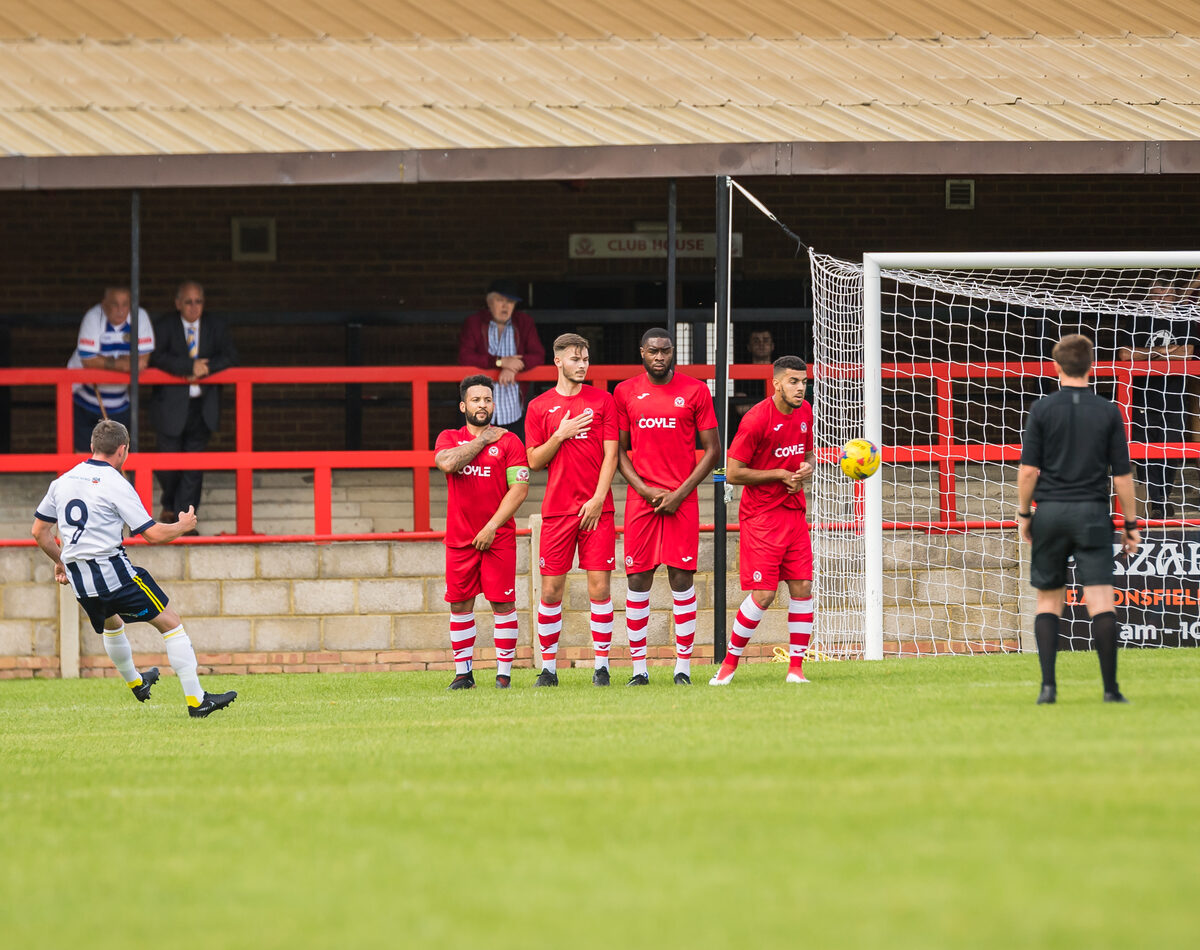 Defensive solidity and not conceding are the keys to winning football matches at any level.

Stability is just as essential for success.

With Gary Meakin still having to deal with arrivals and departures from his squad, Saturdays Beaconsfield starting 11 for the visit of Farnborough showed only Five players who began last season with the club and six changes from the midweek defeat to Chesham. So far this term The Rams have fielded 23 players in three games. When Liverpool won the league title in 1982 they used 16. All season!

The first chance of the afternoon came from a Charlie Losasso free kick after Bates was tripped by Seth Owens. Losasso’s dipping effort was tipped over by Liam Beach who did well to claim the resulting corner off the head of Bayley Brown. Beaconsfield continued to press - a smart one two between Losasso and Bayley Brown created space for Charlie to shoot just over from twenty yards. Moments later, sensing that Beach was dawdling off his line, Losasso launched a cheeky 40 yard quick free kick which skimmed just over the bar with the keeper struggling to recover.

For Farnborough there were signs that Joseph Felix and Andrew Sealy-Harris possessed pace and the skill to trouble the home defence but initially the ball would not stick for Connor Cullen or Perry Coles who were well marshalled by Jordan Ajanlekoko and Luke Neville at the heart of The Rams defence.

The visitors first effort on goal came on 14 minutes when the tricky Sealy-Harris broke through midfield and drew a lunging challenge from AJ and a free kick 30 yards out in line with the left edge of the box. Perry Coles sent in a dipping effort curling towards the far post which Andrew McCorkell seemed to have well covered but as the ball dropped in front of him he seemed to be caught in two minds unsure whether to turn it away or catch it. In the end he did neither and the ball spilt from his grasp and was poked in by Connor Cullen.

The goal was harsh on Beaconsfield who responded well with Alex Nolan and James McCluskey combining down the right to create a crossing opportunity for Losasso who curled a beauty to the far post where Manny Williams stooped to head narrowly wide. In the next attack Alex Nolan was well challenged by Andrew Musungu as he headed for the by-line. The resulting corner was punched clear by Beach under pressure from Brown and AJ. His punch was collected by Sealy-Harris who skipped by Wes Daly in midfield and headed direct for goal. His run was eventually ended by a lunging Luke Neville who earned a yellow card for his efforts.

The resulting free kick was almost a carbon copy of the first. Same position, give or take a yard, same taker and same delivery. On this occasion Coles’ effort was smuggled wide by McCorkell who again looked less than convincing or comfortable.

While Farnborough’s front players were gaining in confidence the home defence stood firm and The Rams continued to press themselves with McCluskey and Nolan increasingly prominent on the right flank.

A misplaced pass in midfield created the visitors next chance as Sealy-Harris fed Cullen who was brought down by the telescopic leg of Bayley Brown. A third freekick of the opening half an hour from broadly the same spot. Home fans held their breath after the less than convincing defence of the first two. This time though Coles bent his kick up and over the wall and dipped a beauty into the top corner, just under the bar, giving McCorkell no chance.

Beaconsfield continued to press, Nolan and McCluskey again combined to create space for the latter to curl an inviting cross into the near post where a stretching Beach made a plunging save ahead of Jon Jo Bates.

With two goals to claw back Beaconsfield were pressing hard to try and get something before half time and the game was increasingly open. This played into the hands of the pacey counter attackers of Farnborough with their best late chance falling to Sealy-Harris who blazed over when released by clever the combination play of Felix and full back Musungu.

The Rams could with some justification have felt themselves a little hard done by at half-time and again started brightly pressing forward from the kick off with Losasso and Bates combining. Thoughts of a thrilling comeback were quickly extinguished. Within two minutes of the restart to be exact.

The move of the afternoon saw five players involved in a one and two touch passing movement which transferred the ball quickly from defensive third on the right flank to attacking on the left where Felix delivered a low pull back to pick out the irrepressible Coles who rammed in his second and Farnborough’s third from eight yards.

The game was effectively over as a contest.

James Taylor, who defended well all afternoon, became increasingly prominent with the introduction of Pashaj providing him the opportunity to get forward on the overlap and create crossing opportunities. For all the home sides application, the Farnborough defence dealt comfortably with all they could muster and the Rams were reduced to speculative long range efforts and dead balls which lacked the menace of Coles’ first half efforts for the visitors. To the point that Beach could have brought a deckchair for much of the second period.

Beaconsfield continued to press for something to take away until the dying embers when Charlie Losasso tested Beach with two 30 yard free-kicks. The first sent the big keeper scurrying as it flashed narrowly wide and the second on 89 minutes dipping into the bottom corner with the keeper grasping at fresh air.

Beaconsfield will again feel a little hard done by to be undone by two high quality goals and an individual error in a game they dominated possession and looked well organised in defence for long periods. Farnborough though were good value and clearly illustrated that at this, or any level, it isn’t about having the ball it’s about making best use of it when you do.

The Rams have the talent in the squad to settle into a pattern and a style of play which suits and will bring results. At the moment they lack a focal point going forward and the familiarity necessary to build understanding. The test for Gary Meakin will be finding the right blend and arriving at a settled side who can build and develop as a team as the season progresses. No need to panic it’s a long time until April