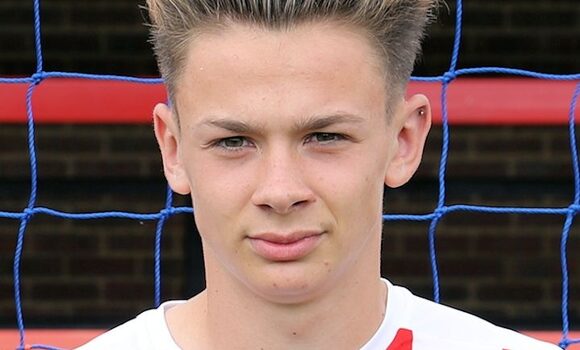 Whoever coined the phrase "a game of two halves" must surely have had this hum dinger of a match at Chestnut Avenue in mind.

For 45 minutes Beaconsfield played some of their finest football of the season, completely dominating their hosts and storming into a three goal lead. For the second 45 they played like they had only just met one another and were completely outfought by The Reds who just seemed to want it more than the visitors.

Right from the off Beaconsfield harried and harassed Northwood, never allowing them any time on the ball, keeper Sam Bunting a virtual spectator. Jack Lyons shot just wide on 5 minutes and Charlie Losasso forced a save out of the brilliantly named Borja Loeches-Teixeira on 11 minutes.

The break-through came on 27 minutes when Ryan Hill - who was a constant menace to the Northwood defence - set off on a mazy dribble and fired off an unstoppable shot that flew past the Northwood keeper. A fine goal applauded by both sets of supporters.

Losasso saw a 36th minute effort pushed onto the post by Loeches-Teixeira but five minutes later he turned provider with a chipped ball to Jack Lyons who delicately turned it over Loeches-Teixeira for another goal of superb quality.

Beaconsfield really were on fire and grabbed a third on the stroke of half time when Callum Bunting was played through and his effort spun off Loeches-Teixeira and into the net.

Northwood are managed by Mark Burgess, an ex-Ram who during his time at Beaconsfield would never give up till the final whistle had blown. He's obviously instilled that ethic into his team as the second period pretty much belonged to them. From being down and out they grabbed themselves a lifeline on 65 minute when a free kick was headed home by Gradi Milenge as the Beaconsfield defence stood rooted to the spot. On 69 minutes Louis Bircham further reduced the arrears as he seemingly strolled through the Beaconsfield defence to fire past Sam Bunting.

Beaconsfield could just not get going, passes were going astray, wrong decisions made, they were rushing things. All that they did so well in the first half they failed to do in the second and their cause was further hindered on 78 minutes when defender Callum Mapley was sent off for a (harsh) second yellow.

With seemingly nothing going for them Beaconsfield were handed a golden opportunity to grab the points on 87 minutes when James Budden fouled Ryan Hill and a penalty was awarded (though the sending off of Budden left many on both sides confused). Up stepped Aaron Berry but his effort was well read by Loeches-Teixeira and Beaconsfield's miserable second half was complete.