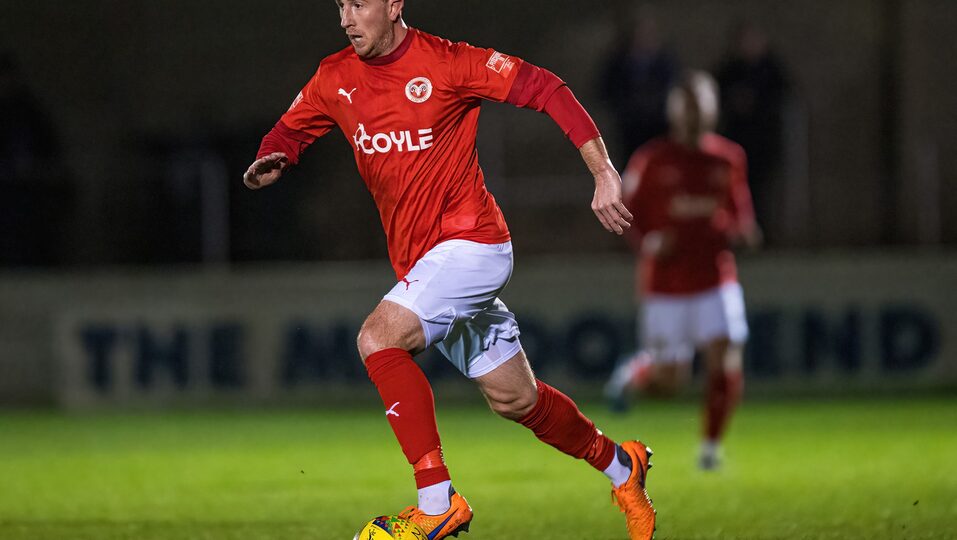 Having earned a last gasp point against Salisbury on Saturday Beaconsfield Town had a rapid taste of their own medicine on Tuesday night at the Meadow where Chesham United scored two goals in the final 20 minutes to snatch a point from the jaws of defeat.

The Rams having not drawn a league game all season have suddenly chalked up two in three days.

Beaconsfield began brightly. Matt Harriott making his league debut in midfield settled in immediately beside skipper Scott Donnelly. The pairing quickly demonstrated why they have both plied their trade at higher level with tidy controlled football and composure under pressure.

As early as the 10th minute Toby Little latched on to a quickly taken Donnelly free kick to guide an angled volley adjacent to the target, drawing a dramatic, if arguably unnecessary flying save from Sam Beasant in the home goal.

Two minutes later Little slid in Olly McCoy whose burst into the box drew contact from Isiah Jones. Who, finding himself on the wrong side, tried to get back goal side of McCoy, standing on his heel and bringing him down in the process. Referee Mr Stevens saw enough to point to the spot and top scorer Scott Donnelly took his goal tally for the season to 7 with his second successful penalty of the week. 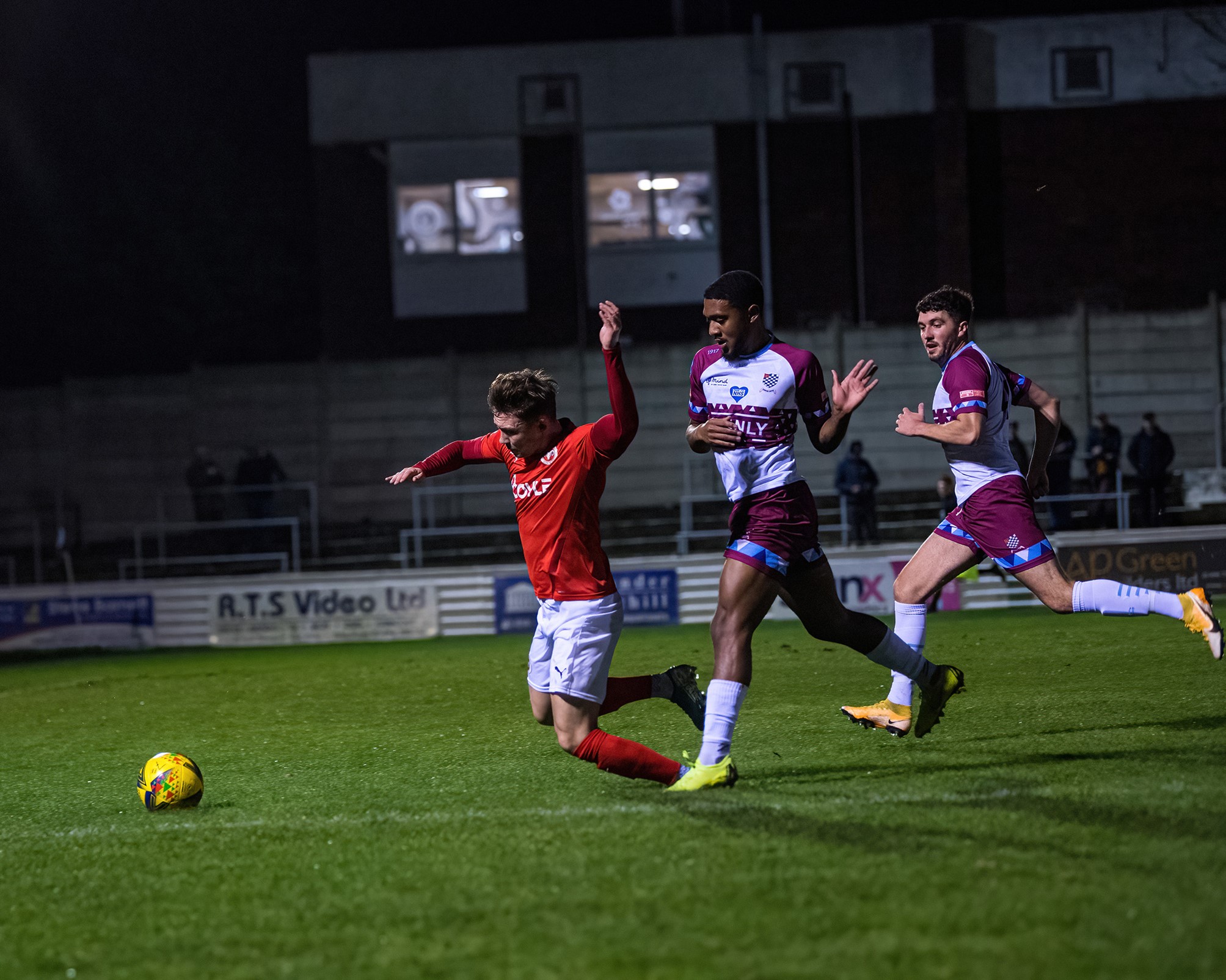 Little and McCoy combined shortly after the goal, this time McCoy returning the favour but Little could not keep his effort on target.

Chesham were not without chances and as the half progressed the grizzled Bradley Clayton began to establish a foothold in the midfield. Their football was bright and energetic but with minimal threat Ayman Azaze was relatively untroubled in The Rams goal, indeed both teams punctuated lively approach play with poor finishes as the half drew to a close.

Chesham continued to improve after the break, dominating possession and territory but the Jordans, Ajanlekoko and Aghatise ably assisted by Olly Sprague and Harry Tucker on the flanks, stood firm under the bombardment and The Rams, with the willing running of Lucas Kennedy Sinclair on the wing and Nathan Minhas leading the line, remained a threat on the counter.

On 77 minutes Beaconsfield added a second after Kennedy Sinclair was fouled after popping up on the right wing. Toby Little’s initial delivery was best forgotten but returned to him off the first defender opening the angle for his second effort, a curling low cross. Minhas’ efforts to get on the end of it caused enough confusion in the home defence that neither he, Beasant or any defender could get a touch and the ball crept in just inside the far post. 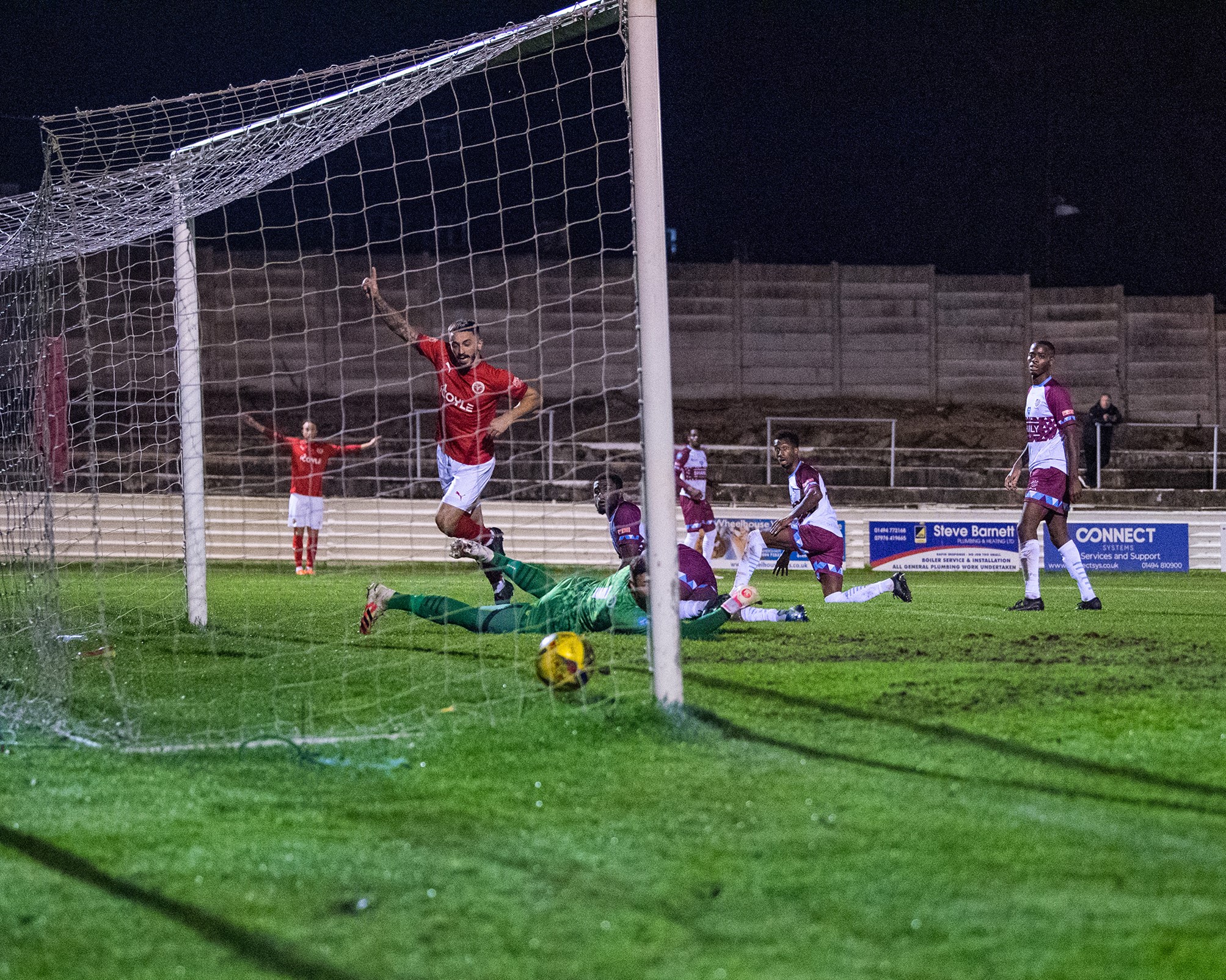 To Chesham’s credit they continued to press and Mr Stevens gave them hope in the 80th minute with the award of a penalty for what he saw as a foul by Olly McCoy. McCoy appeared to get quite a lot of ball with the man and came in from the side rather than behind but its fair to say the more football I watch the less I seem to know what a tackle is anymore.

Thus the grandstand finish was assured, Chesham poured forward, Beaconsfield resisted and tried every trick they could to break up the game and manage the clock. Players, team and supporters indulged in the standard performative outrage at the awful injustice of it all brought about by the scourge of gamesmanship. You know the sort? The same stuff they’ll applaud next week when their team are protecting a result.

Beasant did his best to settle matters early. Meandering from his area in the manner of many a goalkeeper before him who seem to have forgotten that they’re in goal because they aren’t good enough to play out on pitch. 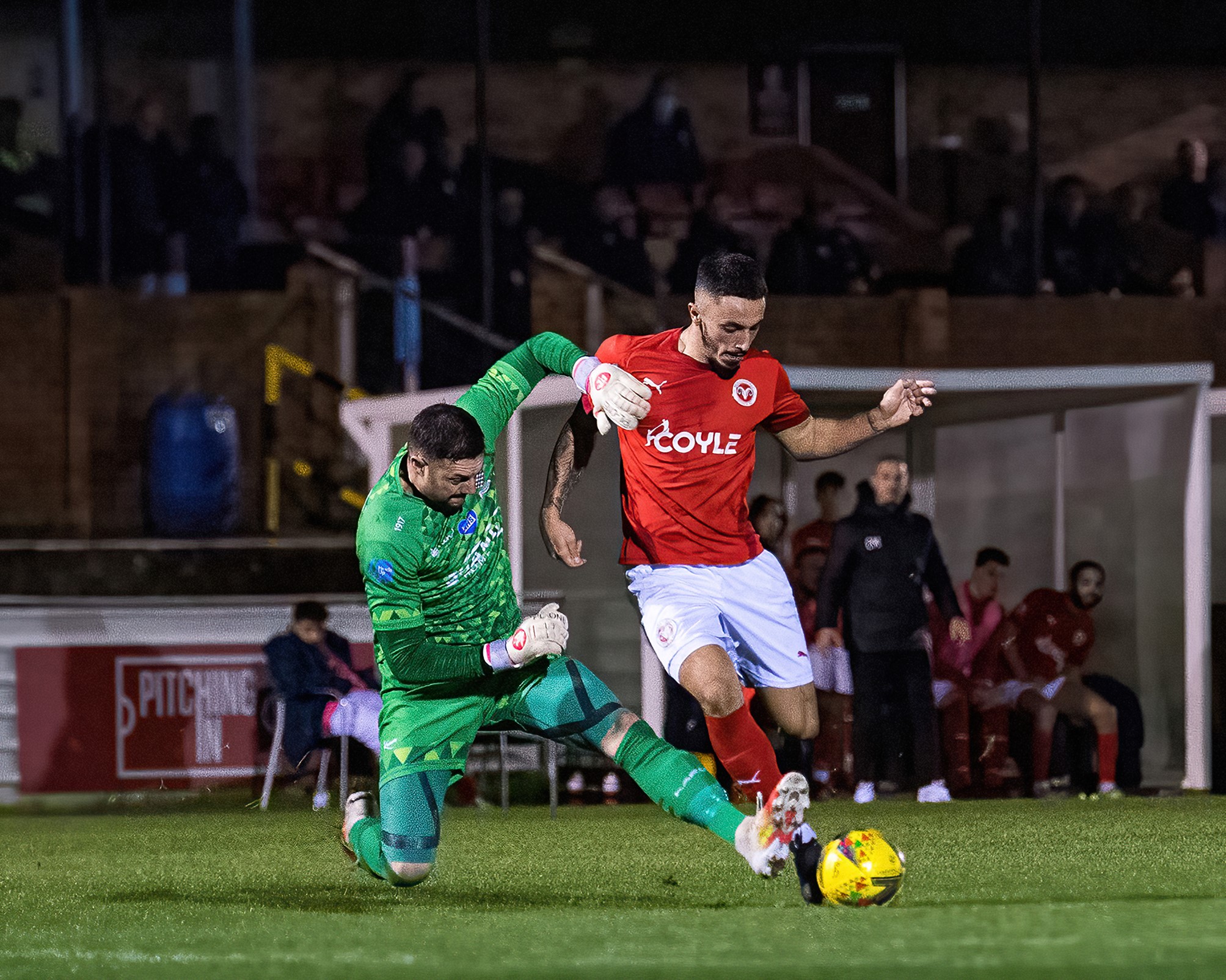 He was dispossessed, from behind, by Minhas. In

collecting the ball the striker found himself with his back to goal and had to turn before attempting a shot. On reflection a set ball to a deeper lying midfield colleague may have been a better option but hindsight is a wonderful thing. Having won the ball through his own graft it would be churlish to criticise him for trying to grab the reward. The turn though gave time for Beasant to recover sufficiently to manage a despairing lunge and make a blocking tackle to spare his blushes and keep the contest alive.

With the renewed hope offered by Mr Stephens provision of seven minutes stoppage time the home side continued to press for the equaliser which came in the 100th minute, one minute from the end. Jordan Ajanlekoko rose to head clear a dangerous cross into the six yard box, only to see his firm connection cannon off the head of Eoin Casey and past Azaze. The second time this week a Rams clearance has rebounded into the net.

In the end 2-2 was a pretty fair reflection of the evening but whereas Saturday felt almost like a win, tonight did not feel like a defeat. Far from it

The performance of the back four, albeit a makeshift one, the controlled football in midfield and the attacking flair on show, in the first half in particular, offer more than enough positives and promise of better things to come when Gary Meakin has a fully fit squad to choose from with genuine competition for places.

Next up The Rams visit Margate in the Third Qualifying round of the Buildbase FA Trophy on Saturday. Candy Floss anyone?