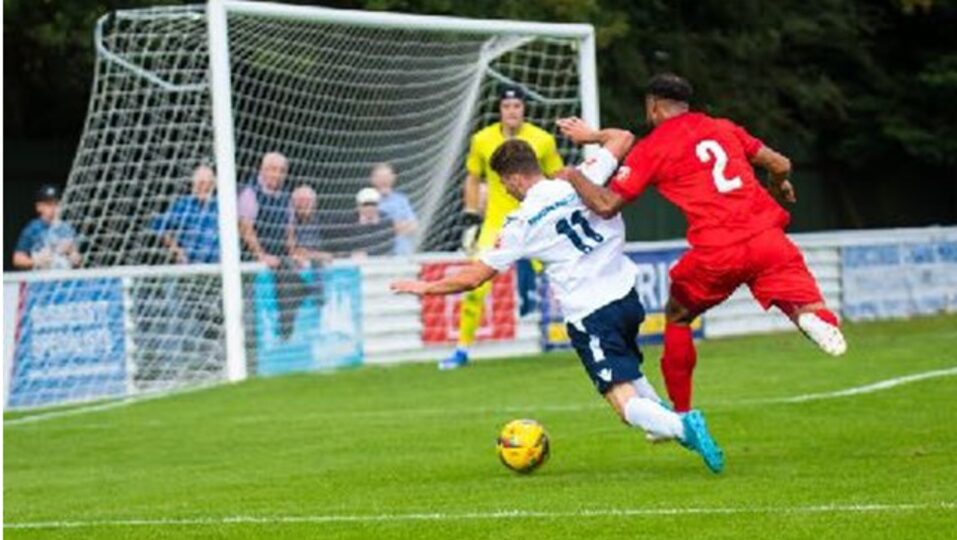 When the referees arrival at the ground is greeted by a cheery, “You’re here that much you ought to have your own parking space”, and said ref goes on to award the home side two first half penalties you might expect a fairly withering match report, as regards the state of the offi- ciating. On this occasion though Beaconsfield Town had no one to blame but themselves. Conceding one penalty in the first half may be considered unfortunate two in 44 minutes is just careless.

You could possibly make a case that the second was harsh on Jordan Aghatise who was as much charged into as anything. That said, the big defenders body position was awkward as was his attempted challenge.

There was considerably less doubt about the first as Marcus Johnstone- Schuster grabbed Oliver Mehew’s shoulder as the winger breezed by him. Wether or not the force applied was enough, on its own, to bring the attacker to ground can be debated. The subsequent award of the penalty can not be.

Home skipper David Sims-Burgess stroked both spot kicks home and in between Mehew was Johnny on the spot to fire home the rebound after William Tunnicliff saw his free header from a 21st minute corner blocked.

The home side also had passable claims for a fourth goal turned down when a scrambling Ayman Azaze may or may not have prevented a low shot from crossing the line after another far post knock down and Scott Donnelly was on hand to clear another effort off the line.

Azaze to had to be on his toes to plunge at the feet of Sims-Burgess and was quickly off his line to block an effort from Mehew which largely summed up Beaconsfield’s first half performance. 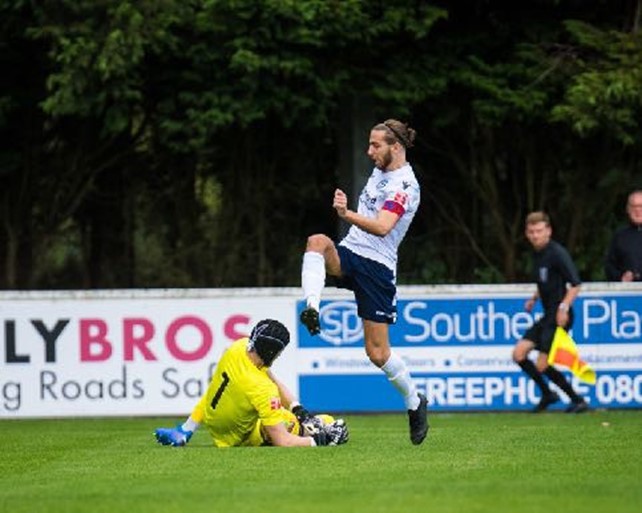 From a Beaconsfield attacking throw the receiver was put under pressure lost possession and one pass put Mehew 40 yards from goal and one on one.

For the first period the visitors created little, Nathan Minhas headed over from a corner before being clattered by the home keeper Andrew Hannah. Carl Stewart saw a goal bound effort blocked to safety and Antonis Vasillou did his best but for all his industry, there was no end product. 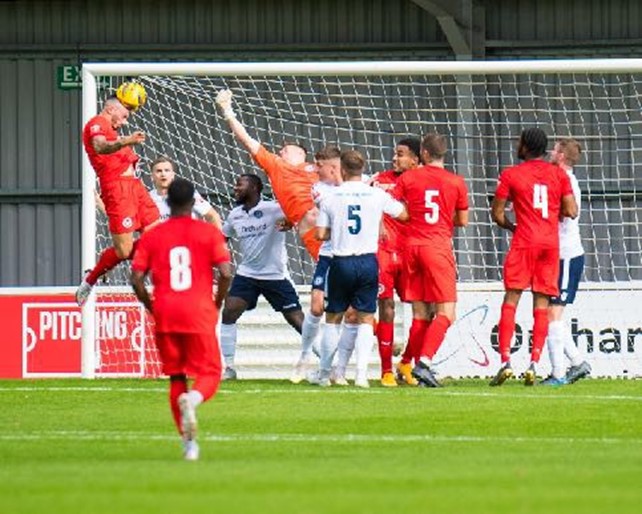 The visitors were either careless or laboured in possession, the crisp passing and movement we are used to was absent. Possibly a strong indication of how central Aaron Minhas has been to the teams identity and success. Absent here after pulling a hamstring in training, his ef- fervescent presence in midfield was missed. No one stepped up to fill that void. 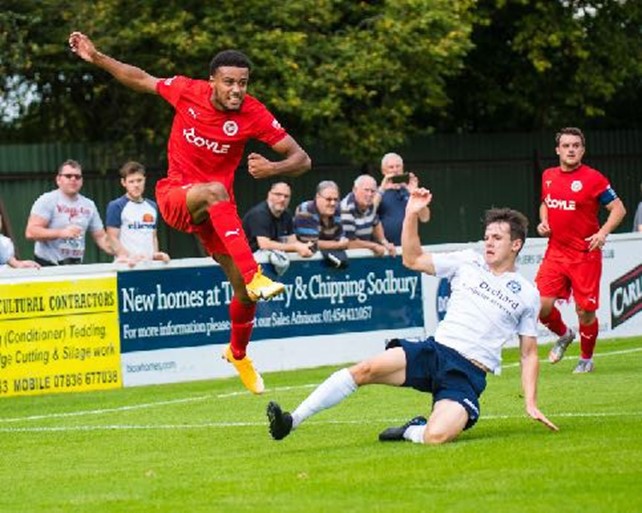 Beaconsfield were better in the second half. That said, the fact that The Rams best player on the day was a second half substitute, Bajram Pashaj probably tells you more than any match report.

He and fellow replacement Olly Sprague combined well down the left flank and at least gave the home side problems but Hannah was large- ly under employed as good approach play foundered with a final ball or was well defended by the hosts who were able to absorb the pressure and snipe on the counter. As they did on 80 minutes when an attacking corner for The Rams was cleared to substitute (and ex-Ram) James Harding who advanced in spledid isolation before driving a low shot past Azaze to cap the victory.

On the morning of the game, I queued for almost 90 minutes to buy the diesel necessary to get me to the match. On reflection I had more fun at the Shell station.

Next up The Rams travel to Hartley Wintney on Tuesday night. Mean- while the U18’s entertain Hayes and Yeading in the FA Youth Cup at Flackwell Heath on Monday evening.