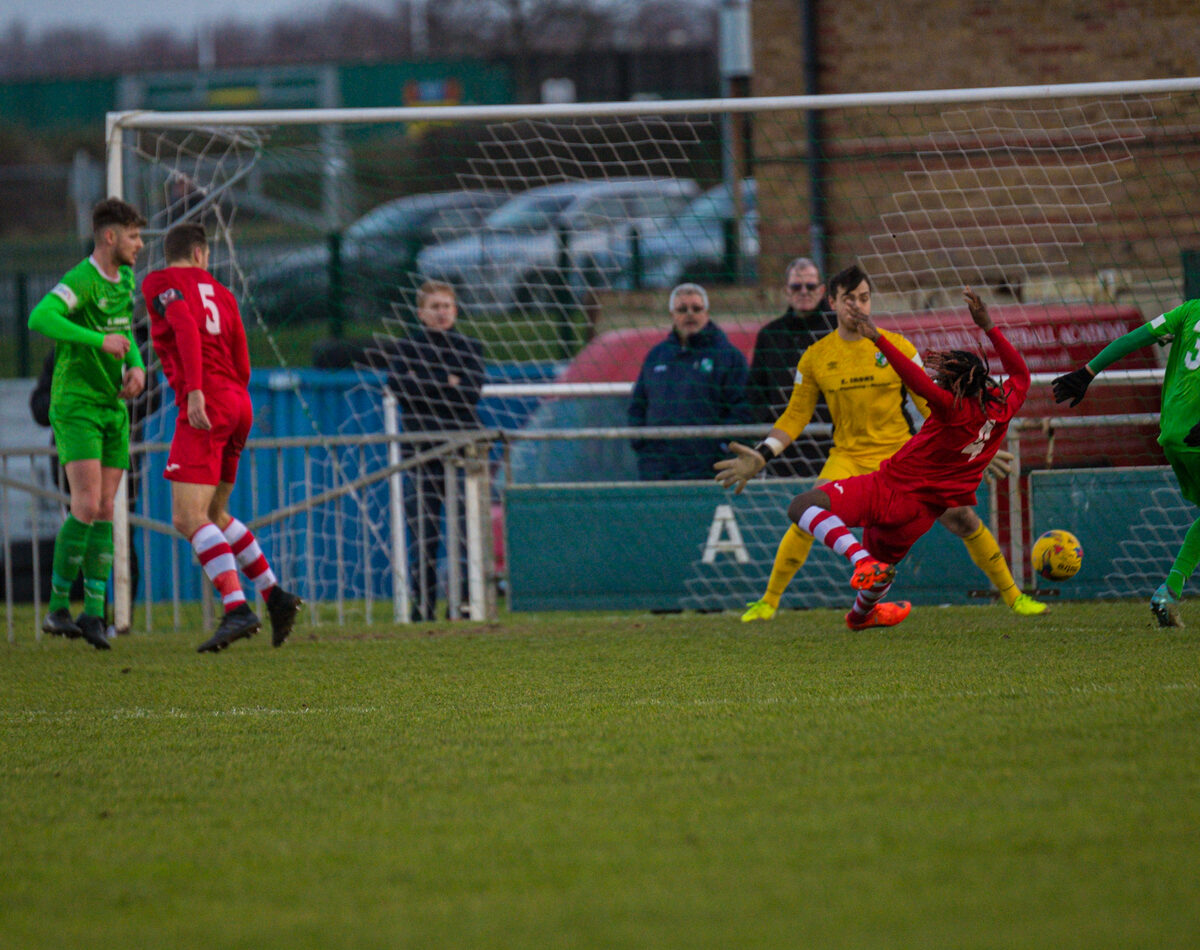 When you are engaged in a relegation battle, if you hope to escape, there are basic things you need. Belief in your team-mates and the system, a willingness to do the hard yards for the cause and the stomach for the fight. You also need a bit of luck every now and then.

On Saturday at Gang Warily [your guess is as good as mine?], home of Blackfield & Langley the remaining members of Beaconsfiled Town 2019-2020 squad showed they had the stomach to scrap for every inch of ground in their fight to stay in the Southern Premier South division.

Whilst former colleagues chose the option of dropping down a division because they don’t enjoy losing every week, the team-mates they abandoned rolled up their sleeves, rode some luck. nicked a cheeky goal and survived a gale and some frankly baffling refereeing to emerge with three valuable points in their fight for survival.

The single goal came in the final minute of a nondescript and scrappy first half in which the home side looked the more likely for long periods, mostly due to their pace on the left flank but they, in common with strugglers everywhere, paid the price for failing to capitalise on the early opportunities they created.

Probably their best chance fell to Sam Griffin, who tormented The Rams down the left wing all afternoon but ultimately flattered to deceive as maddening wide players often will. Found by a Hisham Kasimu pull back from the by-line five yards out at the angle of the six-yard box, the winger blazed over when it seemed easier to score.

That was the home sides only clear sight of goal in the first half though they did have strong claims for a penalty waved away by Mr O’Shea who though well behind the play adjudged that Luke Nevilles desperate sliding tackle on the bursting Kasimu was more ball and man than man and ball. From a long way away it looked a very presentable shout but in fairness to Mr O’Shea, who god knows had his troubles, his assistant made no move to differ. I’d have been a lot unhappier had it been at the other end.

The Rams finished the half more strongly with the ever-willing Jon-Jo Bates shooting straight at Lewis Noice after good pressing in the midfield where Jordan Ajanlekoko, Nathan Webb and Ade Shokunbi epitomised the work ethic of Gary Meakin’s team pressing and harrying all day.

Then a terrific low cross from Nathan Webb across the box seemed to have found Bates at the far post but the striker couldn’t make contact. Louis Stead forced a good save from Noice and moments later a Losasso free kick narrowly avoided Jerome Ecclestones lunging effort at the far post.

Deep into first half injury time Losasso was fouled 25 yards from goal. In typical fashion Charlie picked himself off the turf and curled a beauty over the wall and into the corner with Noice statuesque on his line.

There wasn’t even time to kick off.

Second halves have been problematic for The Rams this year. Too often good work in the first half has given way to a siege by the opposition as Beaconsfield have subsided as an attacking force.

Lately though there have been signs of improvement. With Nathan Webb and AJ Ajanlekoko combining in midfield and the emergence of James Taylor as partner for Mr consistency Luke Neville there is solidity through the spine of the team now and with the return of Jerome Ecclestone there is much needed pace throughout the team.

Pace was Blackfield’s principle weapon. Namely that of Griffin, Kasimu and Luke Rae. Their plan ‘A’ and seemingly only plan for large parts of the game was an out ball up the left wing taking full advantage of the wide open spaces of their huge playing surface and the speed of their front players they looked a threat  early but once The Rams got to grips with pressing high and early to minimise the chance for the early long ball their hosts were funnelled into the middle where more often than not any promise was quickly snuffed out as Beaconsfield hunted in packs to break up play and frustrate their hosts.

It wasn’t always pretty but the hard work out of possession created a platform for Louis Stead, Charlie Losasso, Ade Shokunbi and the ever willing Jon-Jo Bates to create opportunities. Notably Steads driving lung busting run beating four players before feeding Bates who played in Shokunbi whose goal bound effort was blocked.

Shokunbi’s next effort flicked off the outstretched foot of Adam Tomasso and rolled wide of the post with the helpless Noice rooted to the spot. Then Losasso saw a good effort well saved.

At the other end Blackfield had one golden chance to equalise but Bowman narrowed the angle to block the initial effort before plunging forward bravely among the boots to make a smothering claim.

After 70 minutes of tireless effort Bates gave way to Anthony Mendy who showed similar admirable willingness to chase lost causes and press and hurry defenders for the remaining time and although he barely had a sniff of an attacking chance he carried on where Jon-Jo left off and put a shift in for the cause.

Blackfield grew increasingly desperate as they rang the personnel changes but despite flashes their efforts lacked penetration or the quality necessary to breach a resolute Rams rear guard.

Both sides were increasingly frustrated by Mr O’Shea. I think It’s fair to say he will have had better afternoons. He capped his patchy performance here by dealing with a spot of late handbags with appropriate yellow cards. After which he forgot which way he had awarded the original freekick.  He then reversed his decision without recourse to his assistant who had flagged for the initial infringement. Mind boggling!

It was by no means comfortable but The Rams deserved the result if only for the effort, application and spirit on show.It is only one win and there will be many tough afternoons ahead but with 10 points covering the bottom half of the division there is room for a drop of cautious Christmas optimism and still a very long way to go.

Next up on Saturday at Holloways Park The Rams host Hayes and Yeading with free entry to anyone who comes armed with a Christmas Toy for Beaconsfield’s annual collection for our Local children’s Hospital.