No Joy for the RAMS at Merthyr

No Joy for the RAMS at Merthyr 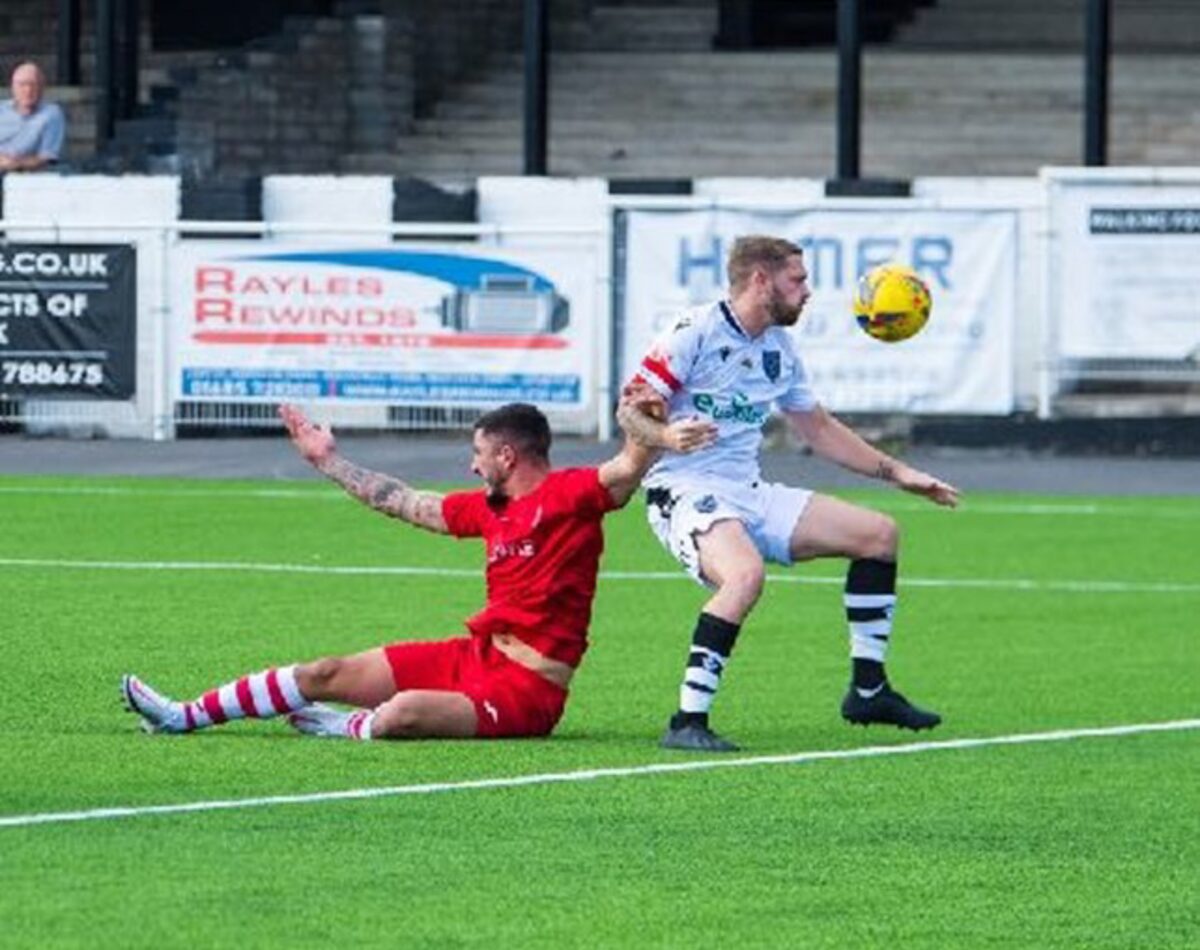 Beaconsfield Town suﬀered their second heavy defeat in a week as Merthyr Town got up oﬀ their relaid 3G carpet to brush a disturbingly lightweight Rams aside in a contest that was eﬀectively over by half time.

Certainly the late withdrawal of Babbs Jarra, who failed a late fitness test, didn’t help their cause. That said his replacement Olly Sprague, returning from his brush with Covid, was Beaconsfield’s stand out player on the afternoon. Calmness personified under pressure and quick to carry the ball out and get things going forward in possession.

The opening exchanges gave no hint of the eventual outcome though as the home side didn’t have a kick for 22 minutes. They were laboured and clumsy in defence. Their midfield looked like they met in the town half an hour before kick oﬀ and the front two were basically absent from the Beaconsfield half.The Rams were utterly dominant and seemingly completely in control of proceedings. 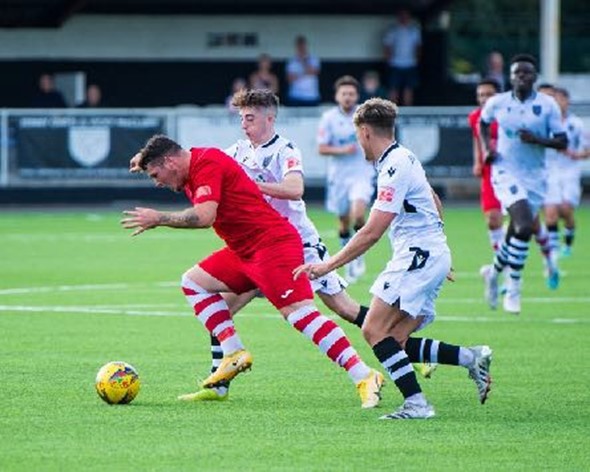 Scott Donnelly and Harrison Bayley ran the midfield flanked by the willing assistance of Callum Webb and Toby Little, who combined well with the ever willing Alex Lafleur on the left.

Up front Nathan Minhas, signed on loan from Hampton and Richmond this week, and brother Aaron were busy and aggressive, creating problems from the first minute for their seemingly cumbersome opponents.

The casual observer of The Rams could have been forgiven for assuming that here was a foregone conclusion. The home side, without a win before today, would concede and then it would be a matter of how many The Rams could chalk up. More seasoned observers knew though that this Rams team need to score when they’re on top. No one could have foreseen the level of capitulation that was to come though.

They certainly had their chances but Steven Cann in the home goal, though under pressure, was seldom over extended. The Rams lacked the ruthlessness in front of goal that would subsequently underline their hosts performance.

Nathan Minhas saw a curling eﬀort from the corner of the box slip wide, Callum Webb saw an eﬀort saved when a better final pass would surely have produced a cleaner strike. As it was, Cann somehow contrived to kick the midfielder’s eﬀort over the bar.

From a well worked corner routine Toby Little was presented with a golden ticket ten yards out but whiﬀed his eﬀort wide.

Aaron Minhas, who could get no love from referee Mr Enever despite being routinely manhandled on a rota basis by the back four, was eventually awarded a free kick in a central position on 20 minutes. Scott Donnelly fired in a swerving, dipping eﬀort from fully 30 yards, With Cann’s des- perate dive beaten The Rams skipper was unlucky to see his eﬀort smash oﬀ the underside of the bar before being hacked away to safety.A goal had to come.

Unfortunately for The Rams, when it did, it was at their end. 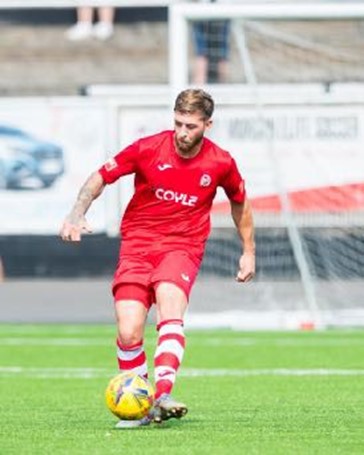 Merthyr took the lead with their first meaningful attack. Frazer Thomas, who basically wrestled the match out of Beaconsfield’s control from this point on, wriggled his way to the byeline and his pull back found Tom Hillman who struck firmly past Tokarczyk from 12 yards to give Merthyr a thoroughly undeserved lead on the balance of play.

No doubt Merthyr did deserve credit for hanging in and taking their only chance but Beacons- field’s response from this point was as much their undoing as any merit or improvement on behalf of their hosts. With over an hour left there was no need to panic or alter their approach. The only material change was the scoreline.
The personnel remained the same.

Discipline and belief in the system and each other was required. They needed to absorb the blow, regain composure, retain shape and keep doing the things they had been doing. This approach should reasonably have kept them in the game, allowed them to regroup, defend solidly and re- establish the platform to dominate again but they were rattled and they didn’t.

Minutes later it was 2-0. Thomas, again involved, was fortunate to win a corner when the lines- man four yards away failed to see a second deflection oﬀ the winger after Harrison Bayley blocked his
initial attempt.

The near post delivery was met by Dan Barnard. His flick come glance fell to Matthew Harris who smuggled his eﬀort in oﬀ the base of far post.

Two attacks and two goals. Harsh on the Rams but still with more than two thirds of the game to go. The Rams could and should have responded better.

As it was the knock-out blow came a couple of minutes before the break. Ismail Yakuba escaped traﬃc at the near post decoy meeting to find acres of space beyond the far post and as Rams defenders struggled to cover to escape the crowd the big defender made it three rising un- touched at the far post heading home from a corner.
Half time 3-0

Gary Meakin introduced withdrew Little and Webb at the interval introducing Dylan Kearney and Tyrone Lewthwaite at half time.

Merthyr though had completed the job. They retained the shape, discipline and defensive solidity that had seemed such a distant prospect in the first 20 minutes.

Having started time wasting unchecked at 0-0 they intensified their eﬀorts unupbraided by the oﬃcials with even the home bench ensuring that replacement balls were securely contained in their bag with the drawstring tied thus maximising the time taken in returning the ball to play.
So it was the game meandered to a finish in the glorious Welsh sunshine.

Any chances The Rams did create were comfortable for Cann who was never really extended af- ter the break and with Mr Enever so obviously unwilling to give anything the way of a Red shirt all afternoon it was no surprise to see him turn away two strong claims for penalties.

First when Nathan Minhas was piggy backed to the floor at the far post as he reached for a Scott Donnelly cross and then later when Dylan Kearney’s sharp goal-bound volley was clearly handled by Barnard. No doubt the ball travelled a short distance at pace but the defenders arms were po- sitioned more for a charge down than in any position one could describe as ‘not making his body bigger’.

For all that Beaconsfield dominated possession again in the second period, It was apparent that Merthyr were comfortable for them to do so, withdrawing a striker for an extra defender just past the hour mark.

In Thomas The Martyrs possessed the games outstanding individual and continued under his prompting to look dangerous on the break as The Rams pressed to get anything from the game.

It was no surprise when Merthyr scored a fourth on 85 minutes as Elijah Phipps applied a clinical finish to another Thomas through ball. In between Alex Tokarccyzk made a good save from a Hillman cross shot and Owen Evans blazed high and wide when he should really have done bet- ter. Both chances created by the rampant Thomas.

Beaconsfield appeared to have gained a consolation when Lewthwaite fired in from close range but Mr Enever adjudged the striker to be oﬀside despite no imput from his linesman. Later the of- ficial indicated he had felt the buzz from his colleague and decided not to seek the confirmation of the linesman actually waving his flag.

Just a note to young Mr Enever, moving forward in his oﬃciating career. Managing the game by referring to players by their first name is a good method if you can pull it oﬀ. When you only use the first names of one side though it doesn’t create a very favourable impression.

Beaconsfield will have little time to lick the self inflicted wounds from Wales though as they entertain the division leaders Hayes and Yeading United who will bring the league’s only remaining 100% record to The Rams temporary home at Kings Langley on Monday. [KO 7.45pm]

They must take the positives from the opening 20 minutes and show the character that this per- formance was so severely lacking.