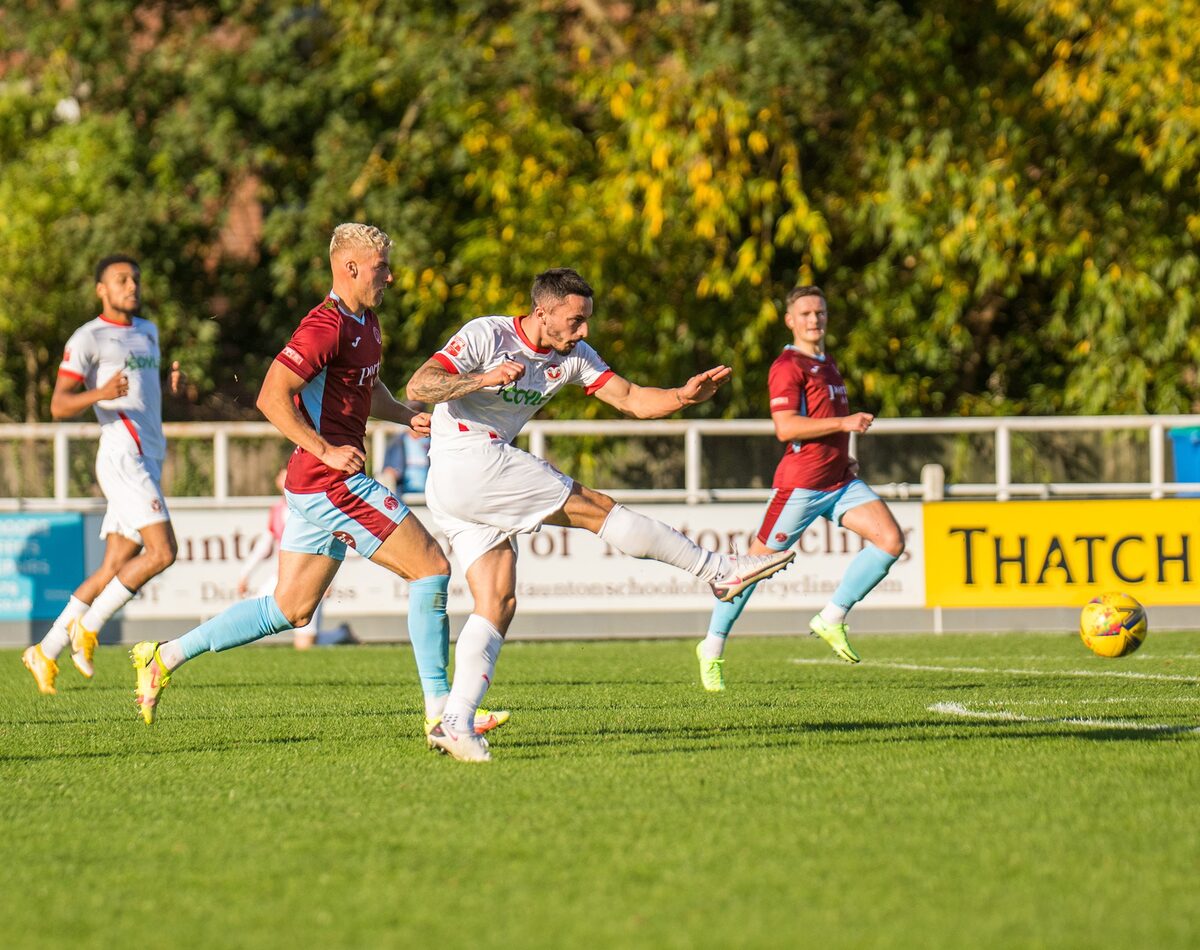 The Rams last played a fixture at their Holloways Park ground on the occasion of Wes Daly’s testimonial match. That was way back on 29th May. Since then their home has been transformed.

The seasons initial results suggested that the team had been too but this outing capped off a string of defeats which may owe as much to travel fatigue as anything. The novelty of coaches trains and automobiles has certainly warn off.

Here though for a fairly soporific opening 18 minutes there was little sense of the mauling to come.

Neither team created much. Beaconsfield played the better approach football and controlled possession while their hosts more direct approach caused few alarms for the visitors. The Rams can feelthemselves unfortunate not to take the lead,  Nathan Minhas’s flick creating an opportunity for Jordan AJ Ajanlekoko to fire in a low shot which had Will Buse in the Taunton goal plunging to his right to make an excellent block. 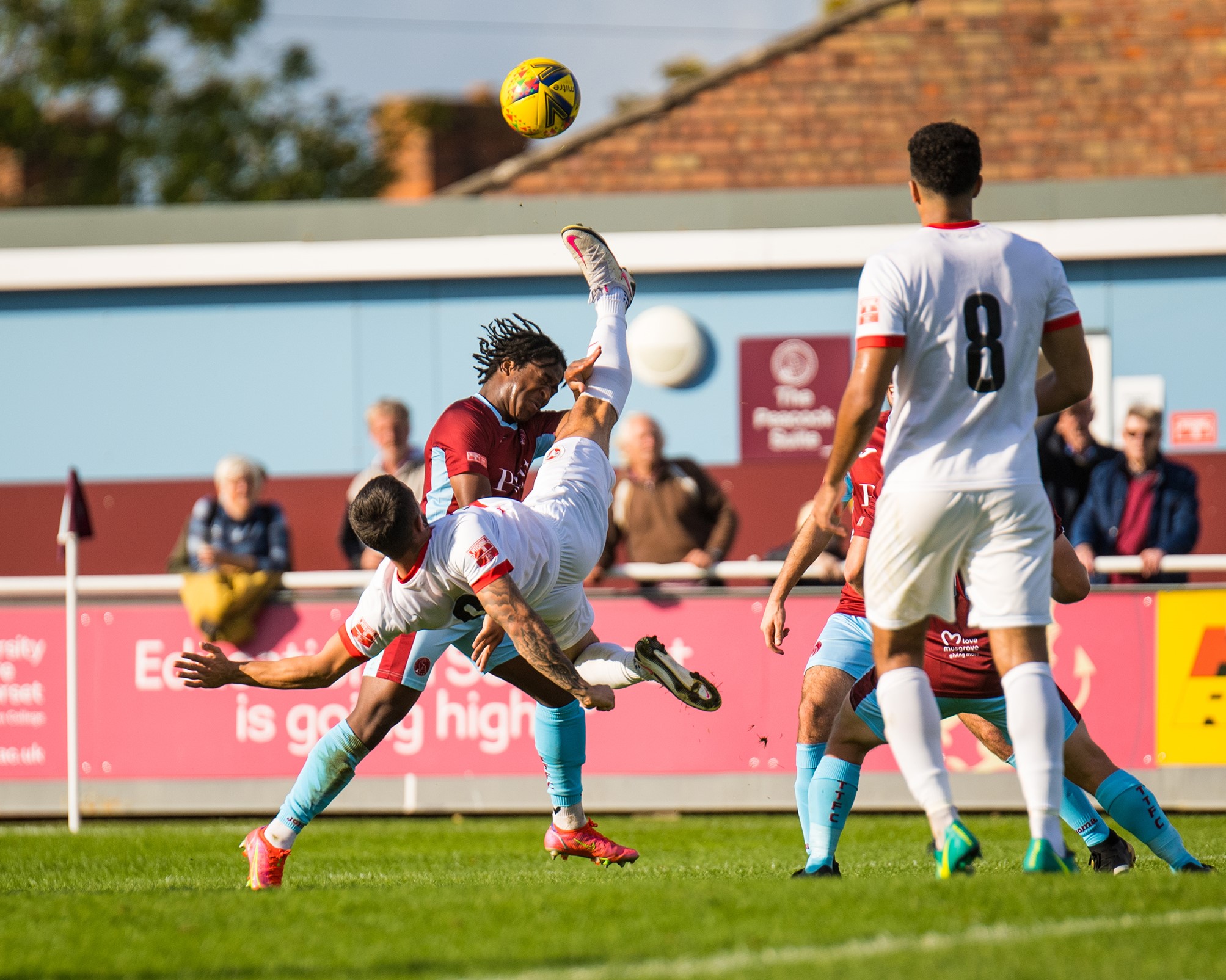 A minute later Taunton were in front. AJ won a tackle in midfield but the ball broke to Toby Holmes and the previously out of form striker spotted Alex Tokarczyk well off his line and let fly from inside his own half his effort flew over the head of the stranded keeper into the empty net. You could be forgiven for wondering if it was going to be one of thoise afternoons after that but in truth the game settled back down to the mundanely mediocre affair it had been before the goal.

As the match meandered into first half stoppage time the home side doubled their advantage. 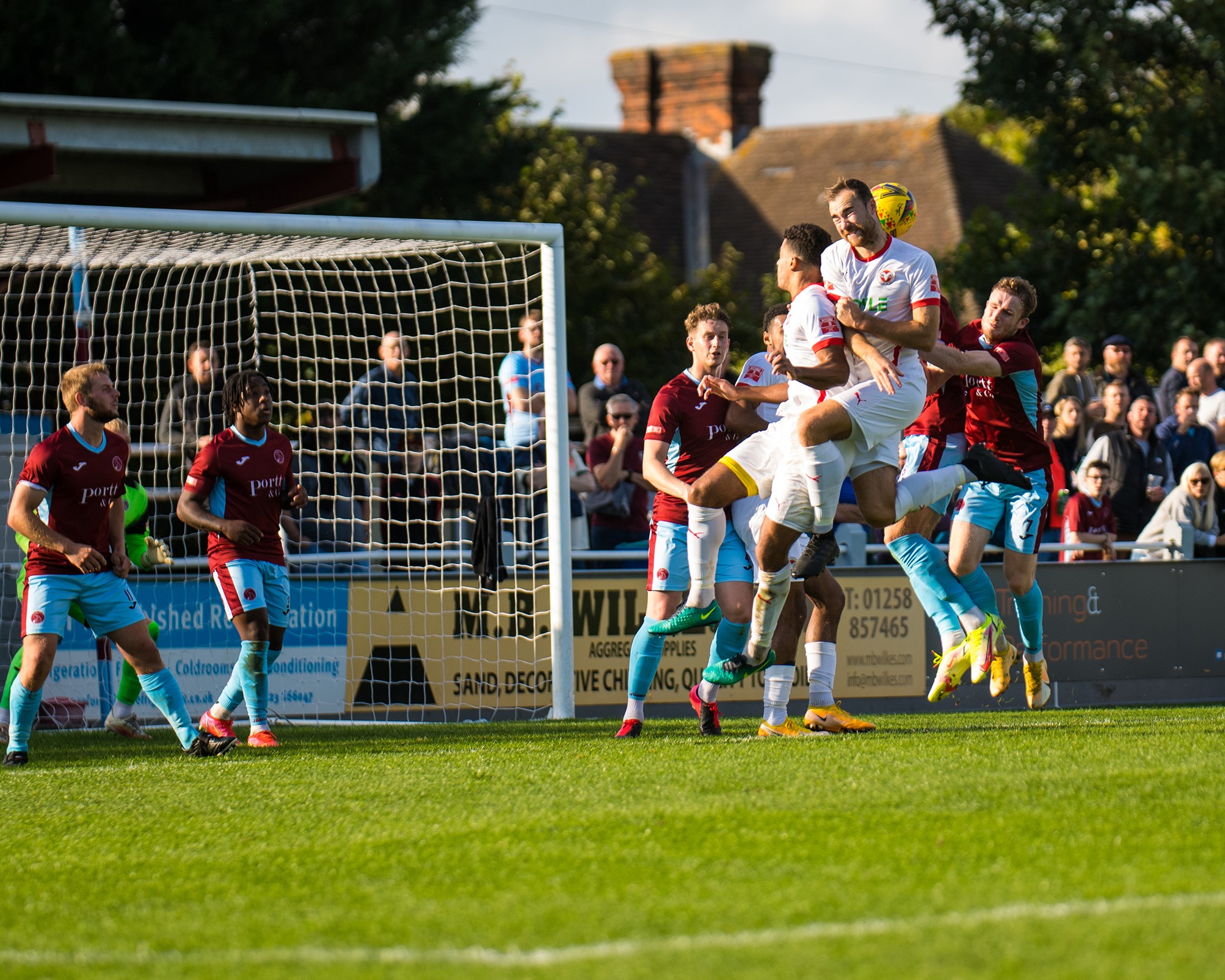 Skipper Nick Grimes played in Ollie Chamberlain who found himself alone on the right edge of the box and his cross picked out Holmes similarly unhindered at the far post and he swept home the second.

Whatever Gary Meakin said to his men at halftime was rendered largely academic on 47 minutes .

AJ was booked for a late challenge in midfield and from the resulting free kick substitute Jay Foulston delivered the ball on to the head of Gethyn Hill who directed his unopposed header over Tokarczyk.

The Rams rallied briefly and got themselves a lifeline three minutes later when Nathan Minhas produced a precise finish from virtually nothing, advancing to strike a low effort into the corner from fully 20 yards out. Even at 3-1 you sensed the Rams weren’t out of it.

It’s the hope that kills you. That and referees.

Enter Mr Staten who in the interests of balance had a decent afternoon by and large but the Gloucestershire official had a shocker on the hour. A long ball fell between Babbs Jarra and Holmes the striker muscled his way past Jarra and crumpled into a dramatic heap. Mr Staten ran towards the incident without indication and seemed unmoved, possibly even intending to deal with the blatant simulation. Obviously having allowed suitable thinking time he pointed to the spot.  Holmes who remained prostrate on the turf following the ‘challenge’ but managed to drag himself to his feet and converted the penalty for his hat trick.

The Rams again rallied. Callum Webb drove narrowly over from the edge of the box and in their next attack Mr Staten evened things upas Foulston was adjudged to have caught Webb as he cut in along the byeline from the right. 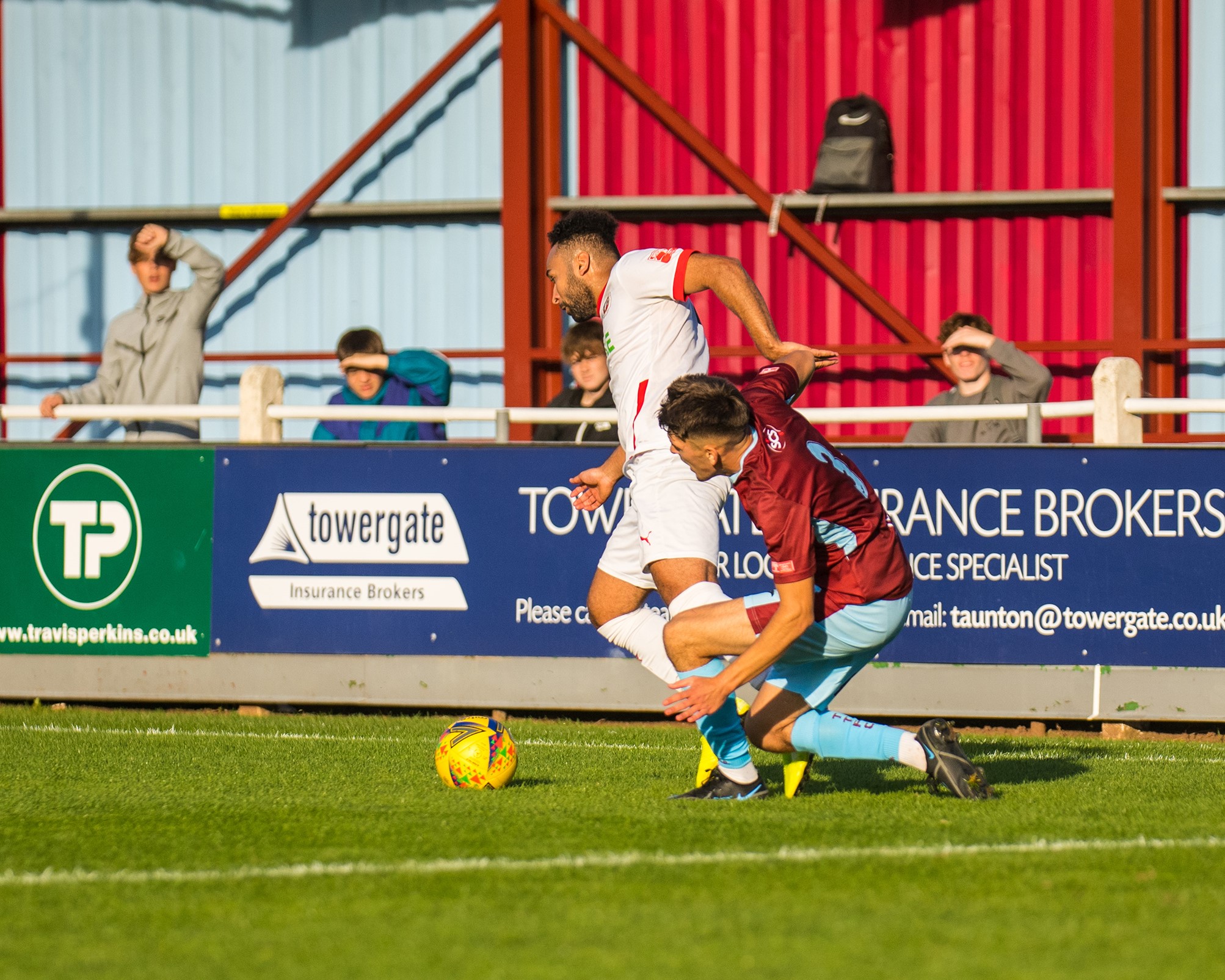 There was certainly more contact than at the other end but even the most partial observer would struggle to classify it as anything other than decidedly soft.

The Rams could not capitalise though. Toby Little elected for placement rather than power but telegraphed his intentions which Buse read with ease to make as a comfortable a penalty save as you’re ever likely to see.

From a Beaconsfield attacking point of view that was very much that. The scoreline suggests it was pretty much over defensively too as the home side padded their win with goals for Ross Staley a stinging half volley from the edge of the box which Tokarczyk got fingers too but couldn’t turn away.

Luke Neville diverted a Sullivan cross into his own net on 79 minutes and then Conor Hartley capped off the afternoon unmarked six yards out smashing a sidefooted finish into the roof of the net.

There was even time for more but Alex Tokarczyk stood firm and palmed away a Hartley header before Mr Staten brought an end to the misery.