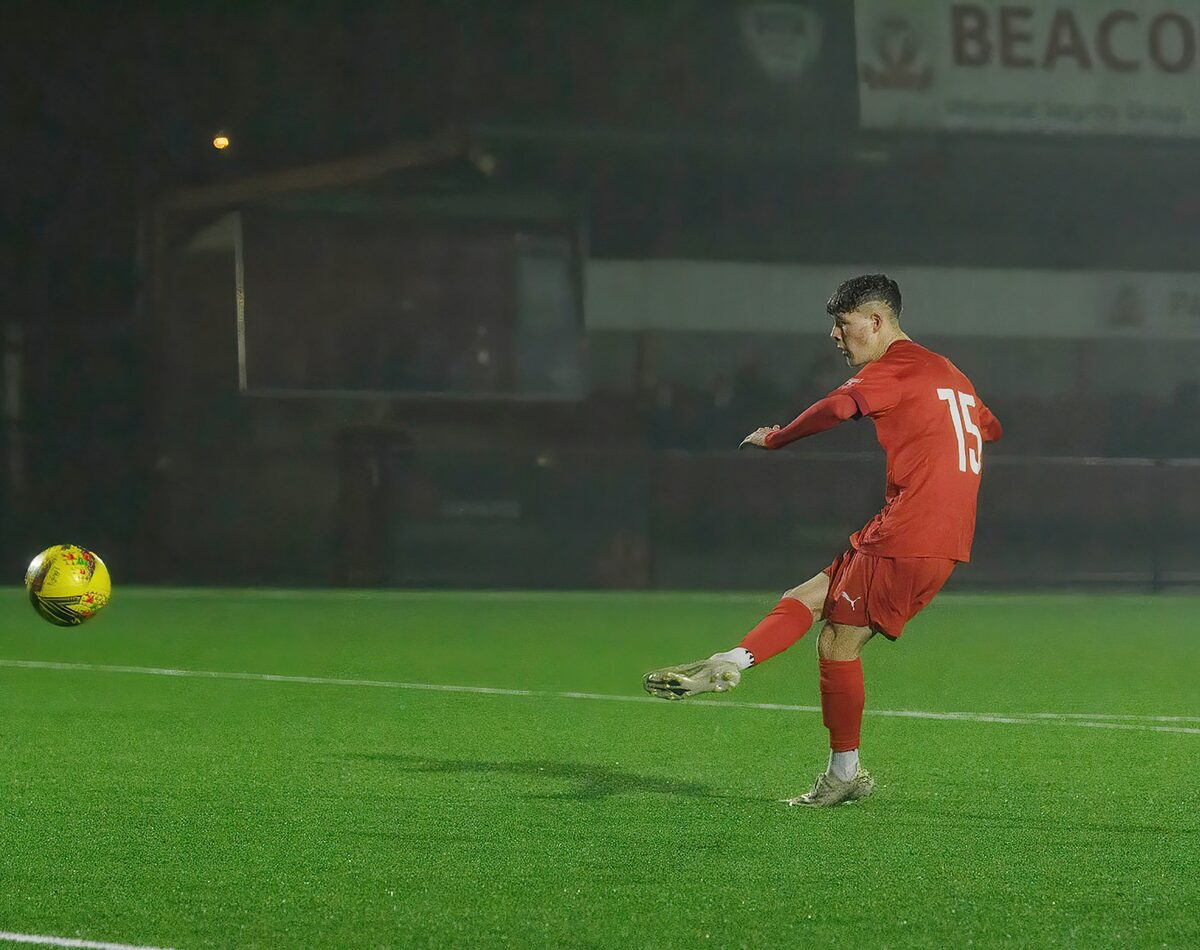 When Jack McKenzie calmly fired home his penalty to make it eight-seven in the shootout and see The Rams into the Quarter Finals of the Berks and Bucks FA Senior Cup, it put the full stop on a cup night at Holloways Park that had just about everything. Save possibly for coherent officiating?

It also served to emphasise the ethos of the new Beaconsfield Town. Match winner McKenzie, a second half substitute. Fellow debutant Dan James, who started at right back. First goal scorer Andrei Chiriac together with Reece Keary and Luca Valentine, in the squad but not called upon here, have all progressed through the Elite development set up and or the academy. Their participation and development emphasising the philosophy of the club under Gary Meakin.

Meakin rested a number of automatic starters giving a full debut in midfield to former Fulham prospect Ryan De Havilland, currently on loan from Barnet. Luke Neville returned to the heat of battle at the heart of the defence after a long lay off with a knee injury, as did another long term absentee, second half substitute, Jerome Eccleston. 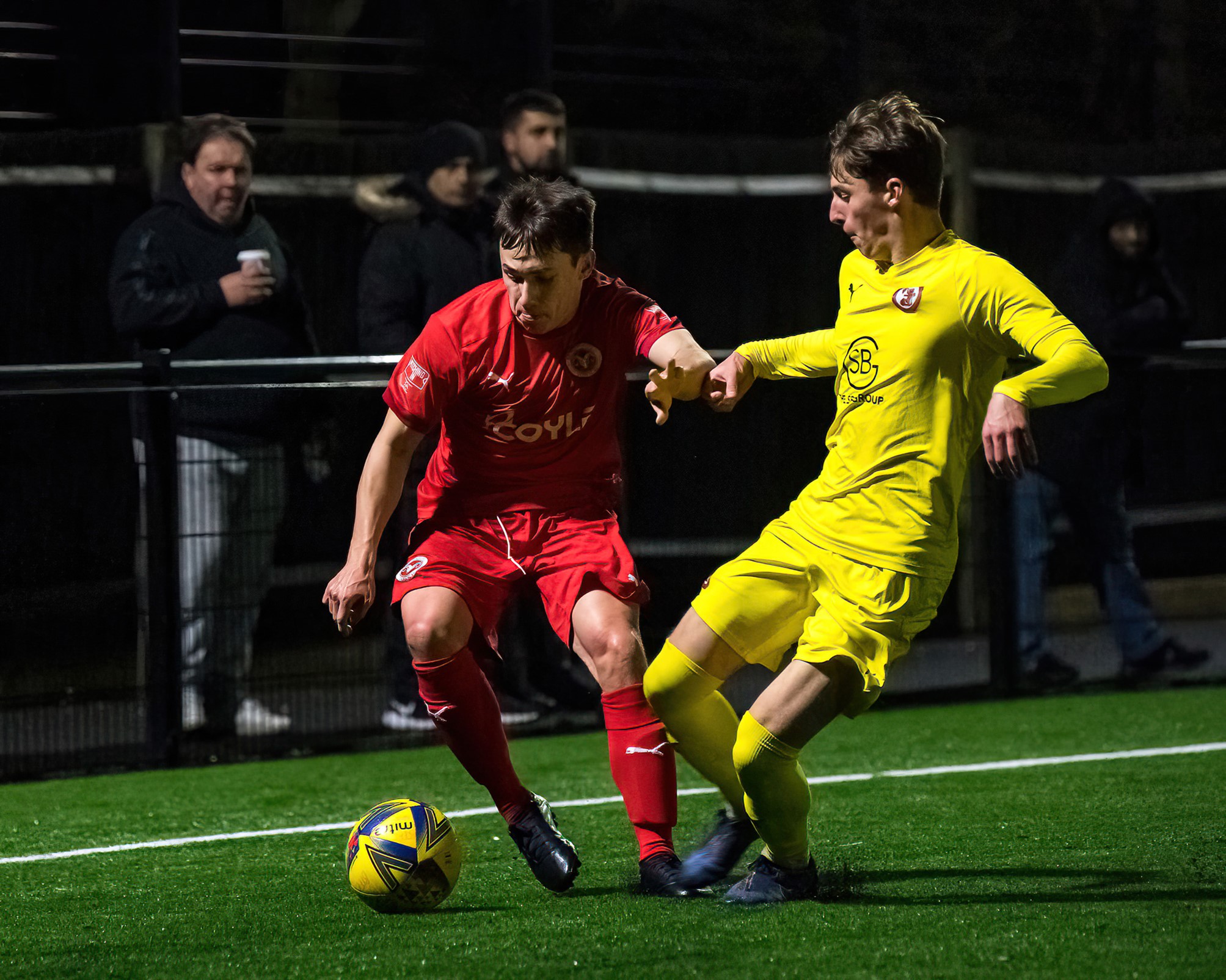 His first outing since the visit to Farnborough in early November.

Matty Harriott, Callum Webb, Aaron Minhas and Bajram Pashaj were afforded a well deserved evening off while Toby Little awaits the results of a scan on his injured knee which will determine the timescale for his return. On paper though despite the many changes the team looked strong with a good blend of youthful exuberance tempered with experience and ring craft particularly at the back.

This was born out by the opening ten minutes where The Rams dominated possession and territory and ran their Step 6 opponents in a manner commensurate with the gap between them. However they failed to trouble Ben Lewens in the visitors goal despite their early dominance and Sandhurst grew into the contest.

The Fizzers were well organised at the back with some lively individuals through the middle of the park, particularly Jack Penton who stood out in the early going and Jude Steinborn-Busse lively throughout. They stuck to their task and their plan before shocking the home side with their first attack. A counter attack on ten minutes, the ball eventually reaching Steinborn-Busse in the area. Despite the attendance of several defenders he managed to get the ball out of his feet and as covering players hesitated he wriggled free and fired a low shot past Ryan Hall.

Beaconsfield took the set back in their stride and the established pattern of the early going continued and they were level within six minutes. A flowing move  reached Dan Bradshaw on the left flank and 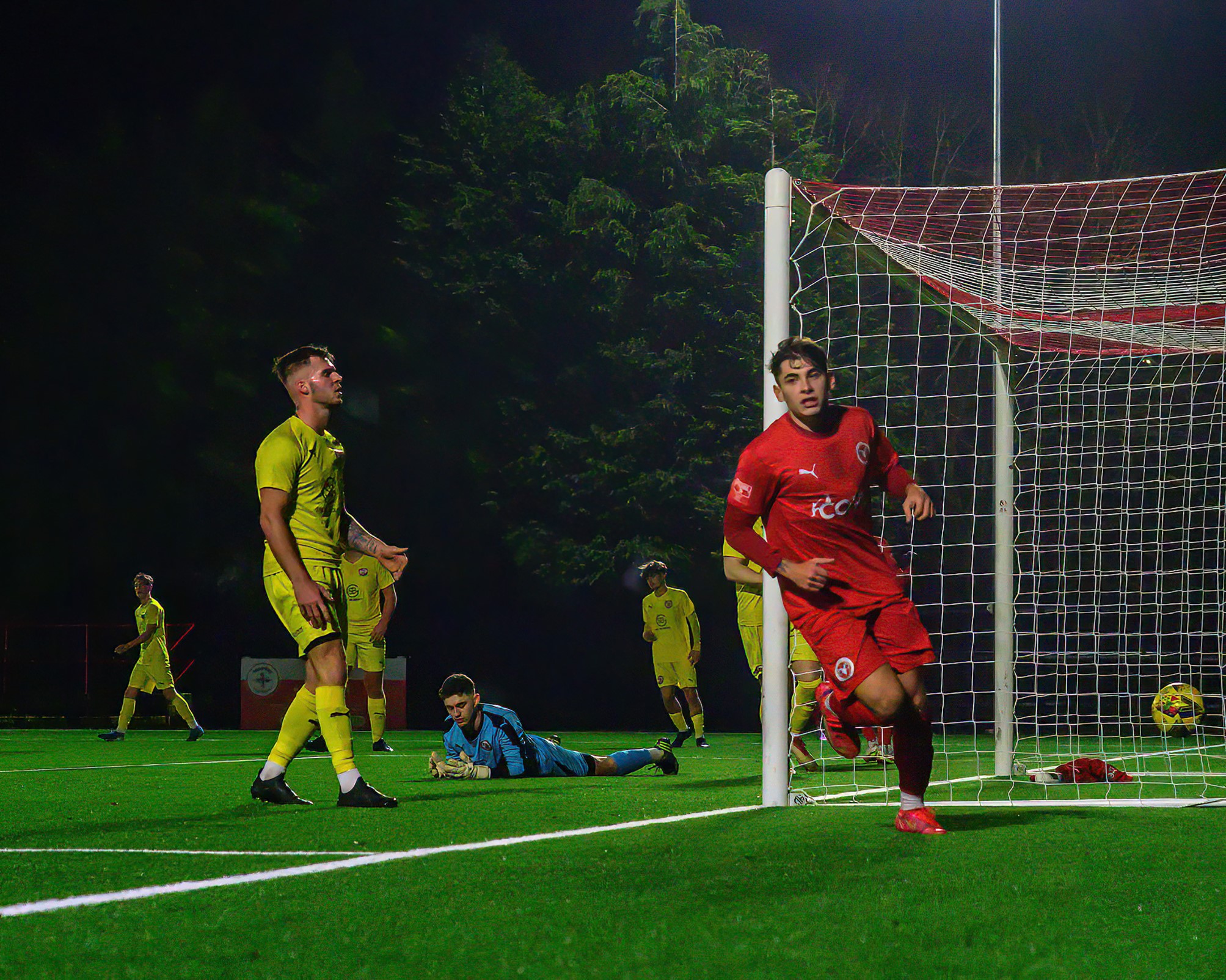 the midfielder fashioned a low out-swinging cross between the keeper and retreating back four. 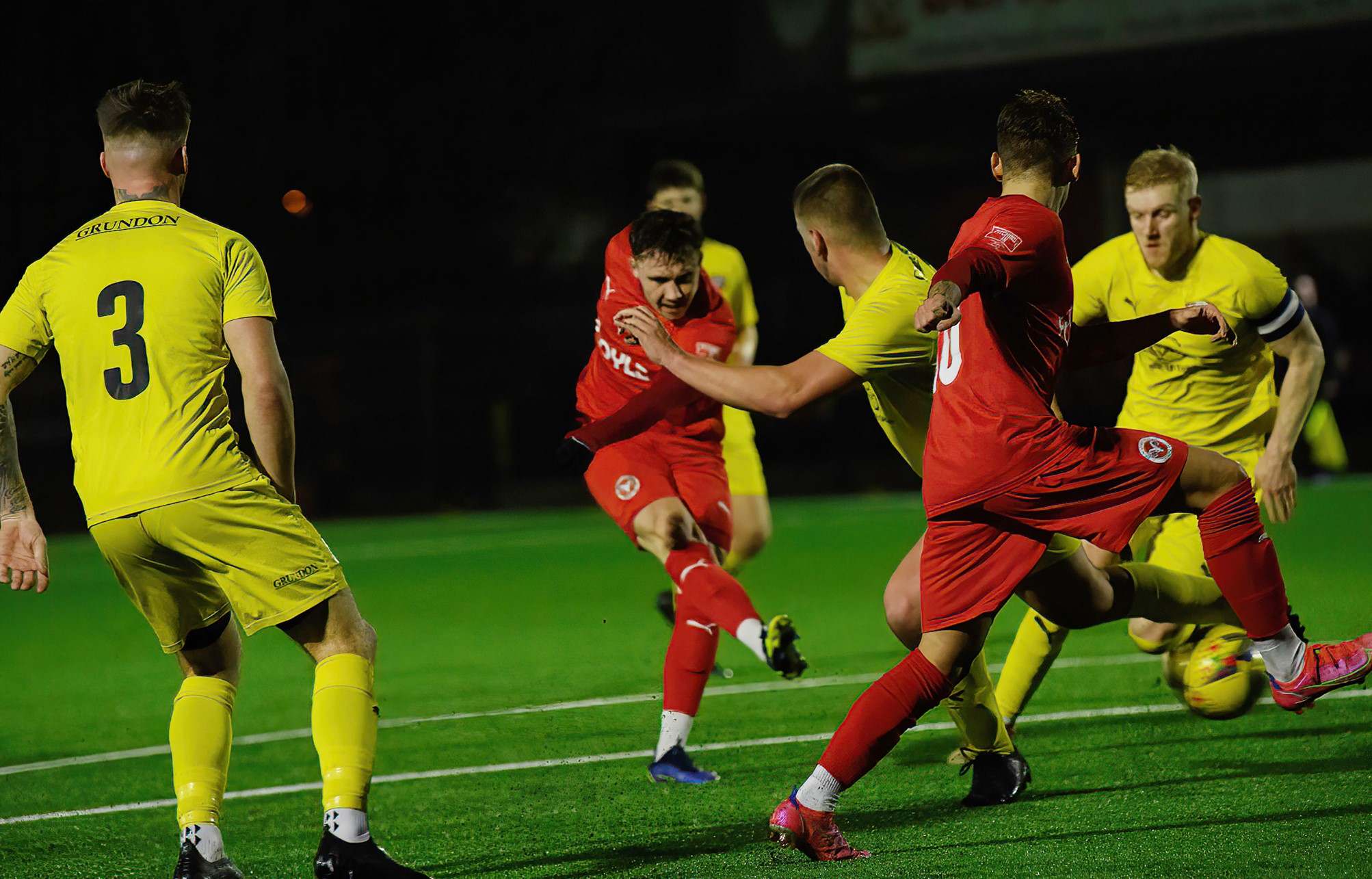 Lewens attempted to turn the ball away from danger but his touch popped the ball up and it fell for Andre Chiriac who tucked it away at the far post.

On 28 minutes the home side were ahead. Dan James stepped in off the opposite flank before squaring the ball into the path of Olly McCoy on the edge of the box. McCoy looked up and arrowed a low drive through a crowd, just inside the post.

Five minutes later The Rams were presented with the opportunity to

establish a cushion. Andrei Chiriac controlled a high ball on his toe, 15 yards out, on an angle. As he attempted to make room for a shot he collided with Callum Wright and went down under the challenge. Mr Paluszkiewcz took the view that there was enough contact to award a penalty. The challenge was a clumsy coming together but there was certainly contact but it’s fair to say it was on the soft side.

Any sense of injustice on behalf of Sandhurst was quickly assuaged as Lewens plunged to his right to turn away Nathan Minhas’ penalty.

The second half started with a bang. With Sandhurst first attack Josh Milo burst towards the area and fell over. Mr  Paluszkiewcz, perhaps trying to even things up following the soft award in the first half pointed to the spot. Whether or not this one was even softer is debatable.

In any event Milo got up and converted the spot kick sending Hall the wrong way. In so doing he appeared to play the ball off his standing foot thereby hitting it twice. Not in the view of Mr Paluszkiewcz, who, for the remainder of the evening, failed to see things happening in front of him whilst confidently awarding free kicks for apparent offences taking place behind him, without recourse to either assistant.

He did though manage to enter into lengthy conferences with both assistants in respect of throw ins. Fair to say I have been playing and watching football for over 50 years and I’ve never seen a lengthy conference over a throw in. That we had two here probably speaks volumes.

Beaconsfield continued to press but Lewens and his defence stood firm often at full stretch until the 73rd minute.

Luke Neville collected a long ball at the centre of the defence and started to bring it clear, Mr Paluszkiewcz reacting to a dramatic cry behind him, decided to award a free kick 75 yards away. In the right back position.

From the resulting free-kick the ball was lumped forward and fell to Steinborn-Basse 25 yards out. His innocuous goal-bound effort took a massive deflection, wrong footing Hall and presenting the visitors with an improbable lead.

Again Beaconsfield stuck to the plan and continued to play their football but as the time ticked down Lewens and his back six and occasionally back nine continued to put their bodies on the line and managed to keep The Rams at bay. With sporadic break aways they managed to induce Mr Paluszkiewcz into issuing Luke Neville with two yellow cards. The second a slipped into lunge was not arguable but the first a roll around the hip by a player initiating contact backing in to buy the free kick? Certainly much more questionable. 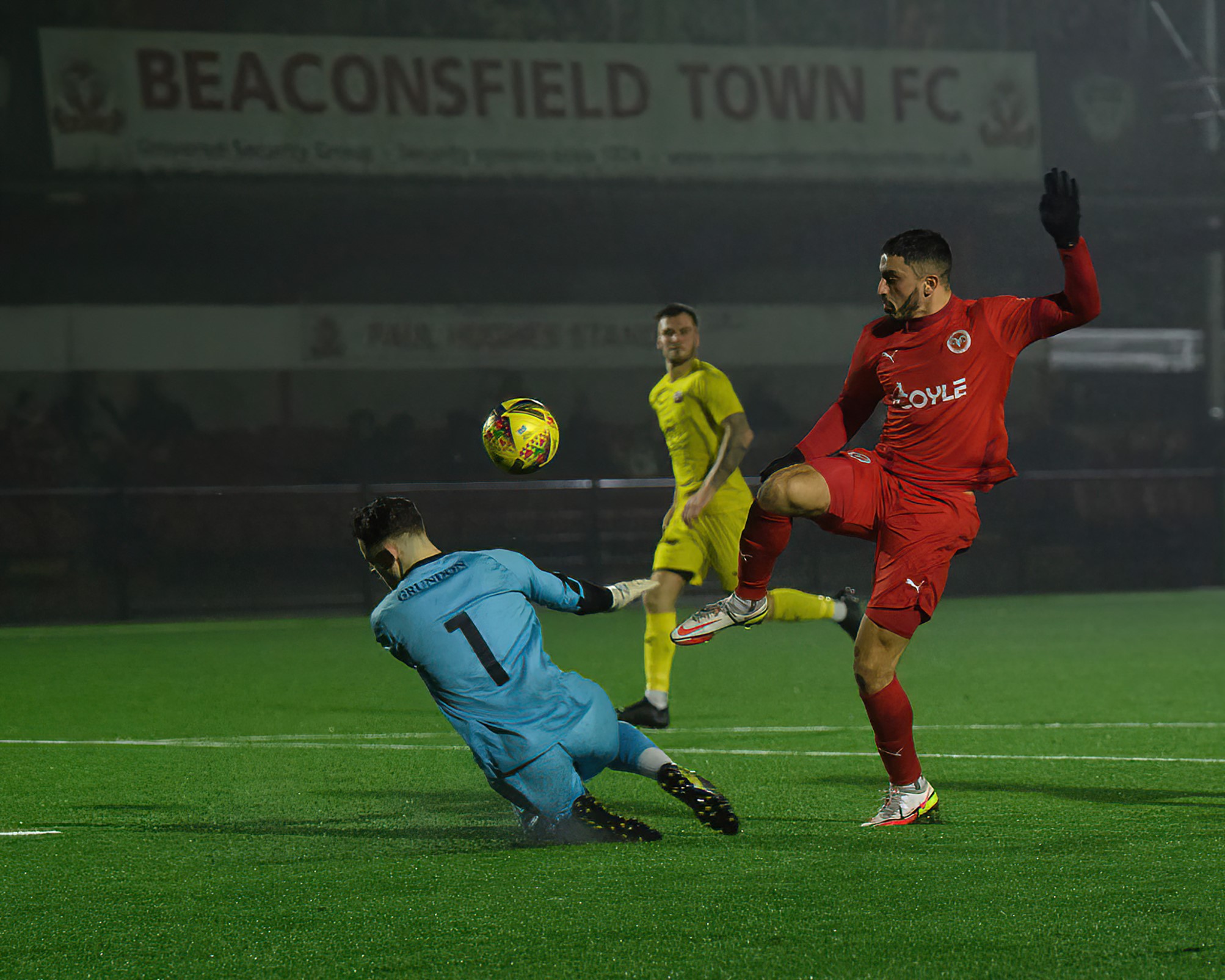 Up against it and with belief severely tested, in the end it was a straight ball up the middle that lead to parity. The centre of the Fizzers defence allowed the ball to bounce, it skipped through into the path of Nathan Minhas who lifted it over the advancing Lewens and beat the covering defender to his own flick before firing home.

The high quality penalty shootout stretched to fifteen kicks and just as we were wondering whether we would ever get home (or ever be dry again!) Steinborn-Basse stepped up and sent Hall the wrong way but saw his effort rebound off the base of the post.

Banana skin avoided The Rams progress to the next round.

Next up The Rams welcome Dorchester Town to Holloways Park on Saturday afternoon.