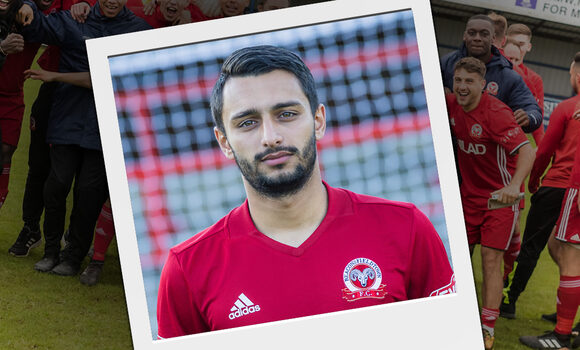 Having played 46 games for Beaconsfield Town in their Championship winning season, you’d have thought that Aaron Minhas was looking forward to a couple of weeks on a beach before returning for pre-season training. However, The Rams “Players Player Of The Season” (not to mention top scorer with 15 goals) is instead getting himself ready to represent Panjab FA in the forthcoming CONIFA Championships that take place in London between 31st May and 9th June.

For those of you unaware of what CONIFA is, it is basically an international football tournament for states, minority stateless people and regions unaffiliated with FIFA. Other participants include the likes of Tibet, Northern Cyprus and Western Armenia.

Aaron played previously in 2016 for Panjab at a tournament near Russia where they got to the final only to be defeated by the hosts Abkhazia. Together with his brother Nathan (an ex-Ram and currently with Maidenhead United) Aaron will be representing Panjab in a group that includes United Koreans In Japan, Western Armenia and Kabylia and they will be playing their three group games at Slough Town’s Arbour Park ground.

Aaron said ”I am so proud every time I get the chance to represent Panjab and the Panjabi people. I am really excited for this World Cup and am very confident in our team and how far we can go. We’ve prepared really well, playing tough games against the likes of Liverpool U23’s and I can’t wait for the tournament to start!”

Everyone at Beaconsfield Town FC wishes Aaron all the best for the CONIFA tournament.