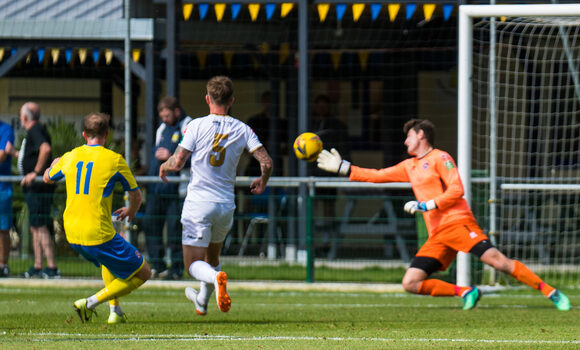 Toby Little’s 24th minute strike was the difference between the sides at a sun drenched Bolitho
Park on Saturday afternoon as a belligerent Beaconsfield Town scrapped and scrambled their
way to a deserved victory despite being reduced to ten men in the 78th minute.

On loan goalkeeper Aymen Azaze saw red after receiving a second yellow card, from referee
Thomas Holden, after raising his hand to shove Ryan Brett in the chest. Having previously been
booked for time wasting, there was no arguing with the decision. The keeper over-reacted when
he felt the Truro player deliberately attempted to run into him as he came to collect a through ball
at the edge of the box. He may be right and certainly the run continued once he was in possession
but the winger is entitled to try and put the big keeper off and no contact took place. Whatever
the intent the reaction was disproportionate and damaging at the best of times but in circumstances
where he was already on a booking it was inexcusable.

That said he is only 19 and will surely learn from it. With Alex Tararczyk, ruled out 15 minutes
before kick-off with a re-occurrence of a strained calf muscle, available on the bench to see out
the last few minutes and stoppage time though damaging it did not leave The Rams with an
unqualified outfield player in goal.

It was a great shame for the debutant keeper who announced himself on eight minutes plunging
to his right and saving Tyler Harveys penalty after Mr Holden decided Scott Donnelly’s handball
was deliberate enough to deserve a penalty despite only one appeal from a City player.
Fair to say on this evidence referees are just as confused as everyone else on the proper
interpretation of the current handball law.

The young keeper made a number of good saves in his 78 minutes, the best of which saw him fly
to his right to push away substitute Zac Hartley’s shot as it curled towards the top corner.

Truro will feel hard done by but they allowed themselves to become embroiled in a sense of
grievance about almost every decision. Or maybe it’s a tactic and they do it every week, maybe to
try and influence officials in their favour.

I don’t like time wasting whoever does it and Beaconsfield pushed the very bounds of game
management from the moment that Toby Littles sweet strike put them ahead with virtually their
first effort on target.

That said, if Truro do play with this degree of a chip on their shoulder all the time I’m grateful that I
don’t have to watch them every week.

That The Rams took the lead though was indicative of the whole piece.
Truro play decent football, wing backs front to back quickly, get it down, get it wide, deliver with
quality and fight for second balls.

In the first half they played with tempo and enthusiasm and created pressure, enjoyed a majority
of territory and possession but it was all a bit frantic. They lacked the composure and ‘Ice in the
veins’ necessary at the key moments.

Beaconsfield, though pressed and stretched at times, displayed a togetherness and spirit
particularly when Olly Sprague, himself replacing the injured Babbs Jarra, limped off after half an
hour, to be replaced by Kensley Maloney pressed into service as an emergency right back as
Marcus Johnson-Schuster moved to centre half.

Beconsfield took the lead with a moment of real quality. Azaze collected a routine effort and
despite calls from the bench to hold the ball he delivered a well-paced roll out into the path of
fellow debutant loanee and Barnet colleague, Antonis Vasilou who advanced at pace down the
right wing. He cut in towards the edge of the box, fed Toby Little whose first touch found the supporting
Aaron Minhas. Little spun off his defender and Minhas’ return found the midfielder aloneand 12 yards from goal his first-time finish beat the dive of James Hamon and gave The Rams thelead.

Almost immediately the hosts should have been level. Rocky Neal, who tormented The Rams on a
visit to Taunton, was allowed to turn and make space for a shot but did not make a good
connection, his scuffed effort lacked power and Azaze was able to make a low save to his left.

Truro continued to press and Azaze made saves from Rooney and a good one on one block from
Harvey before Vasiliou burst thought the home defence and saw his goal-bound effort turned
aside by Harmon.

The pattern continued in the second half but in truth Azaze was less troubled by efforts on goal
which for the most part, though plentiful enough, wound up wide of the mark. On the break
Beaconsfield could and probably should have made Truros afternoon worse.

Aaron Minhas was unfortunate to hit the woodwork not once but twice. First seeing a fierce
goal-bound effort tipped on to the crossbar and later shaping a delightful effort around the facing
defender and out of the reach of Hamon only to see it canon off the base of the post.
Truro continued to press and moan about Azaze time wasting at restarts. This eventually
culminated in a yellow card for the big keeper, which though generally deserved, was unfortunate
as on this particular occasion at least, half the delay was due to Ryan Brett trying to kid the official
into giving a corner by running to the corner flag with the ball and then leaving it there.
For all that, they produced one moment of quality and Azaze was equal to it turning away the top
corner bound effort from Hartley.

At the other end Tyrone Lewthwaite will feel he could have done better when played in by Vasilou
but the strikers finish was blocked by the advancing Harmon.

Even after Azaze’s exit when reduced to 10 men, late sub Jefferson Louis managed to head wide
when unmarked six yards out. Beaconsfield survived thirteen minutes remaining in normal time
and the nine minutes if not comfortably then with few alarms. A late free kick bounced off the top
edge of the bar but at the other end Lewthwaite, played in by Louis, shot into the side netting
when well placed.

All in all a gritty, determined, together and sometimes unlovely display from the Rams but in a
results business this was a welcome three points for Gary Meakin’s team who have now garnered
nine points from three wins without yet playing a match at Holloways Park.

Truro will feel hard done too. On the balance of play they may have a point but if they worried less
about the referee and concentrated on the obvious quality in their side I think they will get over
their problems at home.

Next up The Rams visit Havant and Waterlooville in the FA Cup. Can’t wait!