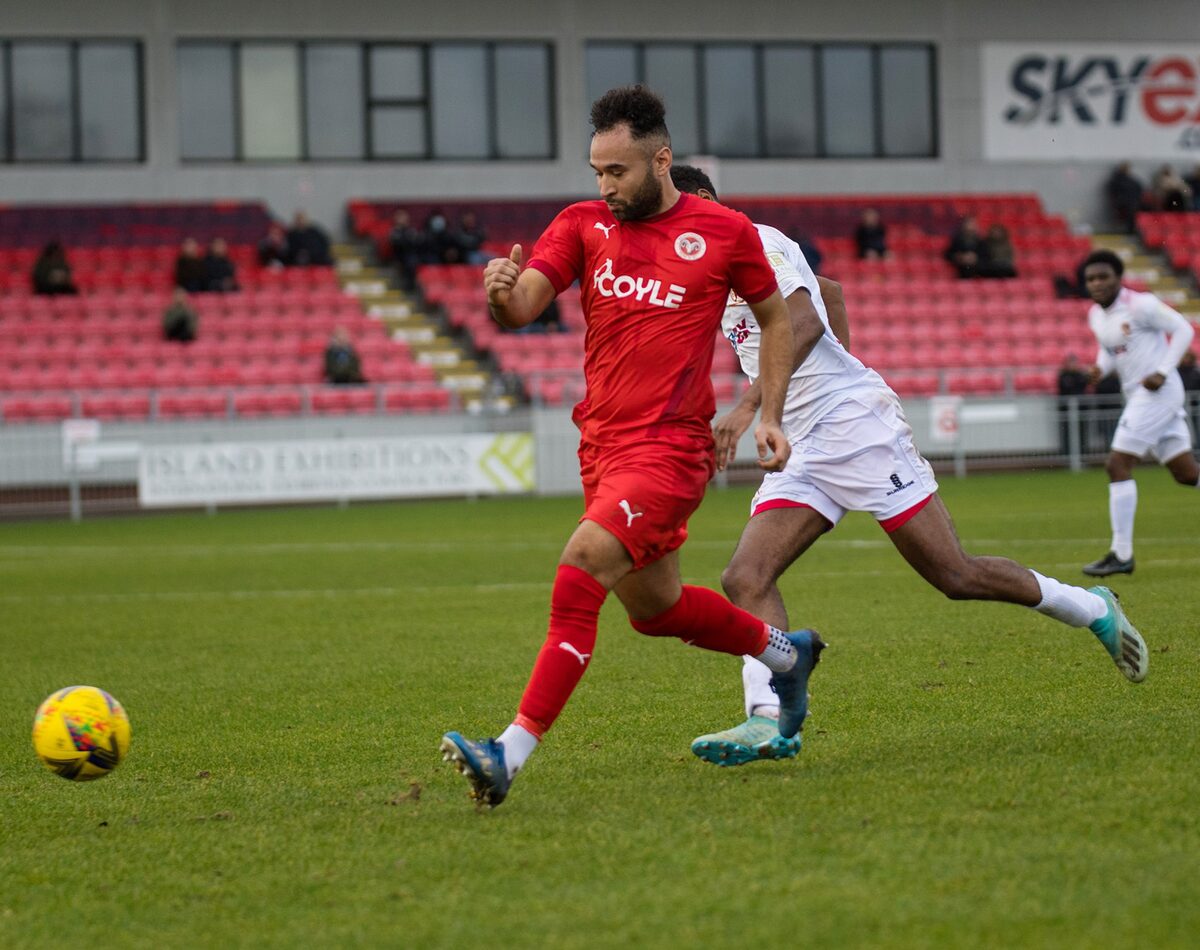 Beaconsfield Town’s supporters probably viewed Monday afternoon’s visit to title contenders Hayes and Yeading as something of a ‘free hit’ in the grand scheme of things. A chance to measure recent progress against one of the Divisions big spending, big reputation, title contenders.

In the final analysis they will probably feel a little disappointed that the fates and a former Rams favourite conspired to see them come away from the SKYex stadium with nothing to show after 90 minutes where they gave their apparently more illustrious rivals more than enough to think about.

So much so that here, as at Farnborough, the home man of the match honours went to their keeper.

The game got off to a bright and lively start with the first effort going to the Rams as Nathan Minhas broke onto a long pass over the top, before forcing former Rams favourite Ravan Constable to make a low block at his near post. 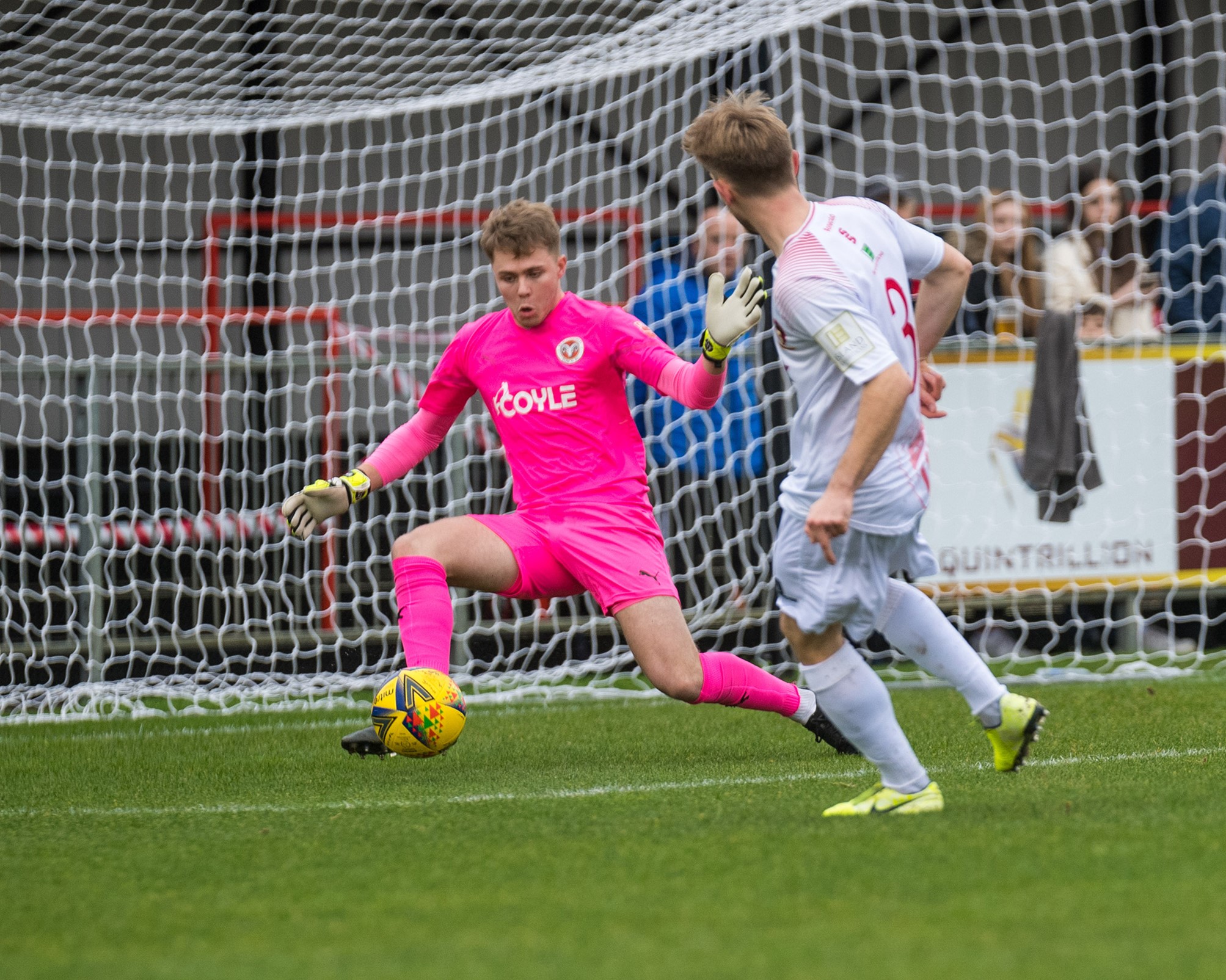 Constable was the busier keeper for the opening ten minutes but most of his work was routine bread and butter handling.

Following the initial skirmishes the home side enjoyed their best period of the game, with Francis Amartey’s pace and trickery stretching The Rams defence and Omar Rowe and Moses Emmanuel combining to carve open the visitors rearguard at will.

Debutant Rams keeper Ryan Hall, on loan from Aldershot and last seen performing heroics against The Rams for Wimborne, saved brilliantly from Moses Emmanuel, advancing quickly from his line before spreading himself to deflect a rising effort onto the top of the bar and away to safety. Before being called upon again moments later when Emmanuel turned provider to play in full back Jack Hall who saw his low shot deflected away by the keeper’s outstretched foot.

With the route to goal established, for 10 minutes the game took on a Fifa-esque quality, familiar to anyone who played the game in the 90’s, where a software glitch had the result that an identical move would result in a goal on every occasion.

So it was that The Rams contrived to concede two virtually identical goals in less than five minutes.

Francis Amartey, exploiting the channel between Callum Webb and Jordan Ajanlekoko, sprinted to the bye line before pulling the ball back sharply to strike partner Emmanuel who couldn’t miss and didn’t!

Hall then parried a Kadell Daniel effort to safety before Amartey again got to the bye line, again in the left channel and laid another goal on a plate, this time for Hassan Jalloh who gleefully fired home from close range beating the despairing stretch of Olly Sprague on the line. 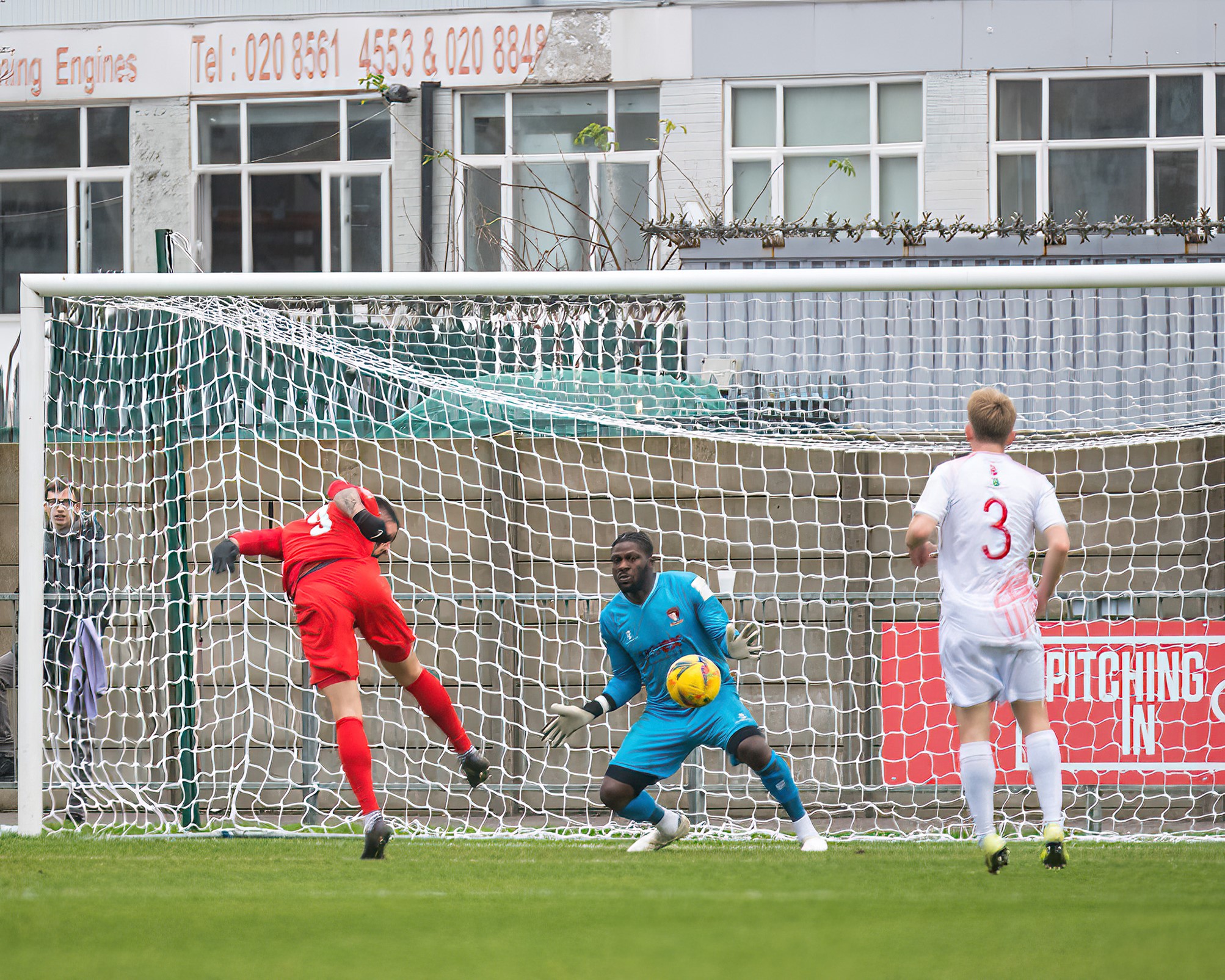 At that point you feared for the visitors but Gary Meakin settled the ship with a tactical tweak and a judicious critique of some of the defending on show.

Once everyone was on the same page and up to speed, The Rams settled to their task.

The home side remained a threat though with Hall again alert to deny Emmanuel. Despite slipping as he advanced the keeper recovered and blocked the strikers effort.

Skipper Toby Little picked out Nathan Minhas who controlled and shot in one fluid movement but it was too close to Constable who held on to it, Then, unmarked six yards out the striker somehow guided a stooping header wide with the keeper seemingly stranded and the goal at his mercy.

The big stopper was further extended as Olly McCoy broke into space on the left of the box with Minhas and Little unmarked on the edge of the six yard box and a moral boosting goal seemingly imminent McCoys cross shot was met and cut out by the telescopic leg of Constable and the chance was gone.

At the other end Emmanuel engaged cheat mode and sent Amartey through in the left channel his steered shot beat Hall and crucially the far post, sliding inches wide and away to safety.

After the break the game continued in much the same vain with chances at both ends. This time it was the visitors who enjoyed the better quality though. Olly McCoy saw a 25 yard free-kick brilliantly tipped away by Constable.

As the visitors pressed the home side were increasingly stretched but still threatening on the break but The Rams were enjoying their most effective phase when the game changed on the hour.

Omar Rowe launched a late clumsy and painful lunge at Toby Little on the edge of the box. On subsequent viewings the tackle owed more to clumsy execution than malicious intent but was still worthy of the yellow card he received, to add to the one he received in the first half. 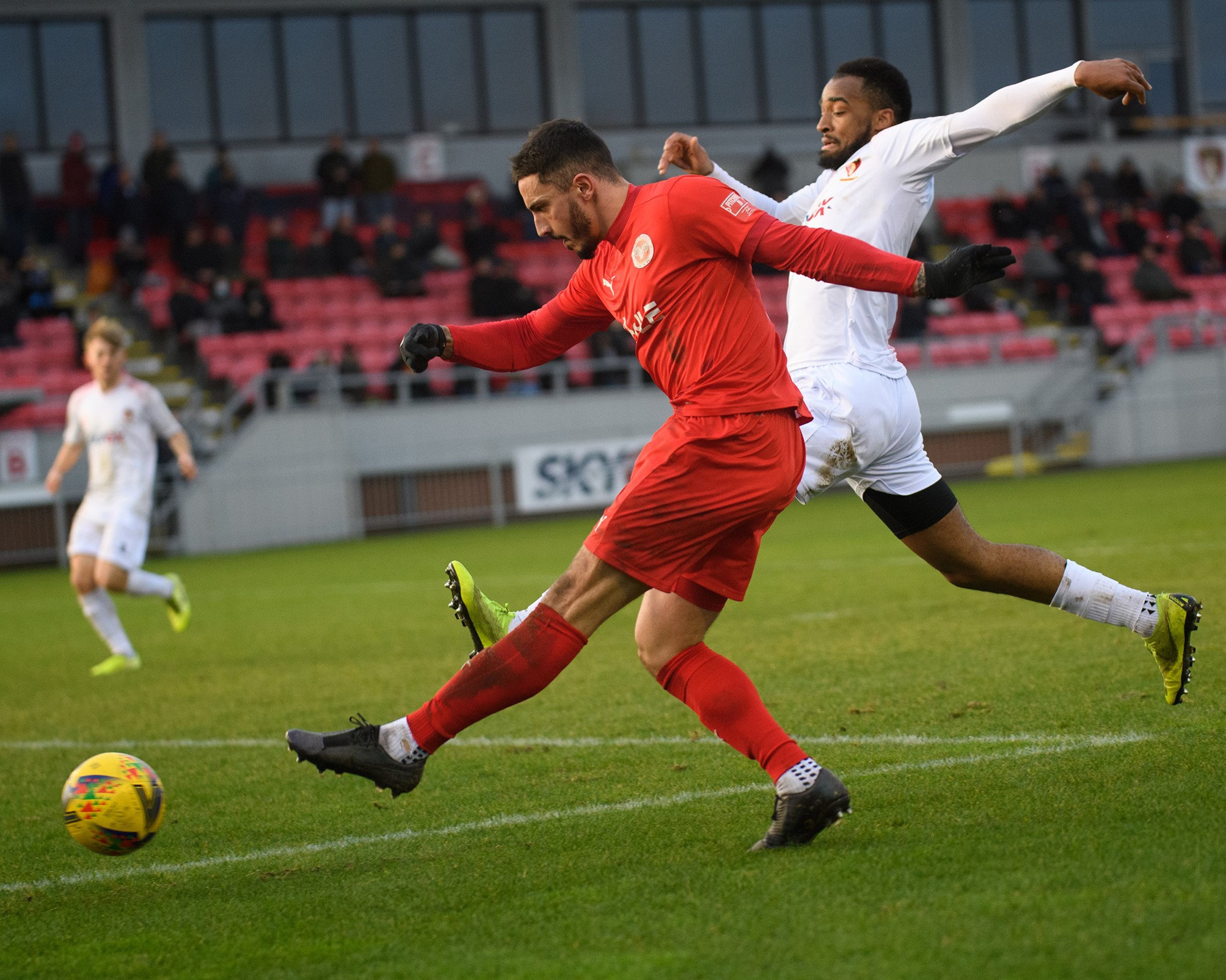 With Rowe exiting down the tunnel to the somewhat perplexing rapturous applause of the home crowd, Hayes reverted to a rearguard ‘game management’ action - for the remaining half hour - largely aided by a referee who appeared to by and large stop officiating after the red card.

As Beaconsfield pressed home their advantage Constable continued to perform heroics, saving twice from Matty Harriott and Nathan Minhas on the second occasion springing up to deny Aaron Minhas any chance at the rebound.

The save of the game saw Constable again thwart Nathan Minhas, who must have wondered what it would take to get a goal after this. He watched in disbelief, head in hands as the big Jamaican keeper flung himself to his left to turn a dipping top corner bound header onto his bar and away to safety. Athleticism owing more to the magic of Harry Potter than noble arts of Harry Gregg. [Ask your grandad]

Just as it looked like Constable was going to be unbeatable his defences were eventually breached. 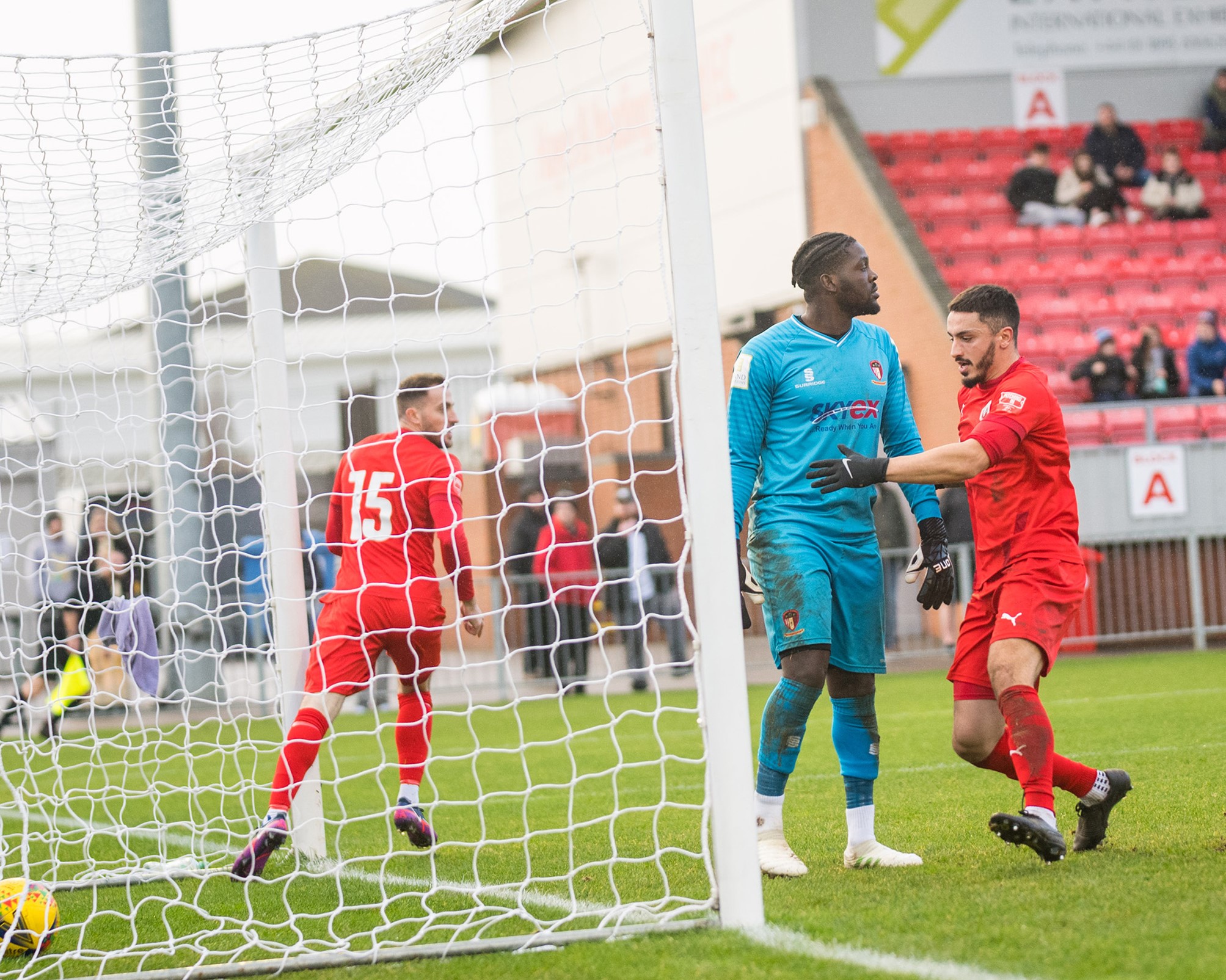 Callum Webb’s angled cross from the right, was met by sub Bajram Pashaj ghosting in at the far post, beating the offside trap his deft touch beat Constable, for once routed to the spot as the home defence appealed in vain for a flag that never came.

After lengthy and angry protestation from McDevitt and the home bench and a conference with the linesman Mr Stratton confirmed the decision and the goal quite rightly stood.

With the home sides game management now turned up to 11 on and off the field, for some reason unhindered by the officials, Beaconsfield continued to press and the Minhas brothers both had chances to secure the point that was the very least the visitors’ performance deserved.

Again though a combination of Constable and not the best of finishes by either Minhas saw the chances go begging with the keeper and ultimately Hayes coming out on top, without making any real positive contribution to the final 15 minutes.

Next up the Rams will hope for a better return from the constabulary as they welcome the Met Police to Holloways Park on Monday evening.