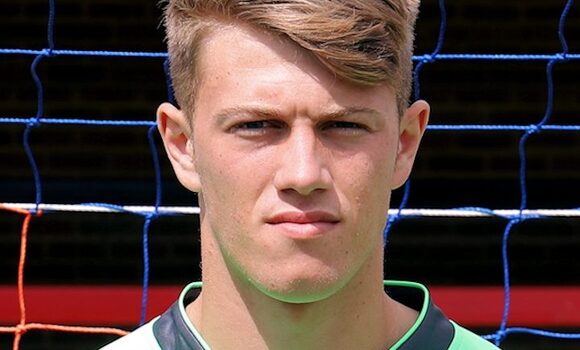 League leaders Farnborough cemented their position at the top of the Central Division with a comfortable victory at Holloways Park. The highly experienced visitors - many of their team ex professionals - were too good for their young hosts though Beaconsfield never gave up on their "play football" philosophy.

The Yellows took control from the first whistle and their dominance was rewarded in the 11th minute when Josh Huggins rose unchallenged to nod home a well taken free kick.

They should have had goal No.2 on 18 minutes when an effort by Dennis Oli was hooked off the line by Josh Gibbens (though to this observer it looked like it had crossed the line!). Oli didn't have to wait much longer to get on the score sheet as on 24 minutes and with the aid of the crossbar he managed to bundle the ball home.

Beaconsfield had to little to show for their first half efforts but put on a much better showing in the second 45. However any chance of a comeback were dashed on 58 minutes when the lively Jamie Cureton made the most of a rare spill by Jake Soutter to put The Yellows three goals to the good. Two minutes later Cureton should have scored again but Soutter made a good save, one of many the giant Australian stopper performed on the day.

Beaconsfield continued to play decent passing football and on 75 minutes Charlie Losasso saw a good shot saved by Joel Driscoll who was also equal to Ryan Haugh's follow up. Sixty seconds later Cureton hit the Beaconsfield bar but he did chalk up a second on 88 minutes - indeed but for Soutter he could have scored four!

This was always going to be a tough ask for The Rams. Farnborough are packed with experienced players and should win this division comfortably. The comments from the visiting support about Beaconsfield being a decent footballing side are nice but don't earn us any points! Recent results have showed that Beaconsfield can, on their day, beat a lot of teams so let's hope next week in the F.A. Cup is one of those days!