RAMS COME FROM BEHIND TO PROGRESS IN CUP

RAMS COME FROM BEHIND TO PROGRESS IN CUP 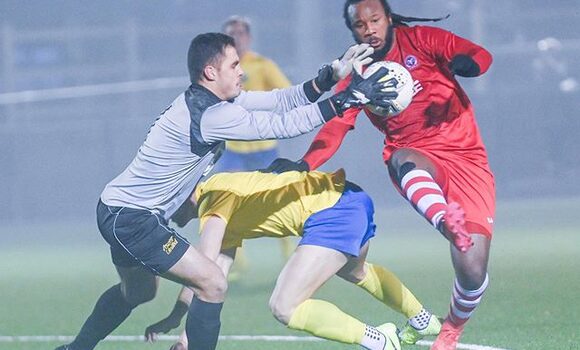 Beaconsfield progressed to the second round of the Berks & Bucks Senior Trophy but only after making life as hard as possible for themselves against a decent Ascot United side.

The Rams started brightly, Shaun Peters in particular looking lively and going close on a couple of occasions in the first 20 minutes. Charlie Losasso fired a shot just over on 22 minutes before the visitors finally made a deserved breakthrough on 27 minutes – an Ascot free kick was cleared to Brendan Matthew who fed the ball to Peters who in turn moved it on to Ade Shokunbi. His weighted pull back set up Matthews perfectly and he fired home past a helpless Sam Gray.

The lead was almost doubled on 32 minutes when a Shokunbi cross-cum-shot hit the base of the post and bounced out to safety. Such was The Rams dominance Ascot never had a shot of any note until the 45th minute.

Beaconsfield started the second period again on the front foot, Losasso bringing a fine save out of Gray on 54 minutes and Peters going close from the resulting corner. However, at one-nil, Ascot were still in the game and on 61 minutes sub Luqman Kassim forced a save out of Myles Bowman. Then on 69 minutes, after gradually coming more and more into the game, The Yellamen equalized as Ian Davis followed up his own shot, the first well saved by Bowman – all of a sudden it was game on.

The Rams responded well, Matthews rounding the keeper on 73 minutes only to see his shot bounce back off the post whilst Losasso’s follow up was spectacularly cleared off the line.

Four minutes later, though, the home side took the lead as Fabian Etienne was allowed to progress unchallenged down the left flank before firing home past Bowman. The home side’s celebrations showed how much it meant to them but if anything only served as an incentive to the visitors who, with substitute Jon-Jo Bates giving them a renewed energy, refused to capitulate.

On 86 minutes Bates seized on a pass from James Taylor and made a determined run down the right before pulling the ball back for Matthew to poke home from close distance. Then, three minutes later some fine play from Kane Guy-Seifert set up Losasso and he sent a shot under Gray to put The Rams back in front and in to the next round – get in there!

Coming on the back of the draw with Yate this was a timely confidence booster for The Rams and one, however scrappy, that will hopefully go on to finally kick-start their season.