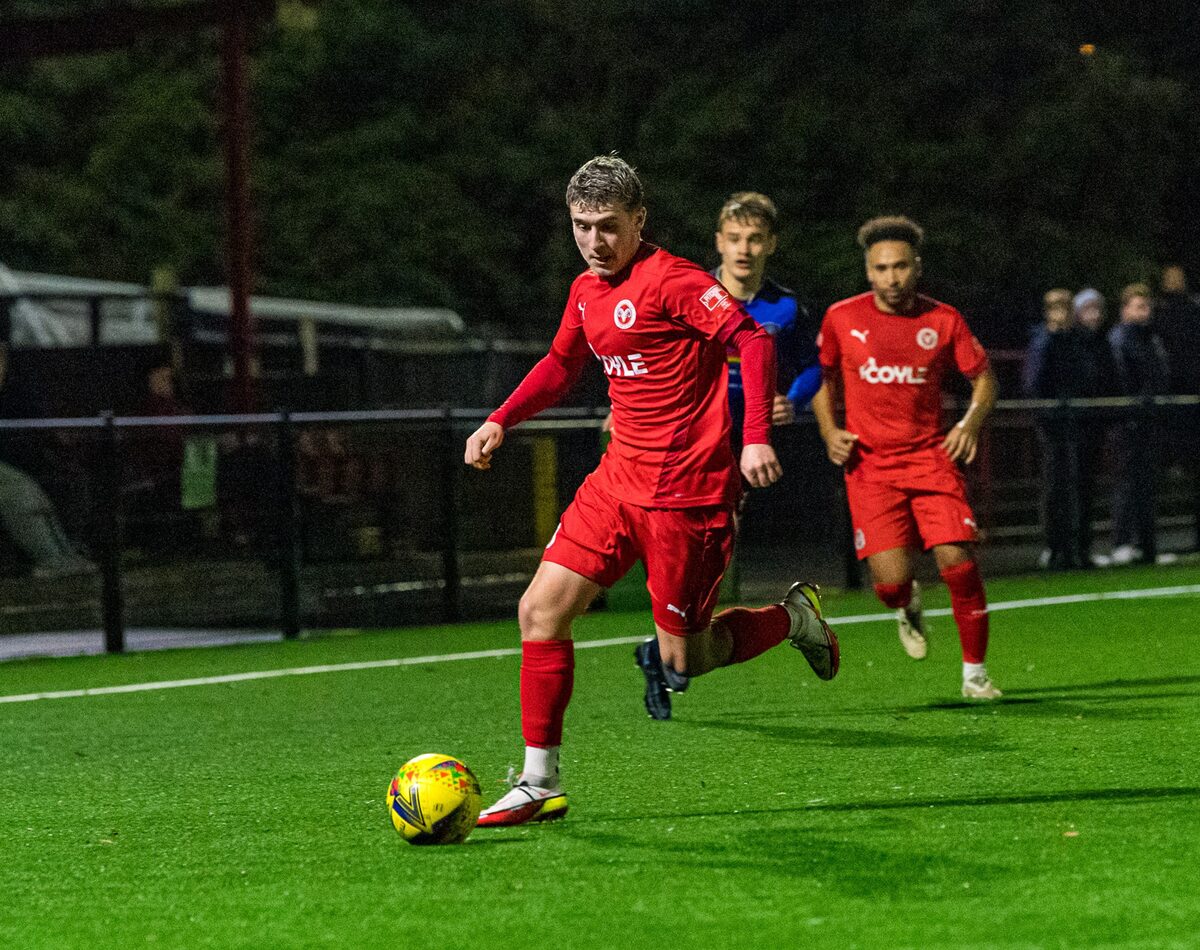 Beaconsfield Town produced one of their most fluent and dominant performances of the season on Monday evening at Holloways Park. Frustratingly a combination of poor finishing, inspired goalkeeping and familiar frailties defending set pieces saw them emerge with only a single point to show for their evenings work. Perversely whilst the visitors were worth their point it was the very least this Beaconsfield performance deserved.

Met Police arrived at Holloways Park sitting second in the table but smarting from a home defeat to Walton Casuals on 27th December still boasting one of the best defensive records in the division with victories over near rivals Farnborough and Hayes & Yeading in December.

Fair reward for his strong recent displays and consistency in the more withdrawn midfield role he has been required to take on since stepping into to the space vacated by Scott Donnelly. 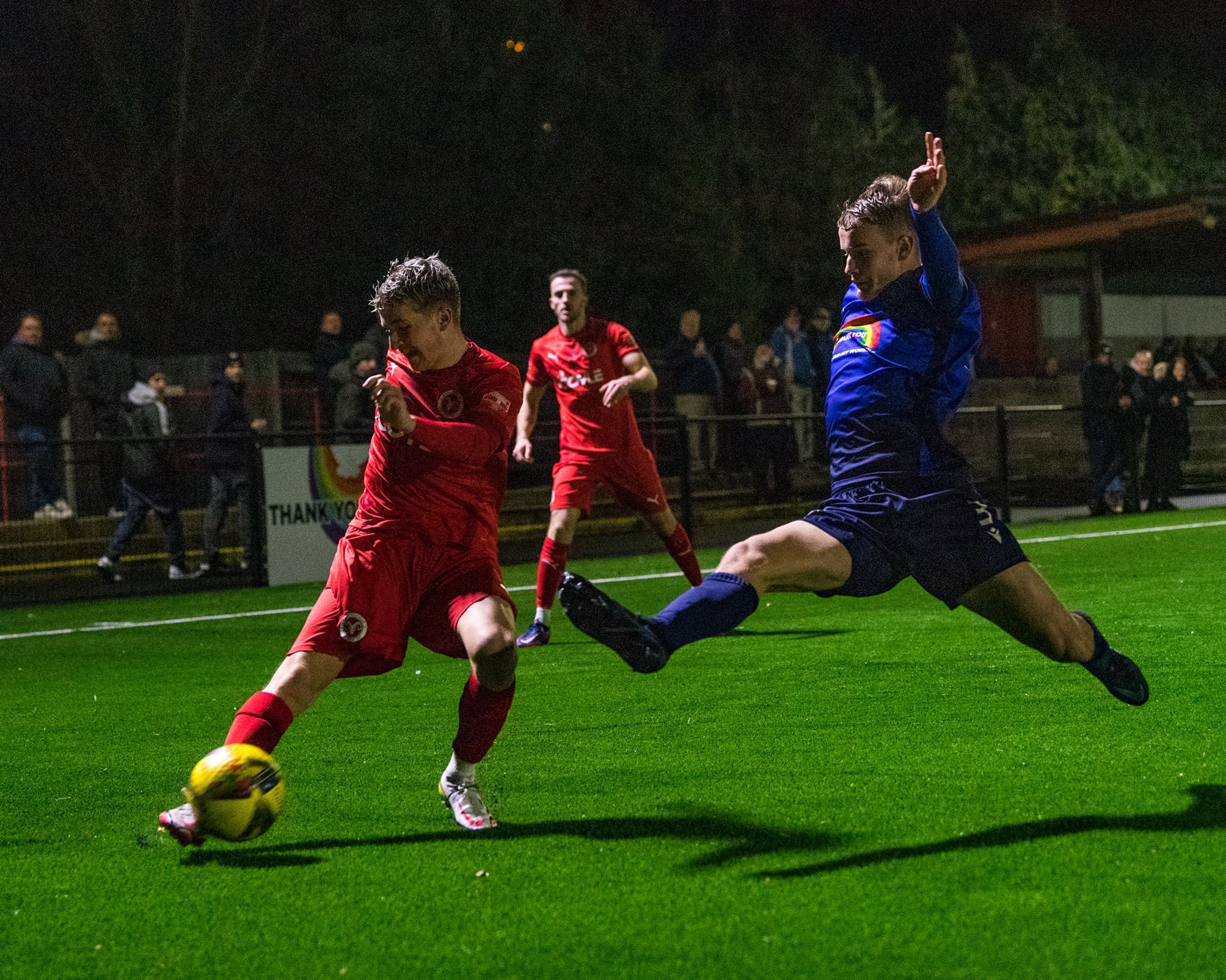 Sinclair made way for Bajram Pashaj whilst Little's space went to Dan Bradshaw, fresh from making his full debut for his parent club Eastleigh on Sunday. James Clark slotted in at right back.

The Rams began brightly and the pattern of the game was established early on. The visitors organised and well drilled, maintained a good shape defending with discipline out of possession whilst getting forward quickly and mining set pieces to create their attacking threat.

Adjectives like workmanlike, pragmatic and effective spring to mind but don’t really do them justice, they are considerably more than a kick and rush outfit. They have arrived at an efficient style and they maintain the discipline to stick to it aided by a miserly defence backed up by a very good goal keeper. A theme developing as The Rams ply their trade against the upper reaches of the table.

Todays final stumbling block came in the shape of Liam Beach a large framed no nonsense stopper with the demeanour of Neville Southall, quietly grumpy and very effective without flourishes. He was called into early action tipping over a rising Bajram Pashaj drive from 18 yards and then made himself big to smother away a close range effort from Nathan Minhas after the striker did brilliantly to control a high ball on the stretch before bringing it under control in stride and advancing on goal. The angle didn’t favour him and helped the big keeper more than the striker. At the other end any threat the visitors could muster came through the deployment of prodigious long throws or free kicks and corners which The Rams dealt with without much confidence or comfort.

It was against the run of play but not exactly a surprise when the visitors took the lead from a 25th minute corner. The delivery was half cleared falling to Bernard Tanner on the edge of the box his shot was brilliantly saved by Ryan Hall whose strong hand returned the ball to the corner taker, his pull back found Sam De ST Croix who turned in the low cross from sx yards.

The Rams continued to dominate possession and territory but could not extend Beach before the break.

Beaconsfield began the second half at a gallop. Clarke made way for Callum Webb who was into the action immediately and within Three minutes his low cross found Bajram Pashaj Eight yards out and he put Beaconsfield back on terms with a low shot into the corner.

With Matty Harriott and Dan Bradshaw driving them forward the Rams flew at the visitors Nathan Minhas met a near post Bradshaw cross but his connection was not firm enough to direct the ball on target then he again found Beach in front of hime blocking away a one on one from 12 yards but Beaconsfield were irrepressible, breaking from a rare Met attack Bradshaw carried the ball a full 60 yards out to the right wing before heading back in towards the box and rolling the ball into the path of Pashaj who rammed in a fierce shot from the edge of the box which flew into the top corner with such force that it bounced back out and was caught by the crestfallen Beach. 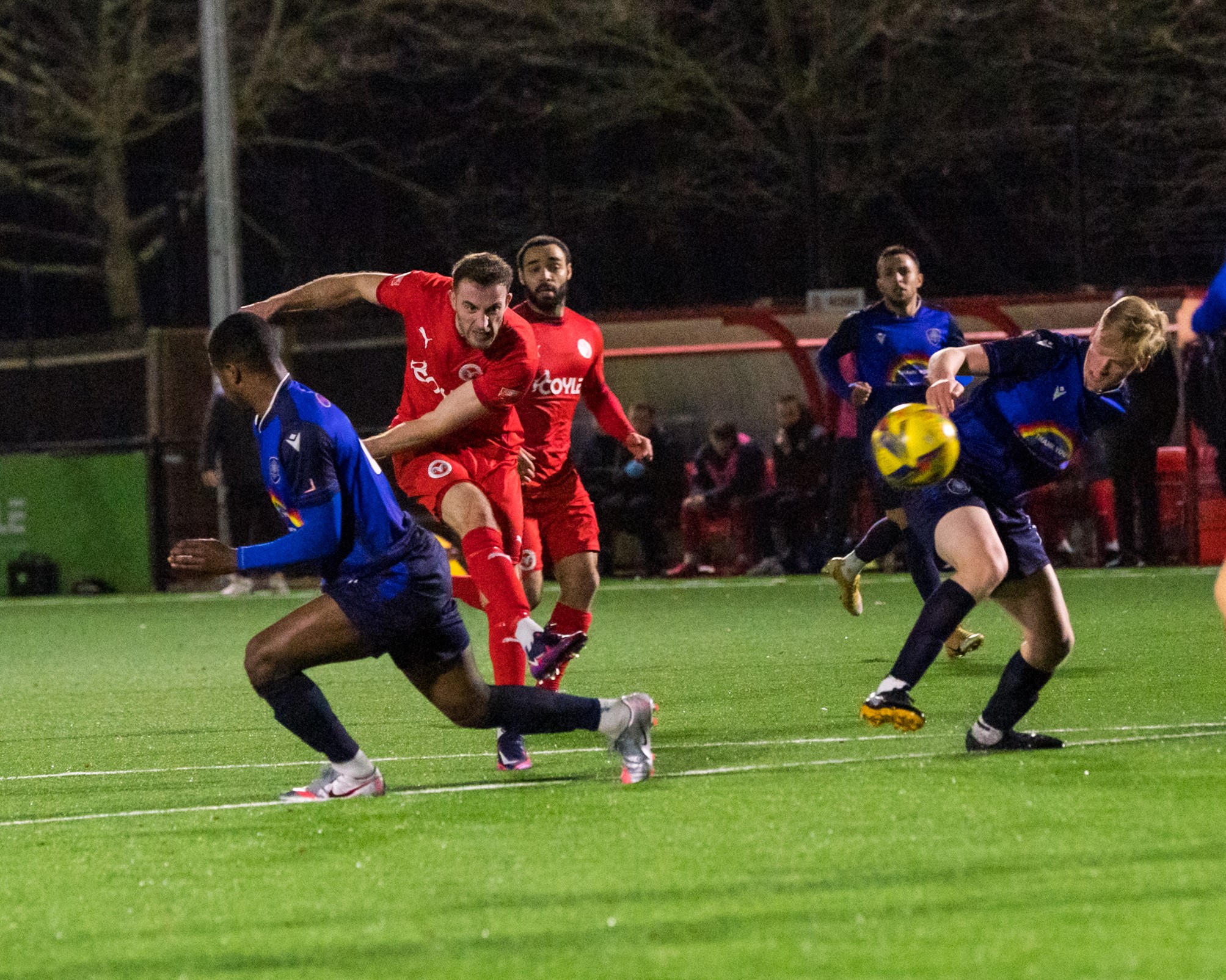 At this point with 25 minutes to go and their tails there could surely only be one winner.

The Rams continued to press. Olly McCoy burst down the left but his weighted cross was out of the comfortable reach of the onrushing Nathan Minhas who made contact on the stretch but watched as his deflection dribbled wide of the far post.

You don’t stand second in the league at Christmas without quality and resilience though and at the other end The visitors still carried a set piece threat.

Ryan Hall made the save of the night in the 68th minute turning away close range effort through a crowd with a reaction block.

From the resulting corner the visitors were level as Oliver Robinson rose to head into the corner. 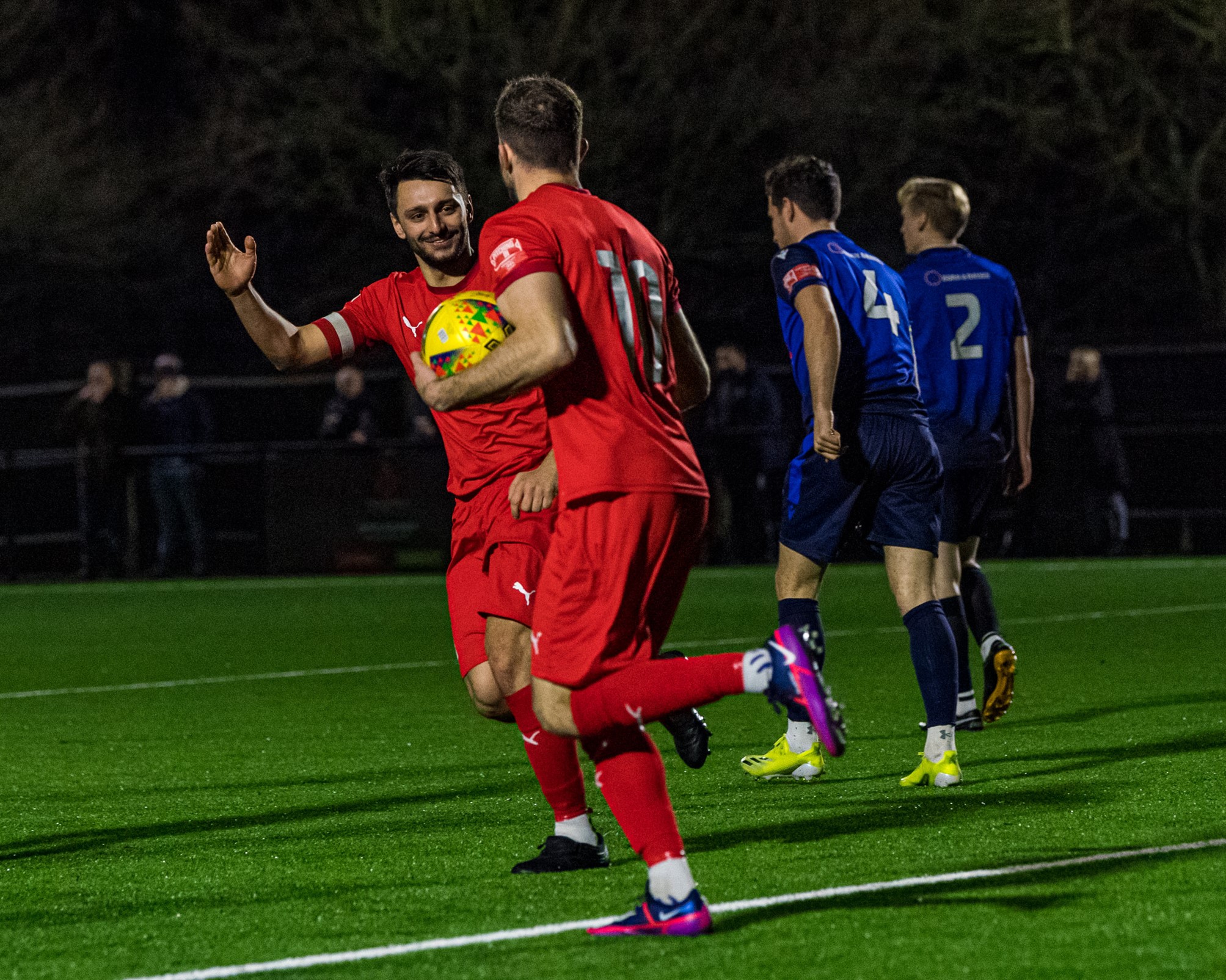 Beaconsfield continued to press and Minhas was again denied by Beach when the striker Met another McCoy cross but saw a well placed low header from 10 yards turned brilliantly wide of the post by the outstretch hand of the full length keeper.. It just wasn’t Minhas’ night

When he did beat Beach with another deft header moments later the ball fell narrowly wide. 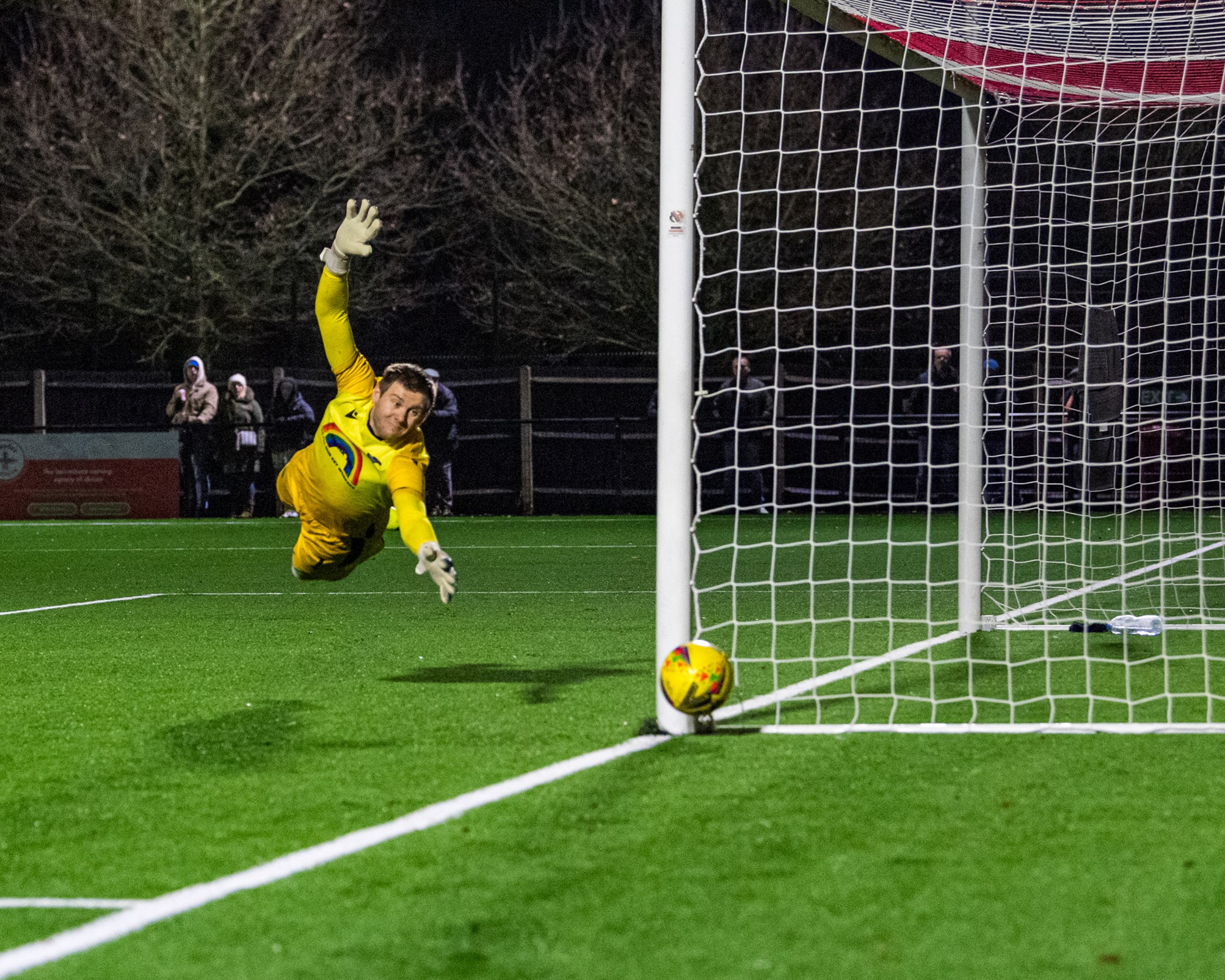 As Beaconsfield continued to press the visitors almost nicked it from a last minute corner but were saved by the referee whistling for an infringement.

If you had offered Beaconsfield a point before kick off they would have taken it but on the basis of the chances created they will probably feel it was two points dropped. With that said Met Police were more ruthless in front of goal and could easily have left with all the points after an enthralling and entertaining encounter.

Next up, The Rams entertain Kings Langley on Saturday