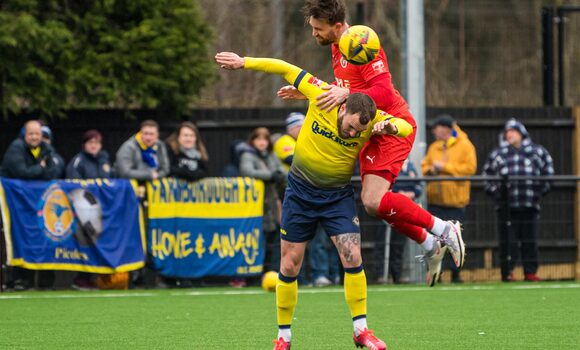 Saturday’s visit of high flying Farnborough to Holloways Park was designated as a charity benefit to raise funds for Wycombe Mind, the mental health charity for England and Wales who believe that no one should have to face a mental health problem on their own. Spectators were invited to donate to the charity in return for free entry to the Match. Bucket collections on the gate and throughout the match have so far raised £1500. 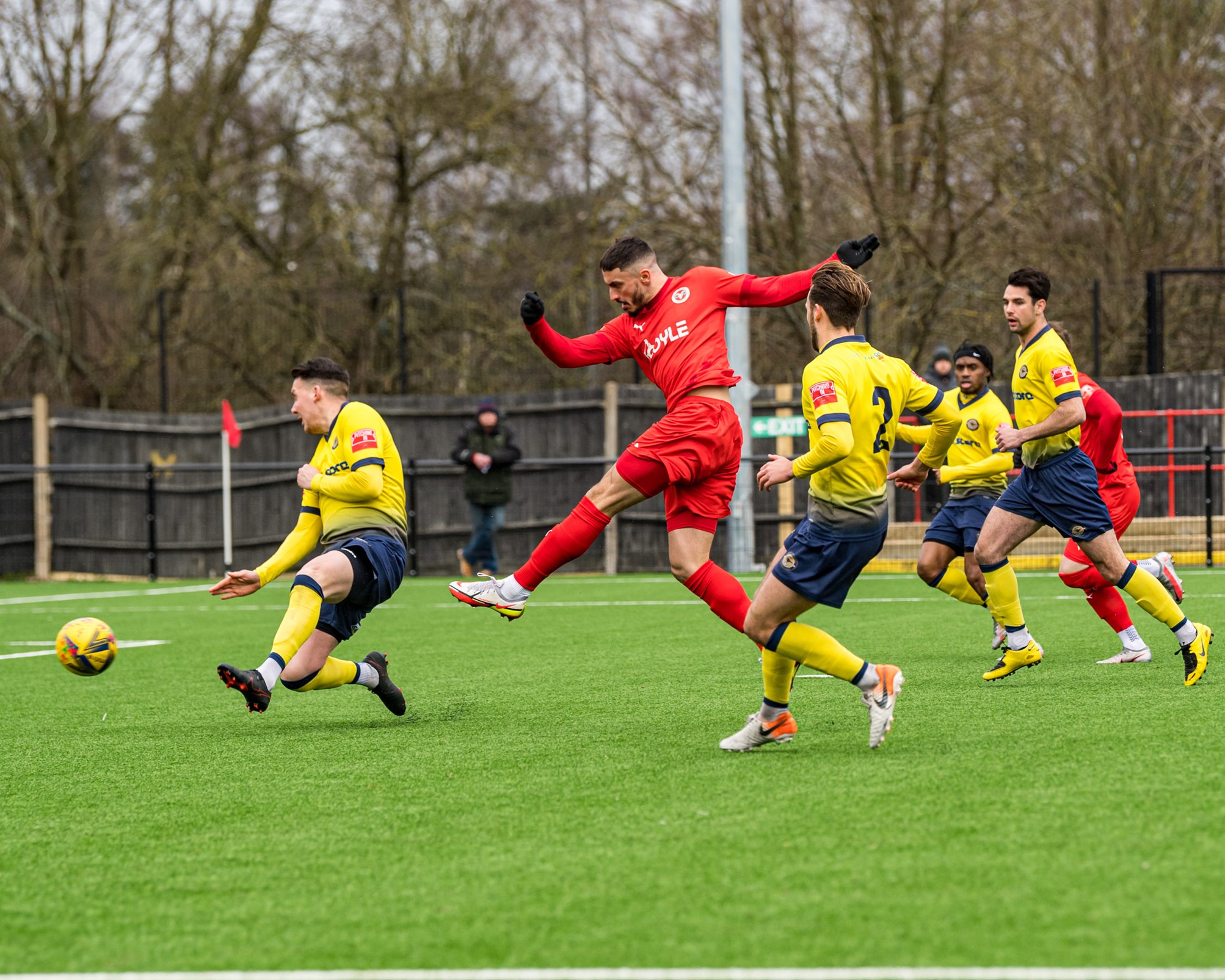 On the field the afternoon started much as last weeks hammering of Gosport Borough ended - with a goal for The Rams.

Having won the toss and elected to play with the considerable advantage of the strong breeze at their backs the visitors were stunned to concede in the second minute. Beaconsfield’s leading scorer Nathan Minhas latched on to his own knockdown, as Jack Ball misjudged the flight of the ball, to volley home from 15 yards.

Two minutes later, The Rams suffered their latest injury set back when ultra consistent left back Olly Sprague emerged from a trade mark sliding challenge with apparent damage to knee ligaments and was unable to continue.

Mr utility Toby Little shifted to left back with Matty Harriott, making a return from his own injury lay off, slotting into midfield. It was a timely return as Dan Bradshaw sustained ankle ligament damage in training and may be gone for the rest of this season.

Immediately after the substitution, Mitchell Parker almost provided a rapid response for the visitors but  struck the post with a close range effort.

Despite taking lead and creating a flurry of chances Beaconsfield could not find a way past Jack Turner in the Farnborough goal in the remaining 88 minutes as the visitors overcame the early set back to emerge with a hard fought 2-1 victory.

As the half developed Farnborough continued to play in fits and starts, struggling to come to terms with conditions. This was due in no small part to the enthusiastic pressing and cohesion of Beaconsfield, who dominated possession and set about pressing the visitors back at every opportunity.

Keeper Jack Turner had to be at his very best to keep them out, making a string of good saves the best of which saw him deny Minhas a second before brilliantly blocking Toby Little’s follow up.

On the two occasions he was beaten he was grateful to have Courtney Fearn on hand for goal-line clearances duty.

Beaconsfield were comfortably in control and it took a slice of good fortune for Farnborough to get them back in it. Wing back John Oyenuga’s cut in from the left flank and whipped in a low shot straight at Ryan Hall. As the keeper stooped to collect the ball dipped in front of him before spat off the turf and through the keeper, like a perfect yorker delivery in cricket, giving him no chance to react. 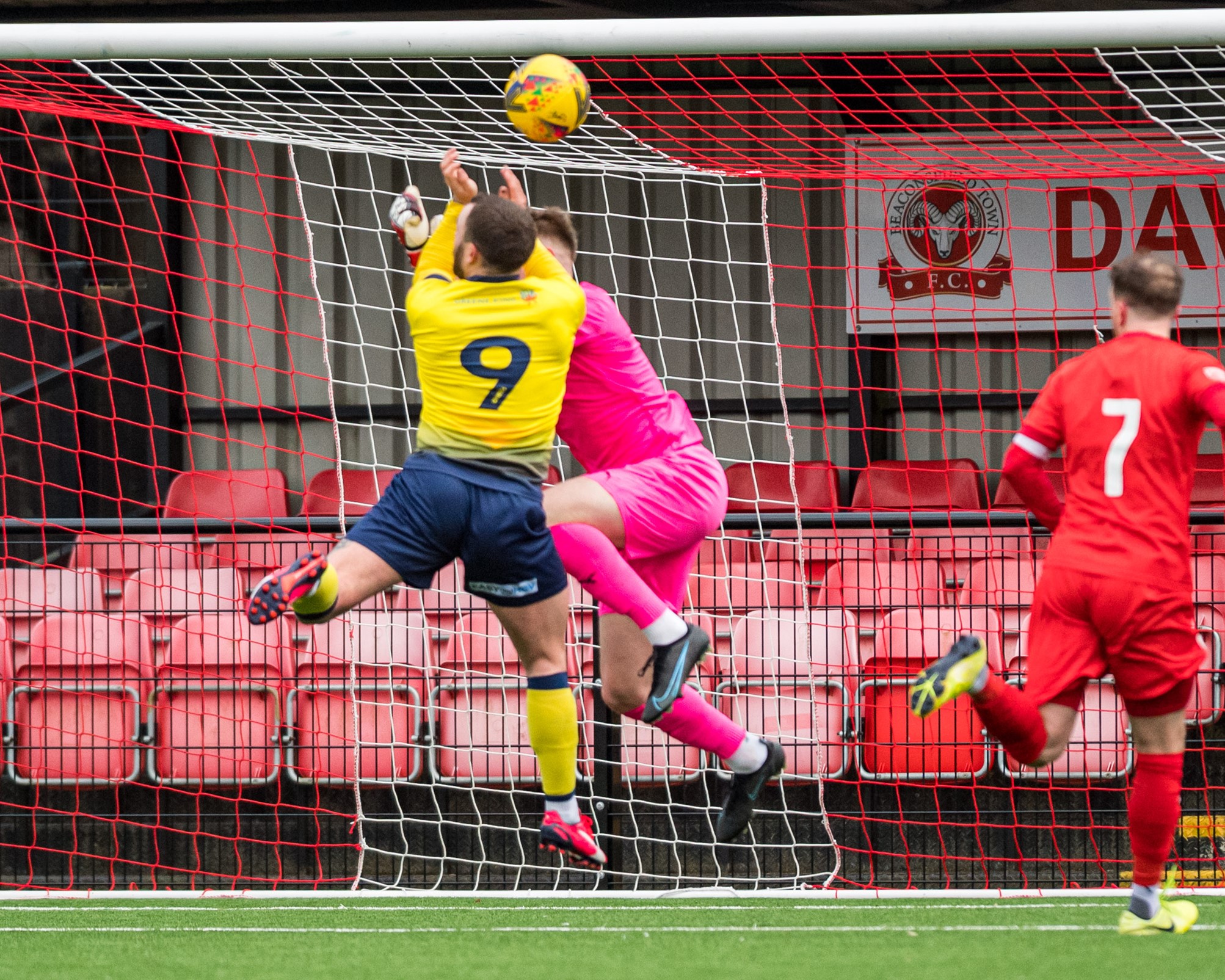 Despite the setback The Rams continued to create opportunities, with Turner again saving well from Lucas Sinclair and Olly McCoy.

Hall also had to be at his best to deny Mitchell Parker who, in first half injury time, made Beaconsfield pay the price for missed chances and firing the visitors ahead with an unstoppable, breeze assisted effort, that flew between defenders and into the top corner.

Despite the wind advantage boulstering The Rams territorial supremacy further in the second period, Farnborough were able to sit in and defend without too many alarms, drawing only one save from Turner, when Scott Donnelly’s curling effort from a short tapped free-kick was comfortably claimed on the stretch. 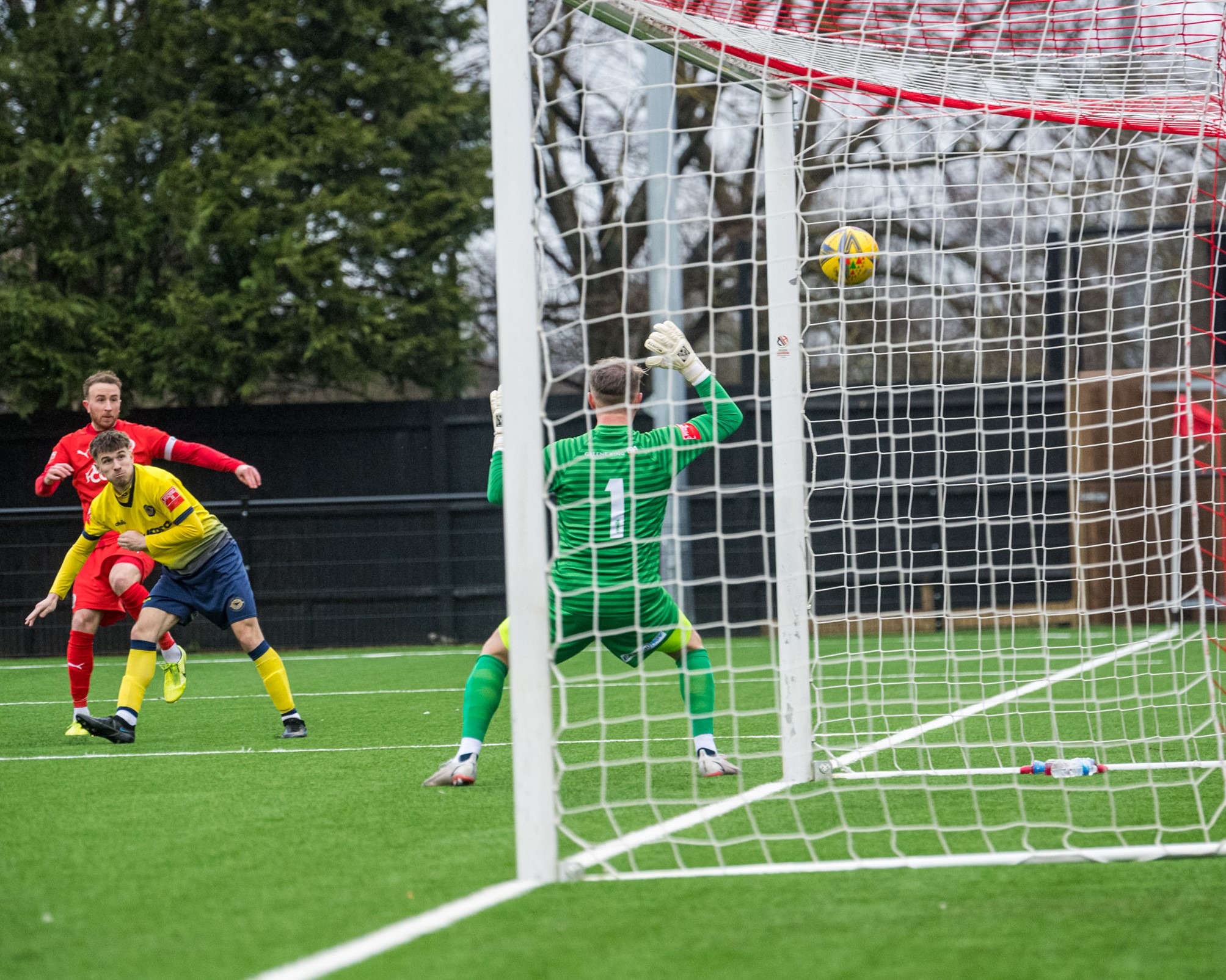 Too often The Rams overplayed in the final third, crabbed sideways across midfield and failed to make use of the wind advantage. The shots they did attempt were woefully awry.

Notable exceptions were an angled drive from Toby Little which rippled the side netting and Nathan Minhas narrowly failing to get on the end of Callum Webb’s delicious low cross along the six yard line.

For the most part though, Farnborough were pretty comfortable and created late chances to increase their lead on the break as The Rams pressed for the equaliser.

ccasion were able to introduce

Mike Neish from the bench rather than relying on the doubtful abilities of Brendan Matthew.

Turner was not called upon to reproduce his first half heroics. The home side could not break down a resolute Farnborough defence who took every opportunity to game manage their way to the final whistle.

A note for referees, not Mr Oliver Mackey in particular who, by and large controlled the game sensibly and did all he could to let the players play.

He and his colleagues though consistently fail to deal with gamesmanship - well cheating might be more accurate -  and time wasting.

As they pedantically enforce the spot of free kicks, or rolling balls. They seem happy for full backs across the league to steal 10 yards [on one occasion nearer 15 yards here] at throw ins.

Those that condescend to justify the lack of enforcement seem to believe ,

This simply serves to highlight the gulf between those who play and manage at this level and officials.

The simple fact is, especially when pinned at their own corner flag, it clearly does matter. If it didn’t and they did not feel they were gaining an advantage players wouldn’t do it.

Similarly stoppage time and time wasting. It’s hard to know when a ref stops the watch. So the appropriate level of stoppage time is hard to judge. It’s not difficult to see a player hobbling from one side of the pitch to the other to prevent a restart.

Nor should it be too difficult to deal with the six second rule for Goal-keepers. As time rolled down here Turner took a conservative fifteen seconds to clear the ball on one occasion and I’d go as far as to say six seconds was his bench mark minimum time in possession in the second half. As it stands the rule designed to speed play up, has, through abuse and lack of enforcement, actually slowed it down.

Should never have changed the Four Step rule - look it up kids.

“Ultimately it’s down to the keeper.”

In the real world, I don’t think it’s entirely on the keeper. In this case Turner but they all do it. Why wouldn’t they? Especially when holding the ball longer and longer as the half progresses is apparently condoned without penalty.

Merely shouting, “Lets play now” isn’t any kind of penalty when shouted, if you are apparently unprepared to back it up.

Not enforcing the laws of the game and backing up the mild admonishment is about as effective as whining, “don’t do that darling” as your angry terrier/toddler * [delete as appropriate] clamps hard on the posties ankle.

It demonstrably fails to address or influence the behaviour.

A foul throw award. A free-kick for time holding the ball. Or a yellow card for blatant time wasting would at least stand a chance.

Funnily enough shouting, “From there please Three”, at a full back who then advances 11 paces before putting the ball in play and doing nothing about is not refereeing, it’s spectating.

Not the greatest week on the field but the money raised and the exposure the clubs teaming up with Wycombe Mind has given to our collective approach to mental health within the game and the wider community really does transcend sport. 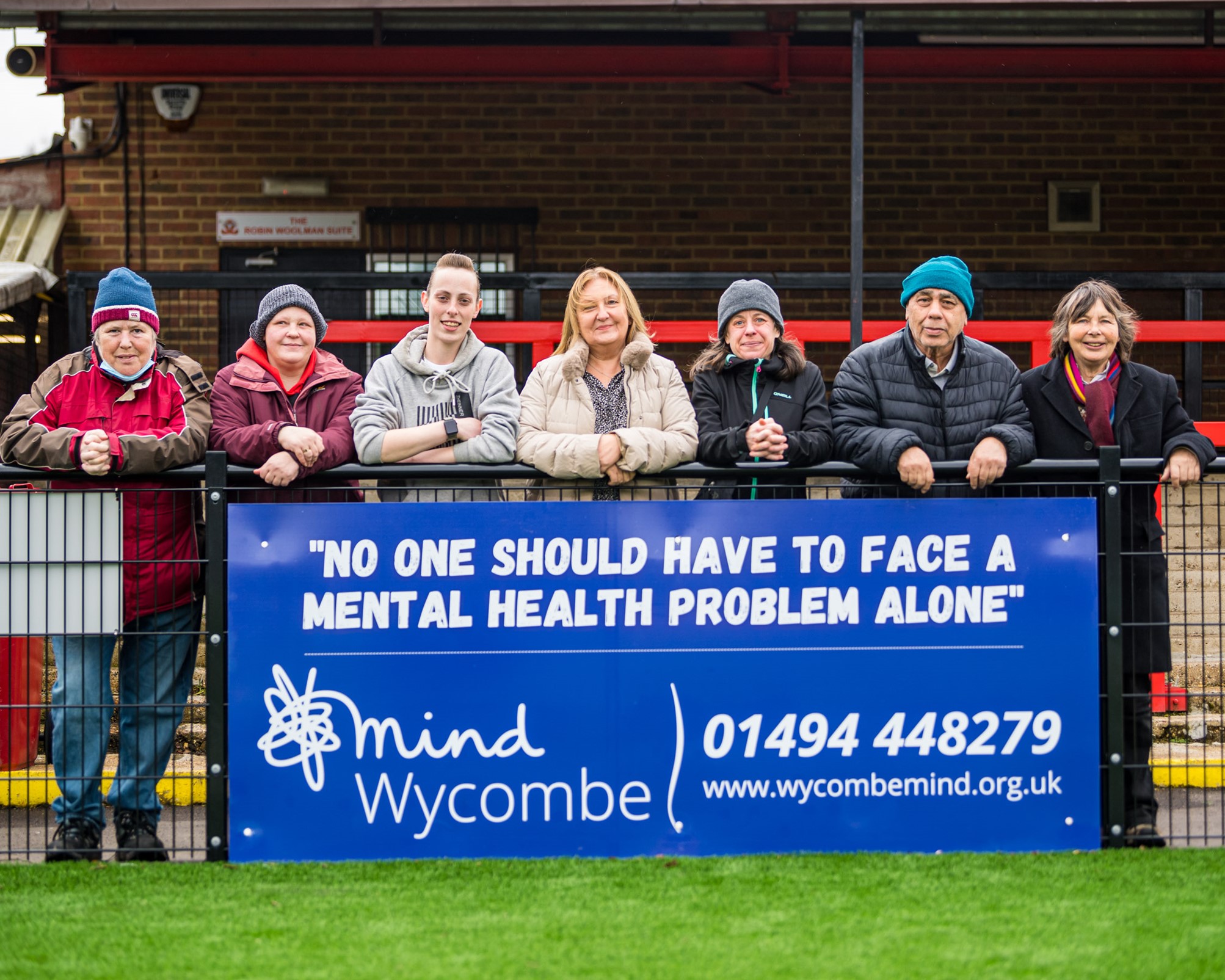 If you couldn’t get to the game fear not. You can still donate to the charity, visit www.wycombemind.org.uk for detals.

Onwards and upwards. The Rams now enjoy a 13 day break before returning to action with a visit to Swindon Supermarine on Saturday 19th.