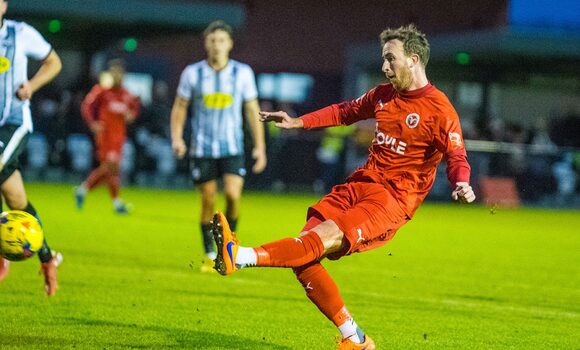 Wimborne’s former home often proved a tricky venue for The Rams in the past. The slope, the quirky surroundings and the warm welcome always made for a memorable trip and a good atmosphere, if not always a result to match.

Their new home, like many a new build, is an altogether more modern set up. The newness and the current lack of individuality, that will surely accrue over time, provides for a slightly antiseptic, generic and rather unremarkable matchday experience. The pasties are decent though! 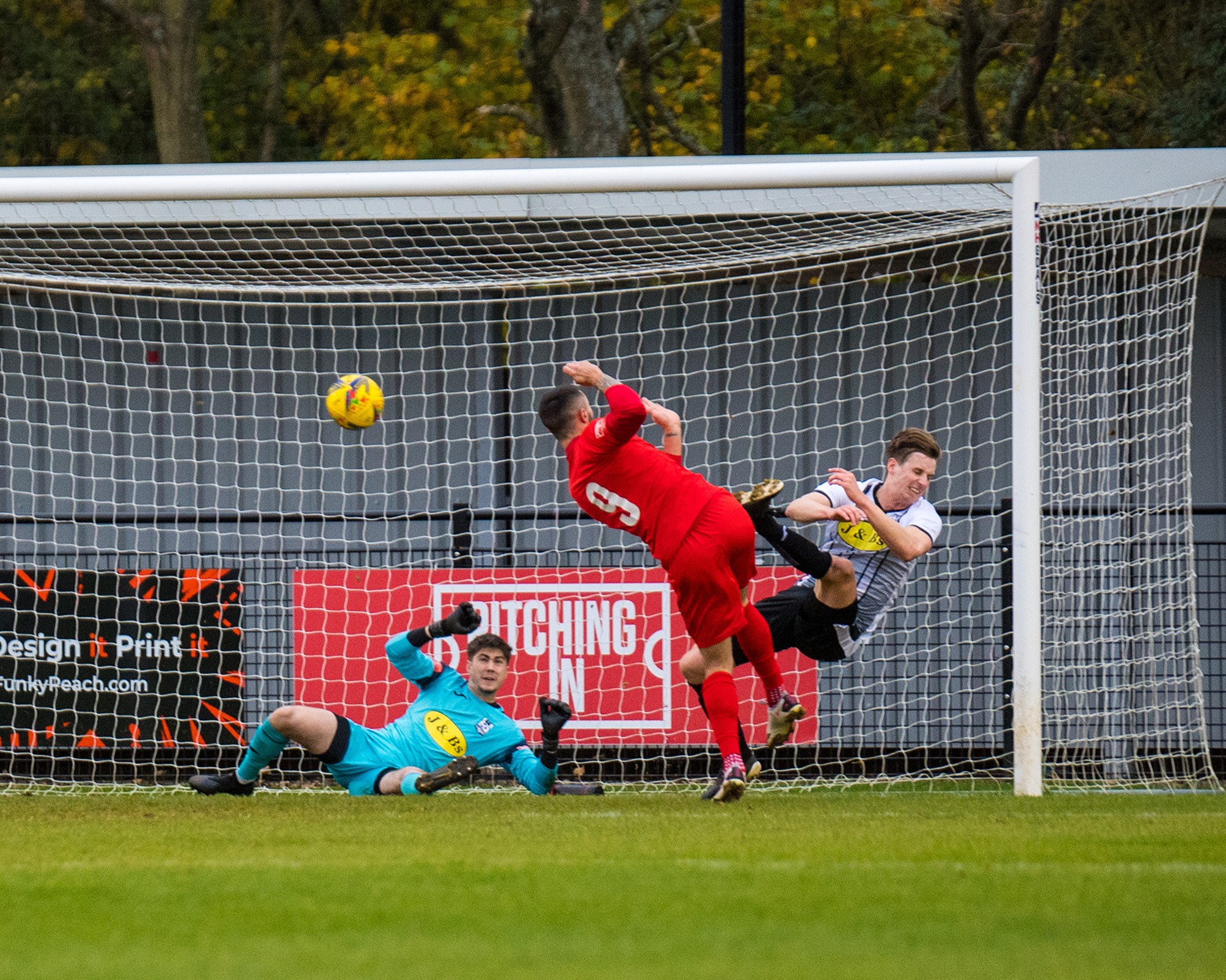 The Magpies are obviously struggling with settling in at their new home as they are yet to register a league win since picking up the keys.

The new surroundings certainly proved much more to the visitors liking on Saturday as they ran out comfortable winners after their hosts lost their discipline and ultimately the game despite holding Beaconsfield at bay for 68 minutes.

The Rams began well, Olly McCoy had his first of three brushes with the woodwork after only three minutes, picking up Nathan Minhas’s pass, stepping inside his fullback and shaping a low drive off the base of the far post with debutant keeper Alex Cull beaten.

On 11 minutes McCoy turned provider. Back peddaling to get his head on a deep cross he fashioned a looping header which Cull acrobatically turned on to the bar. Nathan Minhas was first to the rebound and rammed in the chance from six yards.

The firm surface and damp top was proving difficult for The Rams with Matty Harriott changing footwear after a couple of slips. McCoy too had problems and missed a golden opportunity to extend the lead when with the goal at his mercy he slipped and muffed a chance to turn in a Lucas Sinclair cross at the far post. Sinclair then saw his own fizzing effort brilliantly tipped over by the home keeper.

The home side had their moments but lacked the final ball to turn their attacks into anything particularly troubling for Alex Tokarczyk and his back four. Dan Strugnell guided a header wide and a couple of set pieces were well defended. 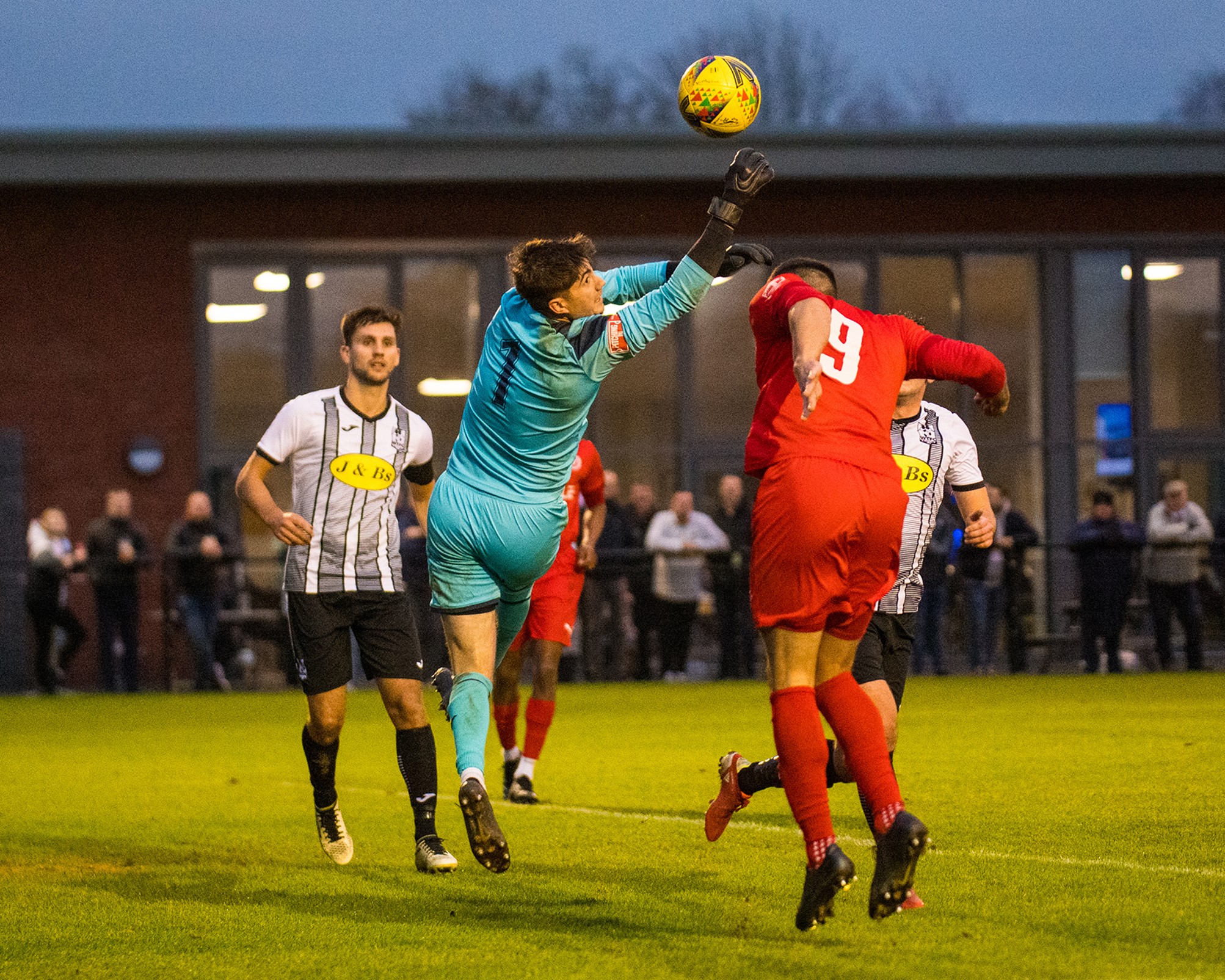 As has often been the way this season, following a spell of utter dominance, The Rams nodded off on 29 minutes and allowed The Magpies to play through them. Suddenly it was 1-1

Jez Bedford, probably the home sides outstanding player, combined with Harry Morgan in the right back channel, As The Rams stood off Morgans close control made space for Lewis Beale who powered a low shot into the corner. 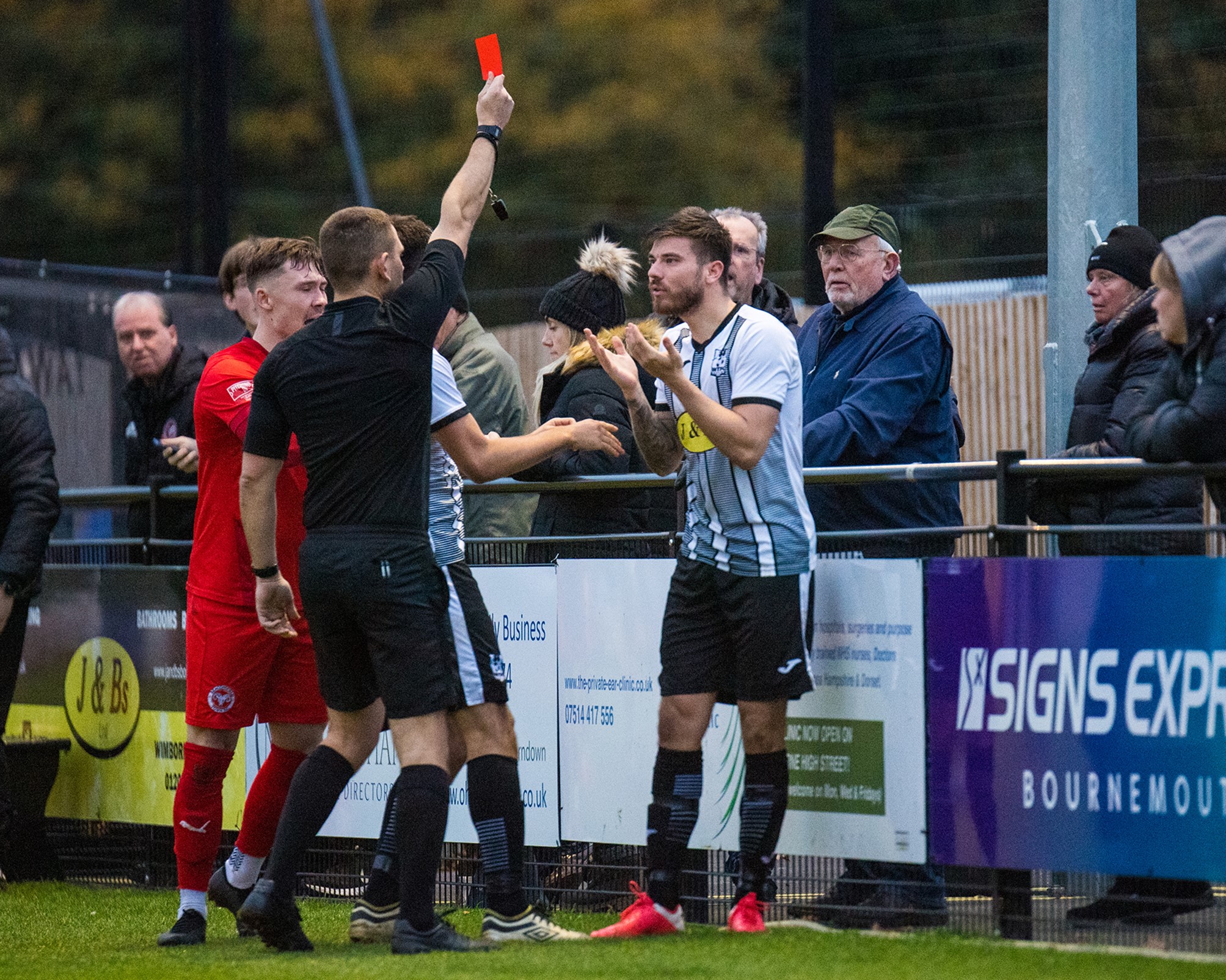 At which point it was an entirely different game. Encouraged by the goal the home side got the bit between their teeth and set about taking charge, without creating much beyond pressure. Billy Maybury had the home fans on their feet but found the rock that is Jordan AJ Ajanlekoko at the end of a promising dribble.

The second half exploded into life. Nathan Minhas slipped a shot narrowly wide after a slide rule pass from Scott Donnelly.

Culls clearing goal kick was headed back down the right back channel, Lucas Sinclair challenged Callum Chugg and arrived a hair late. A freekick was given but Chugg took exception to the wingers attention and in the resulting melee threw a punch in full view of Mr Ablitt who had no hesitation in issuing his first red card for violent conduct.

Wimborne made a spirited response and tried to press without really troubling the visiting back four. Beaconsfield gradually began to dominate possession and control, moving the ball well and stretching The Magpies who to their credit bent but did not break. When they did allow a sight of goal the admirable Cull was on hand to perform routine heroics. The young keeper did superbly to turn a Matty Harriott drive onto the frame of the goal before the Rebound fell to Olly McCoy and reared up on the edge of the box. McCoys’s did his best to tame the bounce but saw his volley come crashing back off the bar.

The dam finally broke in the 69th minute when Mr. Ablitt adjudged that Tom Bragg’s flying block of a goalbound Matty Harriott shot came as the result of a handball. All of Wimborne remained convinced that chest, shoulder or face were involved but Mr Ablitt was again well positioned, clearly certain and made the decision without hesitation.

Bragg was dismissed to join Chugg in the early bath and after much protestation and general pointless haraunging of the referee. Scott Donnelly ignored Cull’s Jerzy Dudek antics on his line and stroked home the penalty. 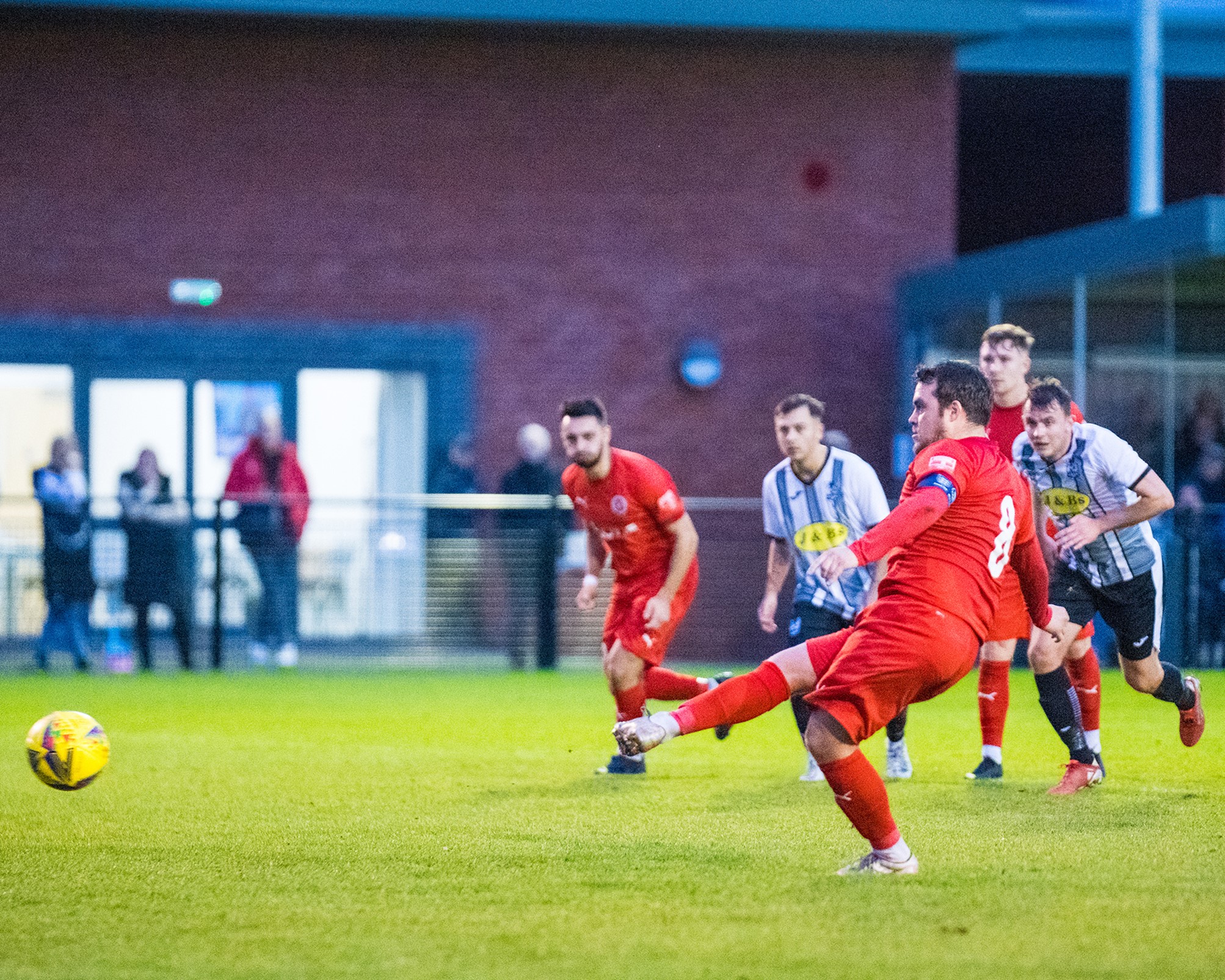 With the result now not in doubt The Rams set about their task and dominated possession, moving the ball with pace and composure. 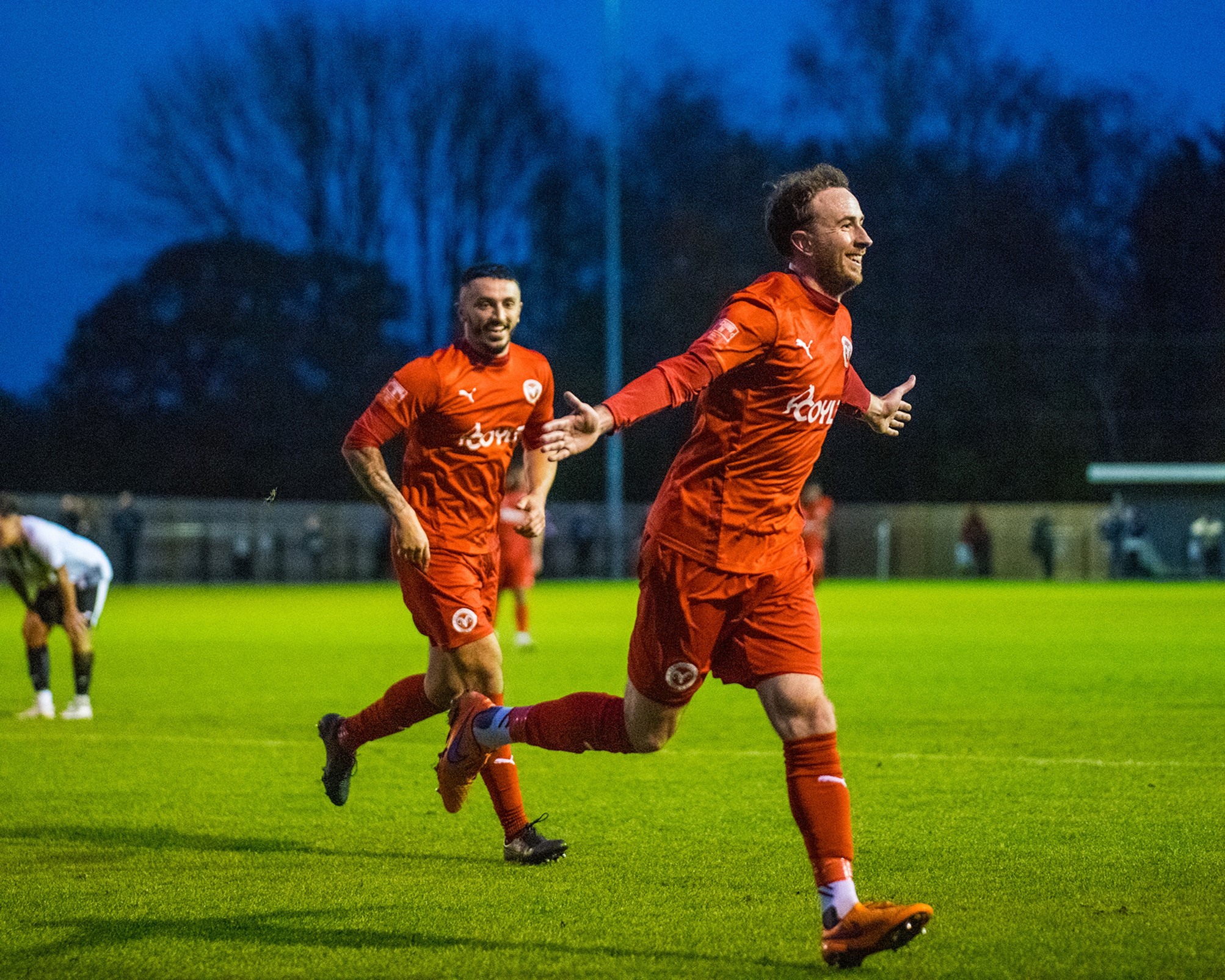 Cull continued to deny them but eventually the pressure had to tell and when Toby Little stowed into the area, sold a dummy to sit down two defenders before crashing his left footed effort in off the post, it was no more than The Rams deserved.

A good three points for The Rams on the road.

Next up our Christmas toy collection fixture at home to local rivals Chesham United.