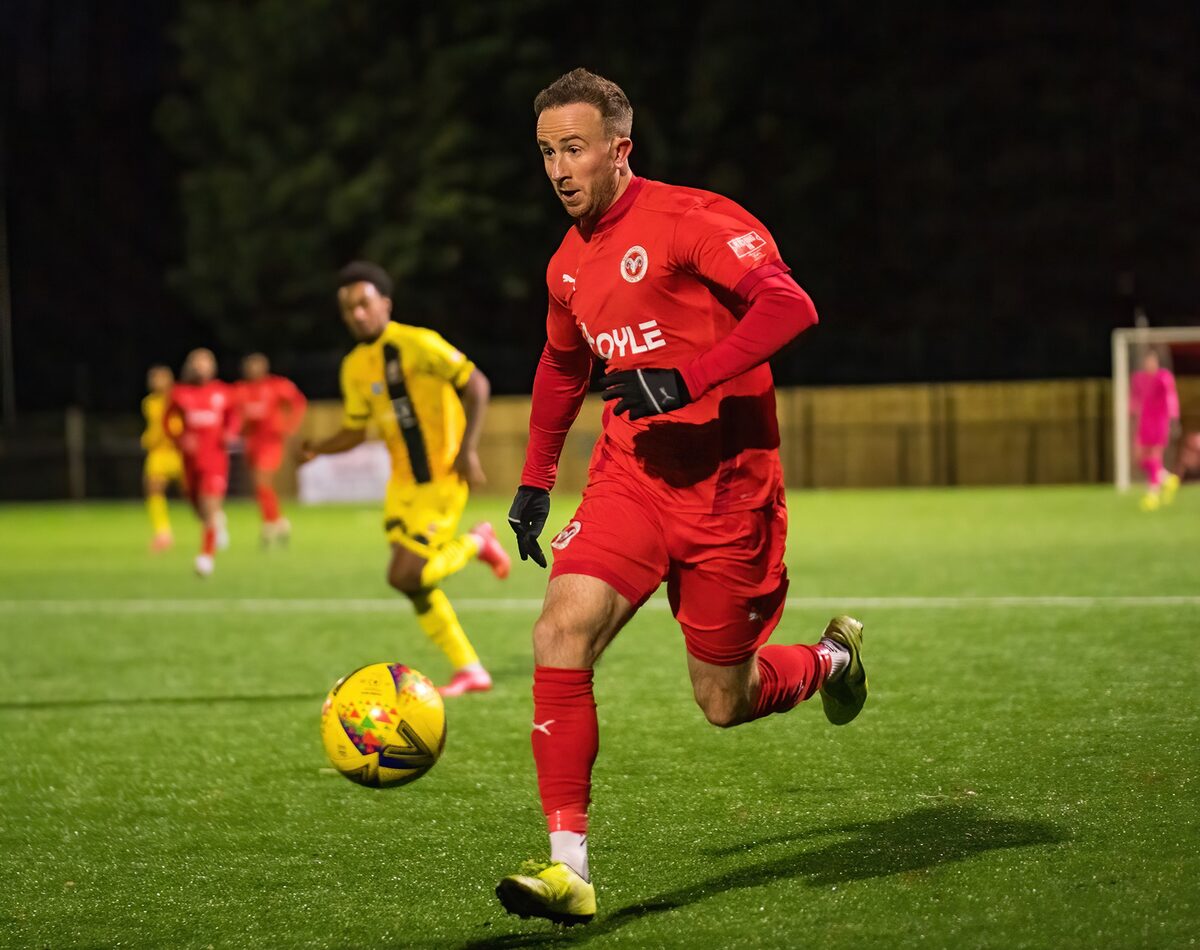 Beaconsfield Town stretched their unbeaten run to four games with their second 2-2 draw against neighbours Chesham United in just over a month. As at the Meadow last month, The Generals came from behind to earn a share of the spoils but they didn’t need 12 minutes of stoppage time to secure the point this time.

In truth on the day the winter weather was the winner as high winds from Storm Arwen battered Holloways Park, howling diagonally into the Dave Piercy end.

The first half was as much a struggle for the teams to come to terms with conditions as it was a battle with each other. Chesham played the more cohesive football such as it was whilst The Rams struggled to keep the ball on the playing surface so severe was the buffeting breeze at their backs. Unsurprisingly the weather largely put paid to any spectacle. Chances were few and far between. Zak Joseph, played in down the right channel, ran out of angle and could only hit Ayman Azaze with the visitors best effort of the first half. At the other end Sam Beasant made a good stop as Nathan Minhas just about managed to catch up with a Scott Donnelly through ball but could only help it towards the rapidly advancing keeper who made the smothering block. 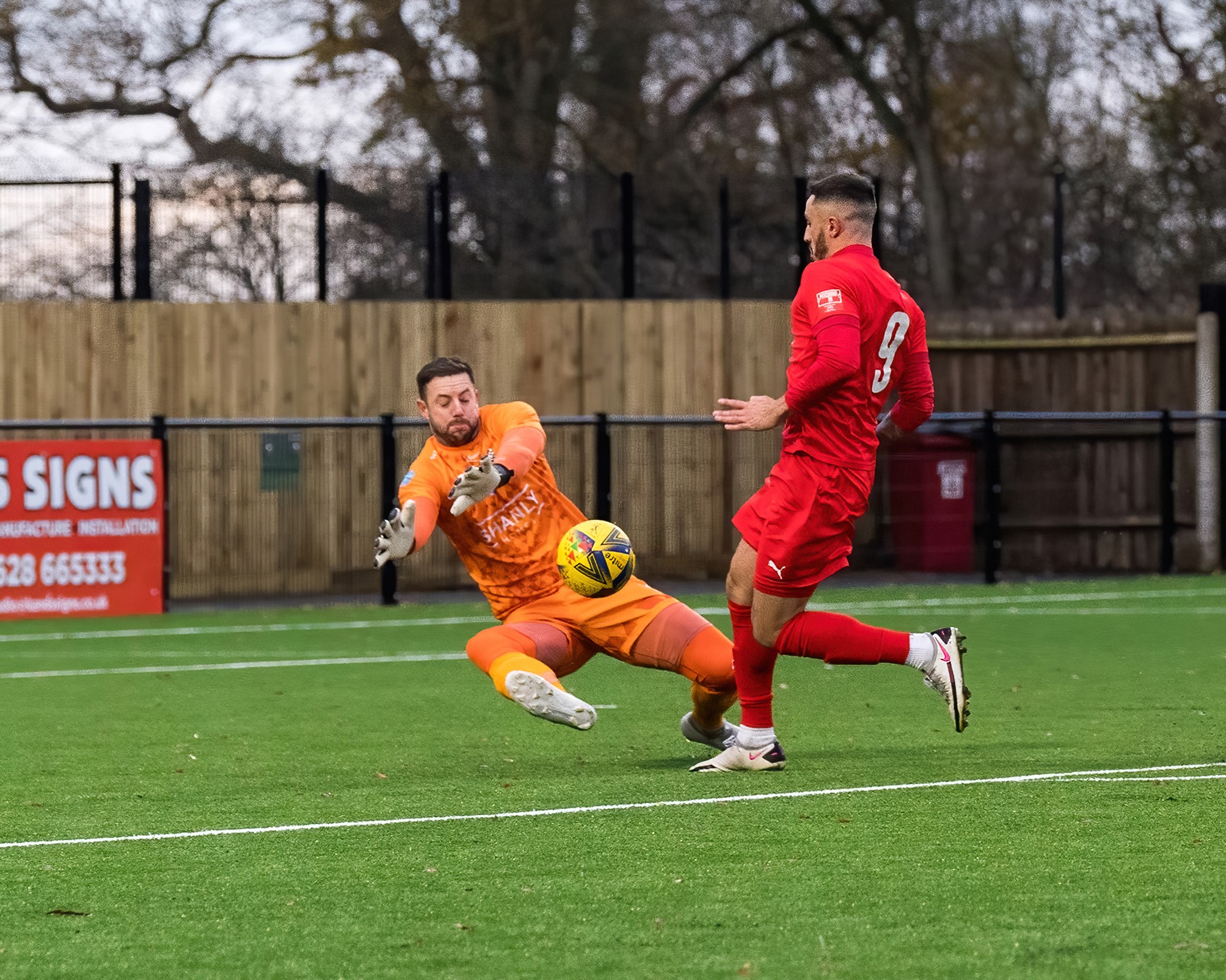 Having weathered the first period playing largely into the teeth of the wind, Chesham emerged from the tunnel confident that the elements and the game were there for the taking. Not for the first time though Beaconsfield showed that playing controlled football on the floor can actually be effective even into the wind.

So it was for the opener. Scott Donnelly and Matty Harriott combined in midfield, Lucas Sinclair and Toby Little exchanged passes to create space for Little to fashion a low cross which found Sinclair in the box and his lay off was steered home from 10 yards by Nathan Minhas to give The Rams a 48th Minute lead. 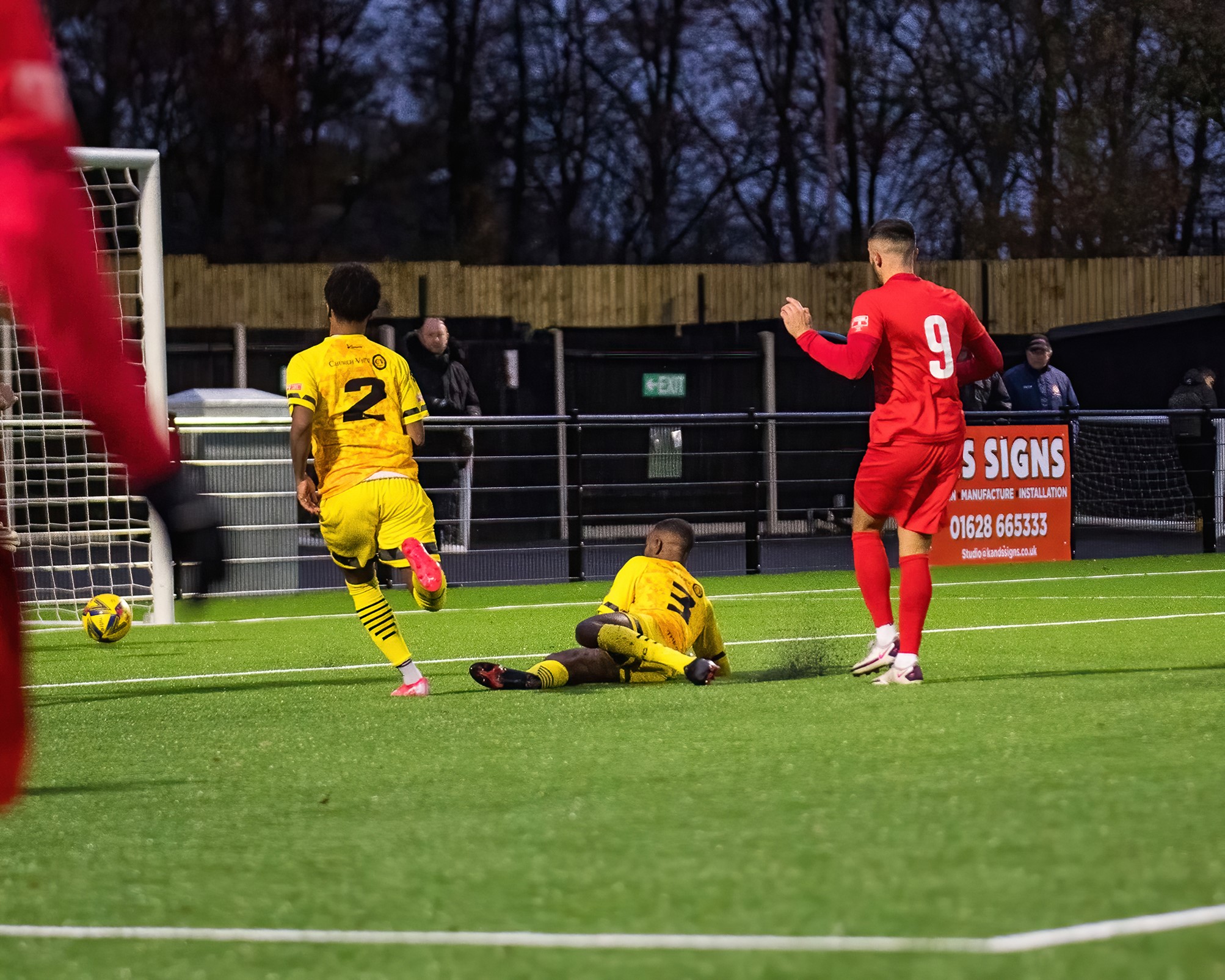 It was quickly apparent that the first half ground work seemed to have prepared both teams for the changed circumstances of the second. Chesham made more effective use of the breeze whilst The Rams were more compact and cohesive in possession. We still arent talking a feast of football here but it was at least more recognisable as a reasonable contest, having resembled a lottery in the first period.

Zak Joseph, busy and threatening all day, thought he had nicked a cheeky equaliser on 52 minutes but was adjudged to have nudged the ball from Azaze’s gloved grasp.

Two minutes later the visitors were level, Beaconsfield again conceding from a corner, here allowing Jeanmal Prosper to make the run across the near post to meet an out-swinging corner which Matty Harriott valiantly attempted to head clear. Propsper’s effort had enough pace that the midfielders effort simply redirected the ball into the roof of his own net.

Regular Rams watchers have seen them concede virtually the same goal too often for comfort this season.

Buoyed by the equaliser and with the elements in their favour Chesham sensed that the game was there for the taking. Bradley Clayton, the outstanding Chesham player in the last meeting, thought he had the visitors noses in front in the 63rd minute, firing home from close range but the strike was chalked off for offside.

Five minutes later The Rams were ahead again. Another patient period of possession found Toby Little on the left with space to shape an exquisite low cross. Shaping the pass on the wind the ball perfectly bisected keeper and retreating defenders just enough for Lucas Sinclair to nip between the centre backs and thump it home in stride. 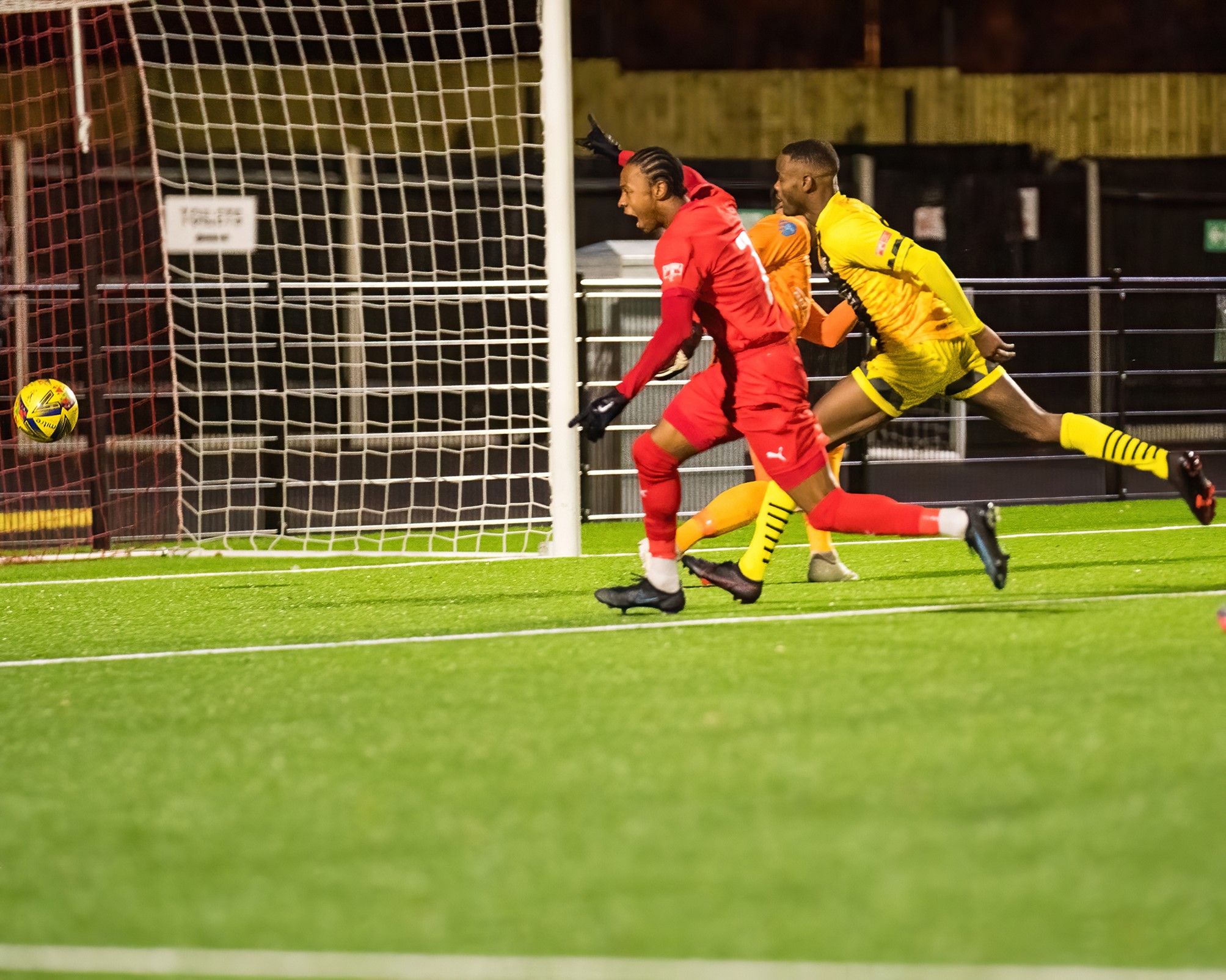 Yet again the lead lasted barely five minutes when Zak Josephs persistence and willingness to chase a lost cause was rewarded with a goal that Ayman Azaze will probably wake up in a cold sweat screaming about.

Unaccountably, a forward lump which initially seemed destined for the big keeper seemed to actually hold up on the surface. As Azaze realised he would need to leave his area he still judged that he could play a pass to supporting full back Olly Sprague. Joseph though was quicker over the ground than the keeper anticipated and the strikers lunging block, which could have gone anywhere, rerouted the ball into the net.

Again Chesham were buoyed and poured forward to try and secure all three points.

Azaze and his back four stood firm though. The big keeper, showing no hang over from the equaliser, recovering to command his box and producing an excellent full length save to keep out a low Karl Oliyide effort.

Meanwhile The Rams too had chances to clinch it.

Olly McCoy and Matty Harriott were thwarted by a succession of heroic last ditch blocks after another left wing cross from Little.

Then with five minutes remaining Sinclair picked out McCoy beyond the far post. With the angle against him, the wide man saw his low cross shot slip agonisingly wide of Beasant’s far post.

In the final analysis both sides had chances to win it but neither really deserved to lose. Considering the appalling conditions both teams deserve credit for the entertainment they managed to deliver.

Next up for the Rams entertain near neighbours Slough Town for their Berks and Bucks cup tie on Monday evening.