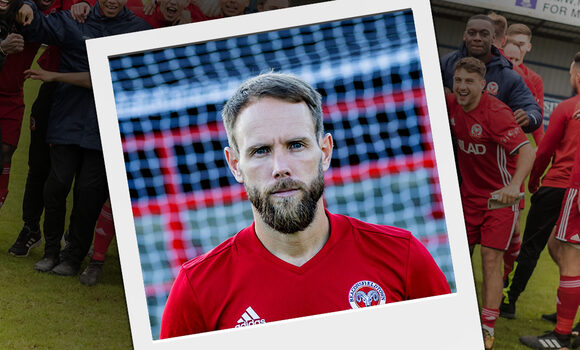 Having scooped the Supporters Player of the Year Award to go along with his EvoStik league South, East, WINNNERS Medal, Scott Cousins has decided to hang up his playing boots. The hugely popular defender made his debut for the club in the first official Beaconsfield Town game, away at Aylesbury United on August 12th 2017 and went on to play 46 games. He also scored four goals, his last coming appropriately enough in his final outing in the Champions v Champions match away at Taunton Town.

Highly respected and hugely influential in the dressing room, always ready to offer encouragement to his team mates, Scott joined The Rams from Hendon for whom he played over 200 games and for whom he was, unsurprisingly, a cub legend. He began his career in the Youth and Reserve set up at Chelsea and is the record appearance holder for the England Six-A-Side team.

Manager Gary Meakin said “It is going to be a huge loss for us as he not only played a large amount of our games last season but was a great character and leader in the dressing room. Though I am hoping he will join the coaching staff at some point, he also has ambitions to be a manager himself, so if there are clubs out there looking for one then he would be fantastic. He also has The Knowledge to complete and is in the final stages and having experienced my dad doing it then I understand how intense that will be for the next few months. He is a close friend of mine and I asked him to come out of retirement to play and neither of us knew exactly how it would go but I think in winning the league and collecting the supporters player of the season, it went ok! So he leaves on a high and will always be welcome back to Beaconsfield Town FC.

The Club would like to thank Scott for all his efforts in our Championship winning season, he is indeed an honorary member of the Male Sheep Massive!