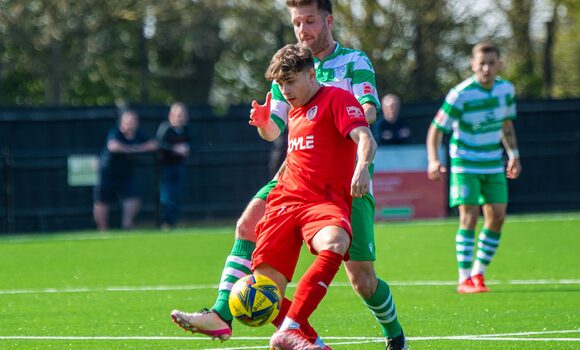 Beaconsfield Town and Merthyr Town shared seven goals in the Easter Saturday sunshine at Holloways Park but the encounter was some way short of the thriller the score line might suggest.  The visitors dominated the first half of the fixture as The Rams were a yard off the pace in the holiday sunshine.

Andrei Chiriac almost opened the scoring. Spotting keeper Jaimie Cogman off his line The Rams first Academy graduate launched an audacious effort from inside his own half and Cogman was relieved to see the ball drop just over the bar and nestle in the roof of the net.

Moments later the visitors were ahead, Kieran Evans reacting first, ghosting in at the far post as Curtis Jemmet-Hutson’s inswinging cross made its way to him through a crowd. He and the ball arrived together, just ahead of Lawson Clarke, making his full league debut in The Rams goal and Evans forced the ball home. 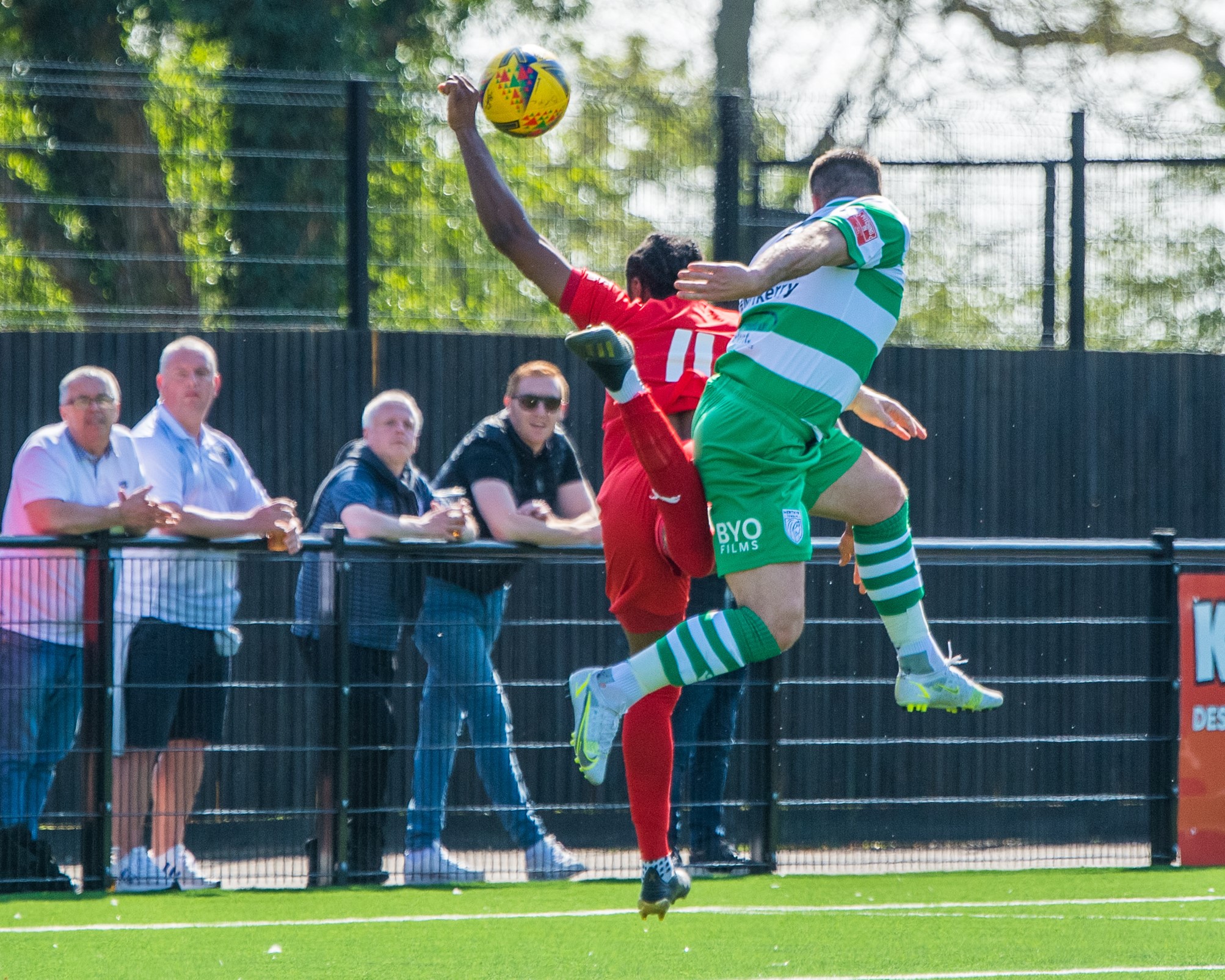 As the Rams continued to struggle to impose themselves, the visitors had strong claims for a penalty turned down. Lewis Powell’s header glanced off Jordan Aghatise‘s head and onto his outstretched arm. Mr Elson decided a corner was an appropriate compromise which was out of keeping with his general approach in a first half littered with cheap fouls and play acting, mostly from the visitors. The tactical feigned head injury to snuff out attacks a particular low light.  Presumably Elson took the view that Aghatise’s arm, whilst above his head, was in a natural position for a centre half jumping in a challenge. Most of Merthyr would probably disagree. 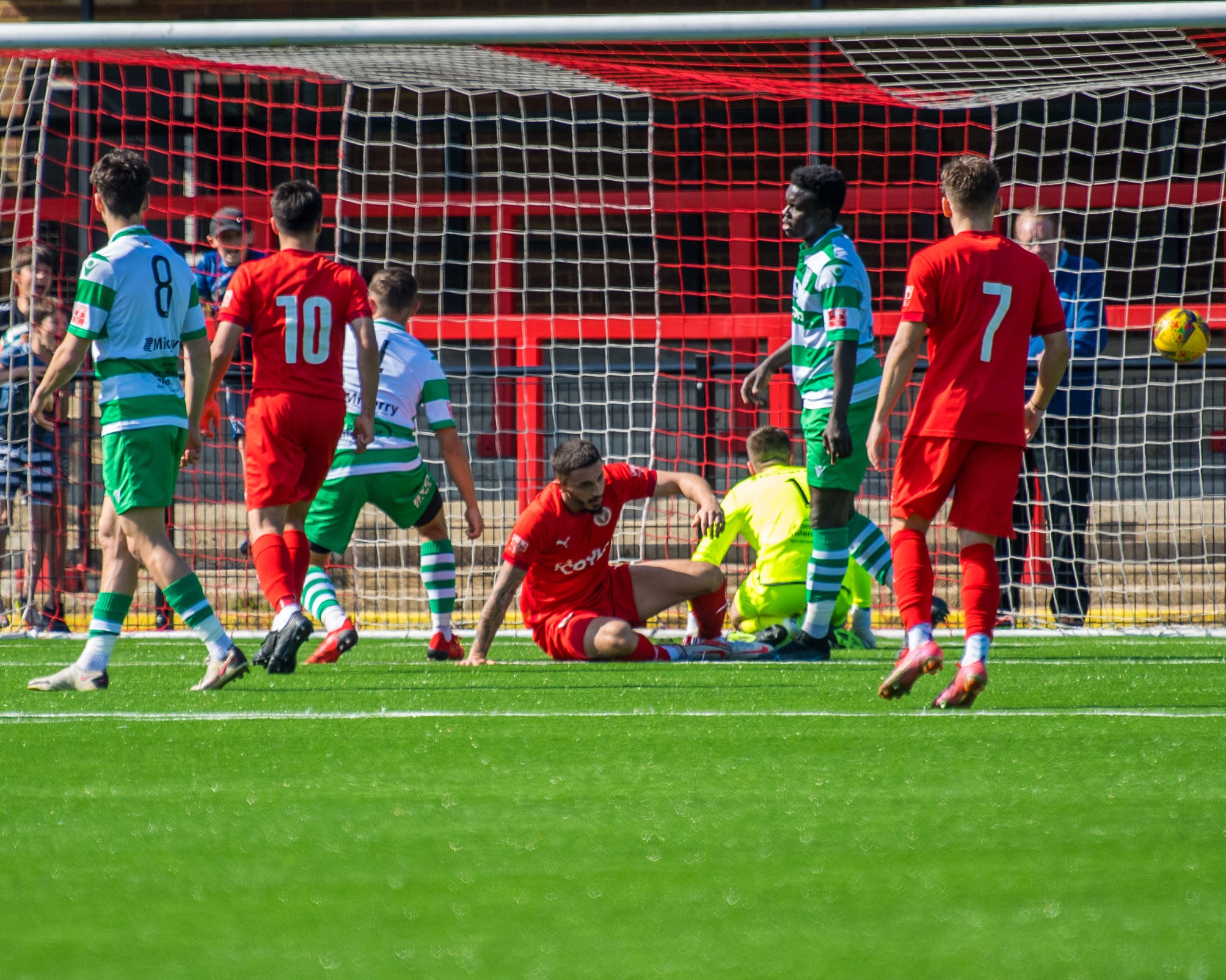 The Rams almost levelled while Merthyr were still complaining but a combination of last ditch defending and instinctive goalkeeping kept them at bay. Andrei Chiriac, played in by Aaron Minhas, shaped a goal bound effort that flicked off the toe of Matthew Harris’ last ditch lunge, the deflection carried the ball closer to the keeper who made a good low one handed save but the rebound fell to the onrushing Aaron Minhas.  He seemed to have done everything right, controlling his effort keeping it down and on target.,Sscrificing some power in the process enabling Cogman, who reacted quickly, to spring up to his right and deflect the effort over the bar.

Moments later Merthyr doubled their lead as a goal bound effort fell to Curtis Jemmet-Hutson six yards out and he curled a right footed effort past the advancing Clarke and Callum Webb scrambling to cover.

On the stroke of half time Beaconsfield were back in it after Olly McCoys persistence worked a crossing opportunity. His pull back was collected by Nathan Minhas who held off the attentions of two defenders  before turning and sliding a low effort past Cogman.

The optimism of escaping the first half with a narrow deficit despite being second best throughout carried into the early stages of the second period as The Rams started on the front foot.

Despite the early pressure and a flurry of half chances It was Merthyr who extended their lead after 55 minutes. Curtis Jemmett-Hutson driving home his second from 18 yards.

Three became four on 72 minutes after Lewis Powell slotted a low shot past Mike Niesh who came off the bench when Clarke had to leave the field with an apparent impact injury.

The Rams pulled one back after good work from Chiriac saw him drive to the bye line before pulling the ball across the face of goal where Nathan Minhas showed strength and determination to turn his effort home in the grip of Joe Woodiwiss.

If the striker can’t find the 9 shirt for Monday’s visit to Met Police I suggest Graham the kit man should ask Woodiwiss, who, having recovered from life threatening head injuries in the first half, maintained a firm hold of it the entire second half (unpunished) and  probably still has hold of it. As Mr Elson’s first half Basketball non contact style gave way to a more MMA approach.

Minhas was denied a hat trick by a plunging save from Cogman and Olly McCoy couldn’t capitalise on two chances before, as injury time ticked by, substitute Matt Harriott found half a yard of space on the edge of the box before firing a low drive into the corner. 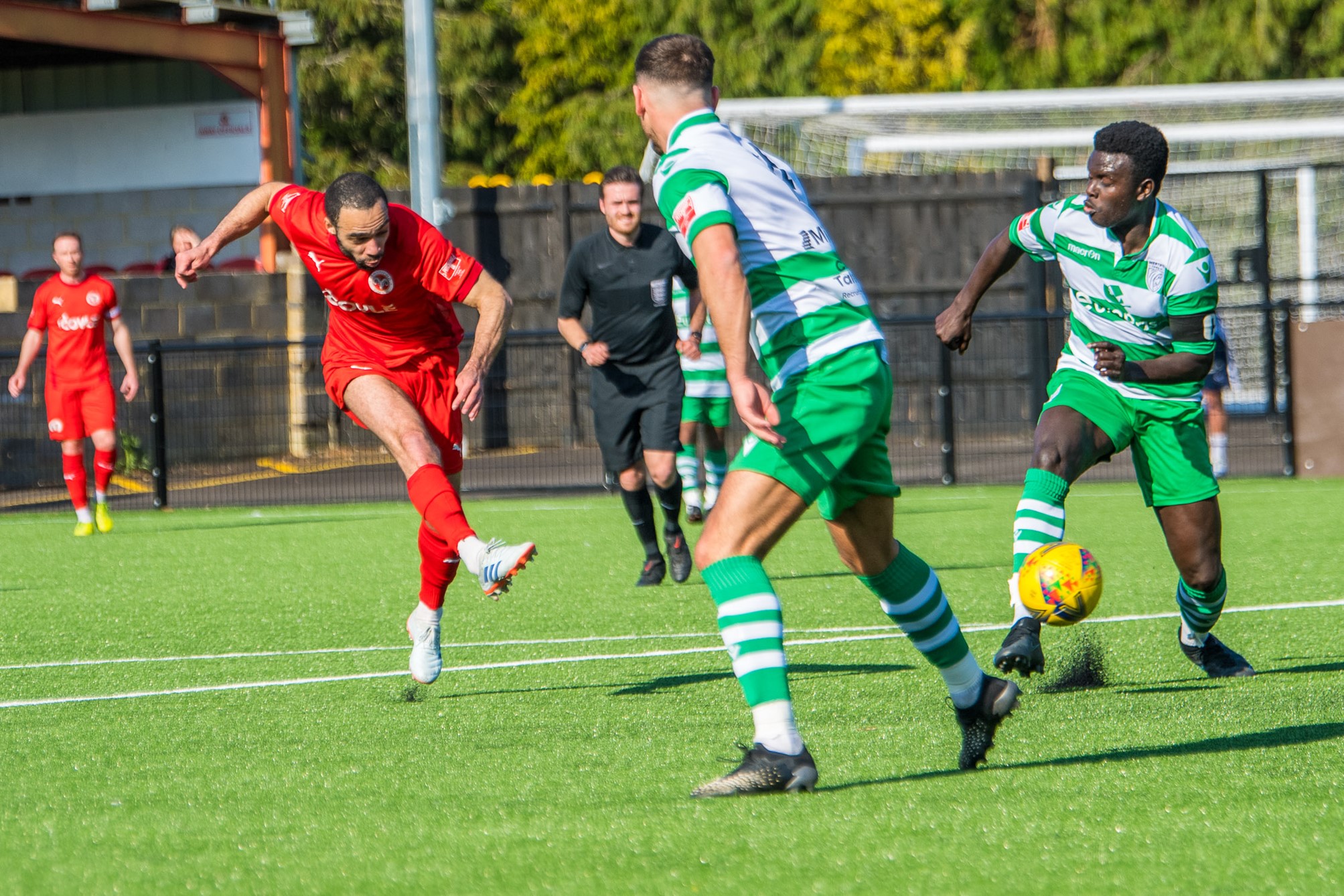 Anyone expecting a grandstand finish was again disappointed though as

Merthyr sat in and held off The Rams , often quite literally.

So, for the second time in a week The Rams scored three goals at home but failed to secure any points. It’s to be hoped they can emerge with something to show from their final two encounters beginning at play off chasing Met Police at Imber Court on Monday afternoon. 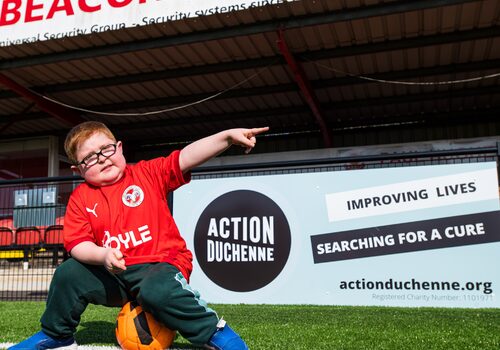