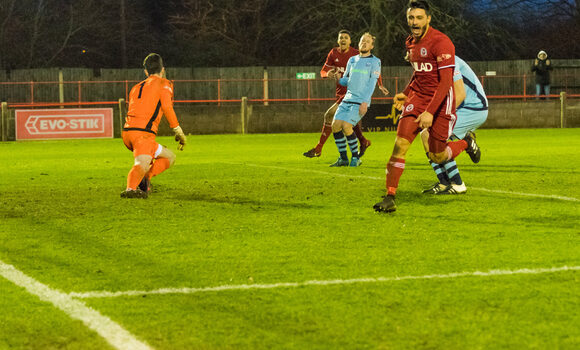 Three fine strikes by Aaron Minhas ensured that Beaconsfield Town finally saw off a determined Cambridge City side and on this performance it is easy to see why both sides are challenging near the top of the division.

Though the first half was goal-less it was still highly entertaining, both sides cancelling each other out in terms of possession. Tre Mitford had half a chance for The Rams on 19 minutes whilst Ryan Towner for the visitors put a shot just wide on 34 minutes. Possibly the best chance of an opening goal fell to Mitford on 35 minutes but his first effort was thwarted by City keeper Charlie Bannister and his follow up rolled agonizingly across the face of goal.

The second half was only six minutes old when a long clearance by Ravan Constable was misjudged by the City defence. Minhas was on it in a flash, controlled and then poked the ball past Bannister. The lead was short lived though as on 56 minutes City’s leading scorer Ryan Sharman beat Constable to a through ball and fired home under pressure to level the score.

City then ramped up the pressure on Beaconsfield  with lots of possession, the home side finding it hard to get much time on the ball. Though Wes Daly and Tre Mitford both put efforts just wide it was the visitors who looked most likely to score and they did just that on 78 minutes when hesitancy in The Rams defence allowed James Hall to nip in and slot past Constable.

A fine save by Constable on 82 minutes ensured City didn’t extend their lead and a minute later The Rams were level as a first time cross by Scott Cousins was met by a clean powerful volley from Minhas to give Bannister no chance.

Three minutes later a Cousins cross was punched clear by Bannister but fell to Minhas who again volleyed home to put Beaconsfield in front and though their was an agonizing five minutes of added time The Rams defence stood strong to repel a tiring City.

Not only a great result but a great team performance from all in a red shirt. To do the double over one of the leagues biggest clubs is a fine achievement indeed and it keeps The Rams well positioned in the table.